This fitness challenge I signed up for so that I could get my body fat checked has seemingly had an opposite effect on me that it has on everyone else. Instead of making me want to workout more and eat less, I have almost stopped working out completely and have been eating nearly everything (baratta, anyone?) I can get my hands on. 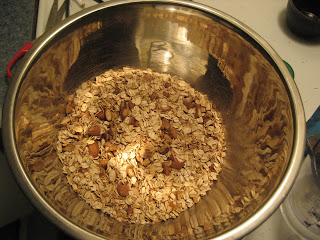 Competition of this kind does not inspire me, apparently. It instead makes me lazy. Or maybe it was coming back from vacation and working the overnight shift? Maybe it was a combination of all of these things.

I have been reading a lot about living a healthy lifestyle, though, so even though I'm not making the healthiest choices I know what I should be doing. Since I was striking out on the exercise front, but my appetite was still in overdrive, I decided, on Day 165 to try and add some things to my diet that are a little more healthy.

Things like granola. Only, in an unexpected, completely confusing, turn of events, I soon realized that all not granola is necessary healthy. Some granolas are loaded with sugar and fat.

Seriously, what kind of crap is that?
Fortunately, I found a healthy granola recipe and made Day 165’s thing I have never done before was to make homemade granola.
The ingredients included, among other things, oats, almonds, walnuts and flax seed. I was happy to see flax seed was listed as one of the ingredients, because to all of the fitness magazines I'd been reading, flax seed is all the rage. I think it might have super powers and I was convinced that once I ate it, I would drop 20 pounds. The only problem is that I had no idea what flax seed was, or where to go in the store to find it. 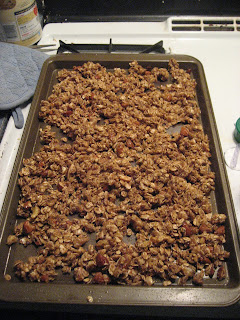 Also, I was in my neighborhood grocery store and apparently the organic, whole wheat, super food craze has not made it to my "transitional" (read: ghetto) East Atlanta Kroger (and I'm not talking about the Edgewood Kroger, that place looks like Whole Foods compared to South Moreland Kroger). Our health food section has been banished to one small corner of the grocery store like it's in timeout for imposing itself on all of the processed foods.

I scanned the small section, already having resolved to go elsewhere if they didn't have it, when much to my surprise (and delight), I found both whole flax seed and ground flax seed. I picked up a bag and headed home.