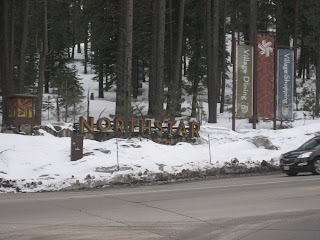 I thought after going through the nerves of skiing again for the first time on Day 159, I’d be raring to go, feeling confident in my abilities. But since we were going to a different mountain, with different runs, I felt like I was starting from scratch. The anxiety and nerves were the same.

Helping to add to the nerves, I fastened my boots too tightly, causing my feet to fall asleep before we even got started. This was an easy problem to fix, but I had to play helpless child asking for Chris and Kristof to help clip me into my skis.

The first run of the day was less than stellar. We started on one of the easiest green hills, which also happened to be one of the most crowded. There were several ski schools in progress and at one point I had to make myself fall on purpose to avoid crashing into a ski train of 5-year olds.

We decided to go somewhere else for our second trip down the mountain. I had, all weekend, blindly followed the more experienced Tahoe skiers wherever they wanted to go. And so far, it was working for me. So when they said we’re going up higher on the mountain, I trusted this must be a different, less populated but still easy, manageable run.

As we started making our way down, I knew right away that this was not a green run. It was steep and felt much like the yard sale run from the day before. 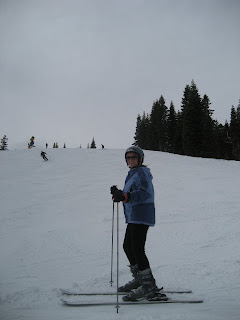 Elizabeth and I both needed a lot of encouragement to get us down the mountain, but we made it. Eventually. When we got to the bottom, Cynthia, Chris and Kristof all smiled and announced that they had accidentally taken us down a black diamond.

Accidentally took us down a black diamond run?

Later we discovered that what they thought might’ve been a black was really a difficult blue. I was less impressed with myself and decided I’d remain suspicious of these three claiming they are taking us down easy slopes. Because to them that apparently means challenging us to go down mountains they know we don’t want to.

We spent the rest of the morning skiing (and Kristof snowboarding) together as a group of five, taking a break for lunch at the Summit Deck and Grill, the highest point at Northstar resort. The restaurant was crawling with skiers, so the people-watching was in full effect.

The bathroom was also crawling with people, especially kids, and the line didn't move very quickly. I couldn’t help but think how short the lines would be for the bathroom at Boots ski resort for adults without any little kids’ butts to wipe. 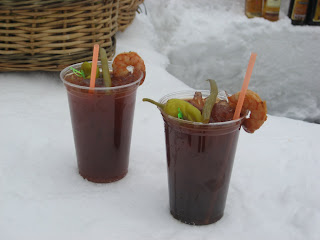 Chris and Cynthia headed straight to the bar, which was outside and made completely out of ice, and started ordering Bloody Marys for all five of us. I know drinking alcohol and inexperienced skiing has disaster written all over it, but they said that’s what skiers do when they take a lunch break, so how could I not participate and get the full experience? That would be like cheating on the things I’ve never done before list. Plus the Bloody Mary was prepared on a bar made out of ice, with garnishes like a fresh green bean and a piece of shrimp and I just had to have it.

We opted to share two entrees, a decision that I was not in favor of at first, because I was starving. But considering I didn’t pay for food, it was brought to me while I did nothing but relax and enjoy my delicious Bloody Mary, I refused to complain. How could I?

The meals included a Renaissance fair-style turkey leg and bratwurst, along with red beans and rice and a salad. I had always wanted to try one of these turkey legs, curious about where the super-sized turkeys yielding such large legs live, and thankful I didn’t have to actually go to a Renaissance fair to taste one (there are things that even I won’t do for this blog). Once again, the team didn't let me down, because between the tasty food and the garnishes on the Bloody Mary, I was full. 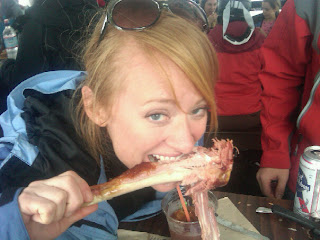 I was also feeling super confident in my abilities as a skier and I was starting to feel the child-like fearlessness I had been longing for. Thank you, Bloody Mary!

After lunch we decided that finally, Elizabeth and I would take on the easier slopes by ourselves and Chris, Cynthia, and Kristof could go down the runs more suited for their level. They went left, and we went right, down a long blue run called East Ridge.

Like usual, we descended down the slope carefully, and slowly. We did well. No falls. No yard sales. When we reached the bottom, we headed towards the lift to go again. My technique on the ski lift since the first day’s mishap had not, sadly, improved. I don’t know why I can’t seem to get the hang of it. I’m either sliding into other skiers or not moving fast enough to keep the line going.

Elizabeth and I shuffled towards the lift, prepared to head to the top of the mountain for the first time, just the two of us. When the operator motioned for us to move forward to where the chair lift "picks" us up, I couldn't quite get there in time, despite Elizabeth's urging me to, "Get up here!"

The edge of the ski lift hit me right in the middle of my body, so while my right butt cheek was on it, the left cheek, actually the entire left side of me, was not. A little scary at first, but I honestly thought that even as the lift was moving I’d be able to wiggle over to the right with ease. Unfortunately, gravity is real. And she’s a bitch. Once my skis lifted off of the ground, my ability to just scoot over became close to impossible and soon I was half-dangling from the lift as it continued ascending to the top. Elizabeth grabbed on to me and with all of her strength tried to pull me back on to the lift. I, too, was trying to pull myself back onto the lift, determined, again, to keep the lift from stopping. Whether or not I would hurt myself if I fell was secondary to the embarrassment I sensed would come if I was responsible for stopping the lift. 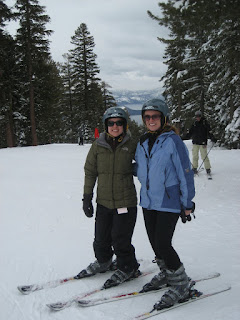 The next 30 seconds were a blur. A terrifying blur. Elizabeth's refusal to let me fall worked, though, and within that 30 seconds (the longest seconds of my life), I was sitting, normally, on the chair.

I think it bears repeating: I. Hate. Ski Lifts.

Completely mortified and so tense my hands were shaking, I started to laugh. I glanced at Elizabeth who shot me a look like, “Seriously, get it together and stop putting me through this.” The terror and the embarrassment were awful, but I paused to be thankful that what had just happened, happened with Elizabeth. She was as nervous as I was, which was comforting, but she had enough sense to grab on and not let go, and she didn’t yell and scream dramatically calling more attention to the situation than necessary.

After mildly composing ourselves, Elizabeth turned to the other two guys on the lift and said, “Bet you’re glad you got on the lift with us!” They smiled, but didn’t seem very amused.

We tried to charm them with our sparkling personalities and a lot of self-deprecating humor, but they were either not interested, still pissed about the chair lift incident, or simply just quiet.

Elizabeth decided she’d try another tactic to gain their friendship: tell them about Boots, and ask them what they think.

So she threw it out there, “So…you guys seem like legit, real-deal skiers (flattery always works), what would you think about an adults-only ski resort?”

We definitely didn’t get a huge response from them, but they warmed up to us a little, entertained our business plan and even gave us some feedback, pointing out, like Kristof had, the fact that skiing is a family activity.

Had we said, “How about a ski resort with only good skiers who can successfully get on and off the ski lift without too much drama?” they probably would’ve been more receptive.

We finally reached the top and I’ve never seen two guys happier to get away from me in my life. Actually, that’s probably not true, but they vanished pretty quickly.

Elizabeth and I skied East Ridge several more times with only a handful of mishaps, none of them super memorable, but one that proved chivalry is alive and well in Lake Tahoe.

At the end of the day, we met the crew at the top of the mountain and skied down to the bottom for our apres ski trip to the bar. Along the way, Cynthia led Elizabeth and I to the right of East Ridge down a mini-mogul run. I hesitated, but only briefly. Moguls, even little ones, are fun, and using the pizza technique is possible, regardless of what the professionals say. 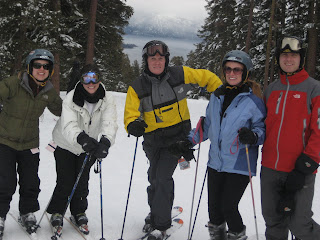 Cynthia's generous parents threw a Tahoe-style dinner party for us, some of their friends, and a couple of Italian exchange students from their church on Saturday night.

Cynthia's mom made jambalaya and her dad mixed up Cosmopolitans. The party was festive, the mood was friendly, so at some point, someone decided to let everyone in on our million-dollar idea, Boots Ski Resort.

Cynthia’s parents smiled and laughed. They strike me as supportive, nice people who would support their daughter, and her weird friends, in whatever insane idea they came up with over dinner.

The Italian exchange students nodded and smiled, but I don’t think they were really into it. There is also a good chance they had no idea what we were saying.

While I assumed our idea for an adults-only ski resort ala Sandals was a big joke, the idea kept creeping into conversation. The more it came up, the more I kept thinking about it and wondered if the others were thinking what I was thinking, "Boots really is a great idea, and we should make it happen."

I guess there are still some details we still need to work out.

Northstar on Dwellable
Posted by Stephanie Gallman at 9:56 AM