On Day 167, I went to a baby shower for my friend, and college roommate, Ashley.

Even though I have attended plenty of these showers and have 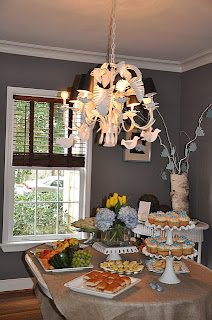 several friends with kids, I still have a hard time believing that we are all old enough to raise children of our own. Thinking about my friends bringing a child home from the hospital and being responsible for shaping another human life for 18+ years is both remarkable and frightening. I'd like to think that when I actually have children myself and have nine months to prepare for them, I will find the whole process less scary, but I'm not so sure.
Since I've hosted and been to plenty of baby showers, so going to Ashley's wasn't particularly different in any way. We ate delicious food, oooh'ed and ahhh'ed over super cute presents, and played a handful of shower games. In general, I'm opposed to these silly shower games, except we played one that I've never played before; one that I found both creepy and hilarious all at the same time.
One of the hostesses, Caroline, walked around the party dropping ice cubes with plastic babies inside of them into everyone's drink glasses. Weird, but whatever, I thought to myself. This was their party and they can drop naked baby ice cubes into drinks if they want to. I never heard anyone explain that the cubes were a part of a game, so I assumed they were just for fun.
So I became alarmed when another one of the hostesses, Allison, looked into my glass, saw that my baby ice cube had melted.
She said, "You won! You have to yell, 'My water broke!'"
I was so tired, I thought I misunderstood what she said. "What?" 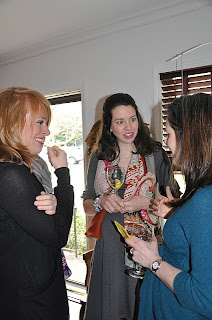 She smiled excitedly and repeated herself, "You have to shout out, 'My water broke!' when the ice melts and the baby is free!"

So these little ice cubes were a game, and the only way I could've won the game, and the prize was to announce to everyone at the party that my water broke. As much as I love winning and love yelling out ridiculous things at parties, I could not bring myself to yell out such a statement in front of people that I do not know.

Surprisingly, my water breaking is not the thing that I've never done before.

At the end of the party, after several guests had already left, a group of us were sitting around chatting. I was fighting the urge to touch Ashley's belly that was completely adorable on her long, lean frame. I know it's weird, but it's hard when there is a basketball-looking thing under your friend's shirt not to want to touch it. Ashley told me strangers have asked to rub her stomach, which I find horrifying, but looking at her I completely understand it. I wanted to touch it too!

"You want to feel him kick?" she asked me.

You would've thought that she offered to give me a thousand dollars.

Permission to touch her belly, and possibly feel the baby growing inside? Yes, please! 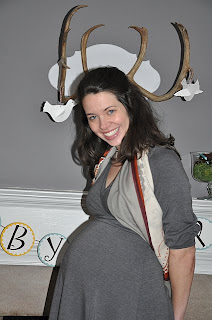 I've tried to feel my other friends' babies kick, but never with any success. They could be kicking up a storm and the second I put my hand on there stomach to feel, the baby would stop. But I think Ashley's unborn baby liked me, because the second I put my hand on her stomach, he kicked me, making Day 167's thing I've never done before feel a baby kick.
I think he was trying to say, "Hey Aunt Steph, get me out of here, I'm ready to play!"
There's no picture of it, but my face lit up like a light bulb. I was so amazed, so excited.
Ashley said her baby kicks her a lot, a thought that I considered for a moment. I don't think I would ever leave my house if I had something growing inside of me that kicked me. I'd want to stay home all day and wait for something to happen.
It may have been just another baby shower, but this one was special because it was Ashley and Baby Hope kicked me. I've never been so happy to get kicked before in my life.
Posted by Stephanie Gallman at 6:52 PM