On Day 162 I purposely missed my flight back to Atlanta, something I'd never done, forcing me to lie about it as one of Day 163's things I've never done.

Before leaving for my trip, my schedule at work changed significantly, leaving me with several extra vacation days upon my return. I figured I'd rather spend those vacation days in San Francisco than Atlanta, so I attempted to change my flight before I left. 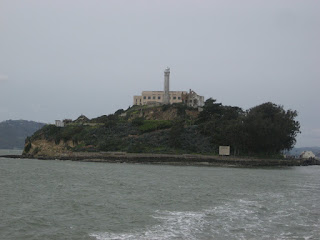 Delta would let me change my flight, but only if I paid $50, plus the price difference between the new flight and the one I'd already bought. That totaled $450.

There was no way was I going to pay that, so I looked into purchasing a one-way ticket from San Francisco to Atlanta, and again, was faced with a hefty price-tag.

So without any other ideas, I decided to play dumb.

I called Delta early on Day 163, took a deep breath, and then exhaled while I spit out a tirade something like, "Hi, my name is Stephanie and I'm freaking out I just drove in from Lake Tahoe and was expecting to fly back to Atlanta tonight and I just looked at my ticket and realized I booked Monday night's red-eye instead of tonight's red-eye and I can't believe that I did something so stupid and I just looked at my ticket and is there anything that you can do please I'm desperate."

I'm a terrible liar, but fortunately I have a flair for the dramatics, so I made sure I sounded as desperate as I possibly could. 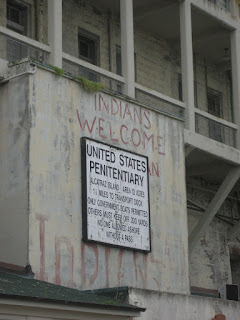 The customer service lady was pleasant enough, but either wasn't in a position to help me or wasn't in the mood to try. She read me my options matter-of-factly: "If you want to get on tonight's flight it will cost $473. There's a flight leaving tomorrow morning at 6:30am and that one will cost you $350. Neither are cheap, but that's all I can do, I'm sorry."

I tried so hard to make myself cry, but as I've said before, crying on demand is not my forte. I whimpered, gasped, and panted instead, "Please, isn't there anything you can do? This truly was an honest mistake."

Yes, I know, another lie, but there was a mistake made here. The mistake was booking my flight through Delta who finds a way to screw me over every time.

"Well," the apathetic customer service lady sighed, "I can ask my manager if she can waive the change fee, but you'll still have to pay the difference for the flight."

I asked for her to ask her manager. Every little bit helps, I suppose.

A few minutes later, she came back to the phone sounding surprised, "Well, my manager has actually agreed to waive all of the fees for you, so if you want, I can rebook you to fly out tonight on the 10:30pm flight."

So there it is, I lied to Delta.
I am a liar.
I don't condone lying ever, but in my defense, I tried to do the right thing before resorting to these tactics, and my lie didn't hurt anyone. And now that I'm back to being honest, I think we can all agree that Delta, and every other airline for that matter, has been sticking it to us for years with luggage fees and oversold flights, so it's about time they got what was coming to them. Plus, there was plenty of room on that flight, so it's not like I took the seat from someone else. 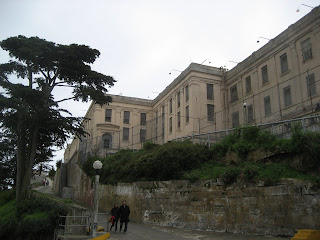 I've changed my tune about Delta, and will sing their praises for their willingness to help me extend my vacation. That is, until they overcharge me for something, which I'm sure will happen soon.

So with a secured seat on Tuesday night's flight, I set out to enjoy my last day of vacation and make Day 163's other thing I've never done before visit Alcatraz.

When my parents brought my brother and me to San Francisco in 1990, I said before that all I remember was riding a cable car and wearing a hideous fuchsia sweater. I often wondered why we skipped Alcatraz, one of San Francisco’s most popular tourist attractions.

Though I’ve never discussed it with them, my assumption now, after having been there, is that my parents didn't take us to the world famous federal penitentiary because I was nine, and my brother was 11.

For most nine-year-olds, jail is an ambiguous place where they lock up the bad people. But Alcatraz is the real-deal. From 1934-1963, the Rock housed some of the most notorious criminals including mobster Al Capone. According to the tour, for many of the inmates transferred here, Alcatraz was the end of the line. 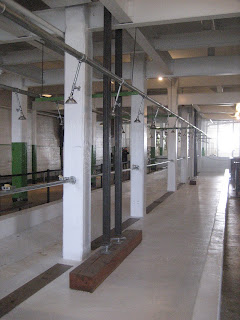 Though I'm not sure I would've understood that at age nine, seeing a real-deal prison might've been too much.

In order to get to Alcatraz, I took a ferry across the San Francisco Bay. The ferry ride, the fresh air, and the view all made the price of admission worth it, and I hadn't even made it to the island.
My friend Trish and her husband Mark had visited San Francisco the summer before and told me going to Alcatraz was, by far, the best thing that they did. I also remember chuckling at the pictures of the two of them at various spots along the tour with their ear phones on and the audio player around their necks, looking like the ultimate tourists.

Soon, I was just like them, completely engaged with my own audio tour, listening to former Alcatraz prison guards and prisoners share their real-life accounts of working and living on the Rock. Their stories are chilling.
I wondered about the men (and it was all men who were locked up at Alcatraz) who became imprisoned there. I wondered if their criminal behavior were kick-started by something small, like a lie to an airline, that spiraled out of control. Maybe not (it was 1934, after all), but I had to question whether or not my lie to Delta earlier in the day could be the start of a life of crime for me.
The tour of the prison starts in the shower, a big, open space where all the prisoners were forced to strip down naked to get clean. I suppose if you’ve been sentenced to any time in prison, getting naked in front of your peers is the least of your worries, but I shuddered at the thought. 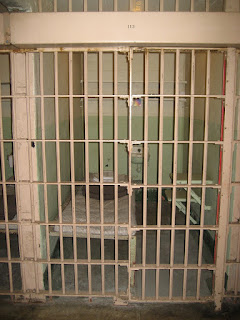 The cells were much smaller than all of the other jail cells I’d ever been in, which, counting Alcatraz, totals one. I guess in all the prison nightmares I’d ever had, my cell was always much bigger. I could stand in the middle of it, stretch my arms out and touch the walls on both sides. If the showering in front of my fellow prisoners didn’t kill me, the claustrophobia of these cells most certainly would have.

The whole tour was interesting, but there are a few highlights I found most fascinating: Most of the guards and their families lived in compounds on the island right next to the inmates. One of the guards' daughters recalls hearing the inmates' activities as she would walk to school or try to go to sleep. I can't imagine growing up next to one of the most dangerous prisons in the country.

There was also an account of a the Battle of Alcatraz, one of the most violent escape attempts in the prison's history. Five people, two correctional officers and three inmates died in the uprising. Another 14 were injured.

The geography of Alcatraz worked to the prison's advantage in that escapes were nearly impossible; the chances that anyone could survive a swim across the harbor to safety are slim. I imagined the geography also worked to jack with the inmates' psyches as well. I mean, it sucks to be at a maximum security at all. But to be at a maximum security prison on an island with views of one of the most beautiful bays and cities in the country must have been the ultimate slap in the face. I found it a little unfair, though, that even through a small cloudy little window, that they got to enjoy the view at all. 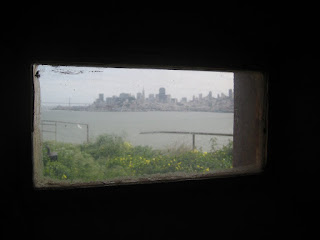 Since I returned from my trip, several people have asked me if Alcatraz is scary, and I wouldn’t say I was ever scared. I mean, prisoners haven’t lived there in many years. But the place is creepy, and I imagine if the walls could talk, they’d have a whole hell of a lot to say.

My brother, who is a huge history fan, has been back to San Francisco several times since we traveled there as a family in 1990, so I text messaged him to see if he’d ever been to Alcatraz. He had not.

My response to him, and my advice to anyone with even a mild interest in history, is, “You have to go. You would love it.”

I was thankful after my brilliant performance on the phone with Delta, I wondered if I was one lie away from a lifetime of crime myself.

After I got onto the mainland, I walked down to Fisherman's Wharf, and ate some clam chowder in a sourdough bread bowl. The bread was delicious, but the chowder at the Boston Sail Loft still gets my vote as the best. 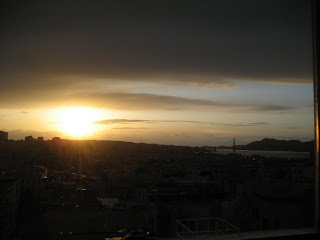 I walked back to Elizabeth and Kristof's and started to feel the trip-ending anxiety that I always get when good times are ending, and reality is staring me in the face. Does everyone get this feeling, or is this an indication that I need to make a change in my real-life?

Before getting into a cab to take me to the airport, Elizabeth and Kristof helped me end my trip to the bay the same way I started it: with a lovely view of the city from the window in their apartment, a couple of glasses of red wine (purely medicinal to help me sleep on the plane), and one more generous helping of baratta (my new cheese boyfriend). Kristof, who had been overwhelmingly generous since I'd arrived actually bought me my own package of baratta to take with me back to Atlanta, but I insisted we eat it right then, not wanting to try and smuggle dairy onto an airplane.

My trip was full of things I'd never done before with old friends, and some new ones, committed to helping me reach my goal of doing 365 things I've never done before. Despite the trip-ending sadness, I had to feel good about that.
Posted by Stephanie Gallman at 9:00 AM