Since I made my first eBay purchase of those 1980s tight ski pants for my trip to Lake Tahoe, several people said that the only way I'd ever get the full eBay experience would be to also sell something.

So, Day 176's thing I've never done before was to sell something on eBay. 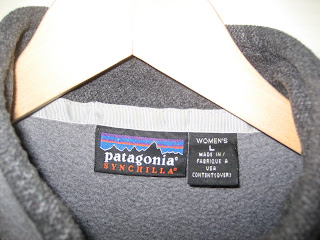 Actually, if we're getting technical about things, I actually sold the item on Day 183 or 184, but it was Day 176 that the sale began.

Deciding what to sell on eBay was both sad and difficult, because looking through my house I realized I have very little that I'm willing to give up that anyone else would be interested in having, much less paying for. I hold onto electronics until they break and clothes until they fall off my body. My apartment is decorated with mementos from my life, but likely wouldn't have value to anyone else.

After digging under my bed and through closets, I found a Patagonia fleece that I received as a Christmas present several years prior that was too big for me. This was a good option, because Patagonia fleeces usually sell for over $100 in stores, so even an older, used one would definitely be worth something. Plus I didn't really wear the fleece much so it'd be easy to get rid of. I find it obnoxious to throw around name brands, but I feel the need to reiterate that this was a PATAGONIA fleece that I was selling. Not some cheap knock-off, this was Patagonia. I'm doing so only to make a point that will (hopefully) make sense later.

I called on my friend Emily, who is a seasoned eBay shopper and seller, for help with this challenge.

She asked me what I was going to sell. I told her that after an hour of rummaging through my things, I'd decided to put an oversized Patagonia fleece on the auction block.

Emily said that sounded good, but she also advised that it's usually best to sell clothing items when they're in season. Selling a fleece in March was probably not the wisest idea, she warned. I understood her advice, and it made excellent sense, but it was all I had. Perhaps some woman going on an Alaskan cruise would find my fleece and we'd make a deal.

I thanked Emily for the advice, but told her my mind was made up to sell the fleece. I was comfortable with whatever outcome. If I sell it for any amount of money, I'd consider it a success because it's been hanging in my closet untouched for at least a year. If it doesn't sell, I thought, I'll write about how much I suck at eBay and try to sell the fleece in the fall. 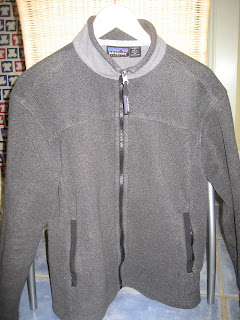 Emily told me to take several pictures of the fleece, showing any damage whatsoever.

I snapped several pictures of the fleece, including one of the tag showing the name brand (apparently that's important in eBay world) and another of the size.

I uploaded them to my computer, and Emily helped me get started filling out a profile for the jacket that potential buyers could view.

She said more descriptive words would help people find the fleece, regardless of what they typed into eBay's search engine. This meant a lot of redundancy. My profile's name was, "Women's Ladies Grey Gray Patagonia Fleece Jacket‏," for example. I uploaded a couple of pictures (which costs money, surprisingly), and set up a PayPal account so when the item sold, I could get paid.

We decided to start the bidding at $9.99, which is fairly standard, Emily told me.

During the seven days the fleece was up for auction, I checked in a few times to see that only three people "watched" my fleece and only one person had bid on it. I was disappointed to discover that Emily was right. I probably would've done better selling the fleece in the spring time. Or maybe this fleece is not as cool as I thought.

When one week had passed and the auction ended, the lucky winner purchased my Patagonia fleece for the bargain price of $9.99, plus shipping. The seller paid promptly, which Emily said had to happen before I shipped the fleece to her.

I'd be lying if I said I wasn't bummed that my fleece sold for less than $10, but so far the sell had gone down flawlessly, so I tried to think positively. It's ten dollars I didn't have before and I'm able to get rid of something taking up room in my closet.

The morning the fleece and I parted ways, I washed and dried it, folded it nicely and shipped her to New Mexico to be with its new owner, Connie.

I wondered what adventures the fleece would go on out there and I'd hoped Connie would show it a better time than I had. In the four years I owned it, I'd only taken it to the gym and a handful of Widespread Panic concerts.

I slipped the clean, neat fleece into a shipping box and said good-bye, feeling nostalgic about all of the fun times we had together, but confident that this separation was for the best. 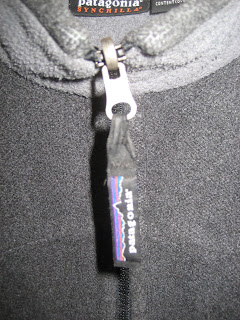 A few days later, I received an email in my eBay inbox, which apparently I now have since I'm an eBay buyer AND sender.

The email read: I am disappointed in item, it arrived dirty and crumbled, I’d really like to return it. How can we settle this? Connie

I was stunned. Shocked. Hurt.

I was also nervous that Connie would report me to the eBay higher-ups and I could be banned from selling anything on the site ever again. I emailed Emily for help, certain that she'd know what to do in this situation. Only it was late, Emily probably wouldn't get my email until the morning and I needed to act fast. Any time wasted could mean Connie reported me and my perfect "rating" on eBay would be tarnished forever.

Shortly after the initial shock and hurt of her response, I got pissed. Like abnormally pissed about a fleece I didn't care about.

I sort of felt like the parent of a child who was chosen last in gym class, or got stood up for the prom.

A million things flooded my thoughts including:

"Ten dollars? For a Patagonia fleece? And you're going to bitch and moan, Connie? Really?"

"Crumbled? The f-ing fleece traveled more than 1000 miles to get to you in a box more suited for a Barbie. Perhaps it "crumbled" during shipment, you dumbass."

I instantly typed an email response that included a lot of passive aggressive language and a sentence that said something to the effect of, "I would be remiss not to remind you that you did purchase a Patagonia fleece for $10, so perhaps you might be happy with that." I reread before pressing "send" and changed it to:

I promise the fleece is not dirty, as I literally took it from the laundry to the post office to mail to you. As far as it being "crumbled," is it possible it was wrinkled during shipment?

Regardless, I don't want you to be unhappy with the item or pay for something you don't want, so I'll gladly take it back. I've never dealt with returns on eBay, so if you'll tell me how to proceed, I will do so.

Perhaps it was my email, or perhaps Connie came to her senses and realized that getting a Patagonia fleece for ten dollars actually is a good deal, but I never heard back from her after that.

I check my eBay account weekly, however, just to make sure she hasn’t reported me or posted any nasty comments about me, crumbled fleece girl.

I'd bet money that the crumbled Patagonia grey/gray fleece shows up during the fall on eBay, and if it does, I may buy it back, just because I'd prefer it living with me then that ungrateful bitch Connie.
Posted by Stephanie Gallman at 5:47 PM