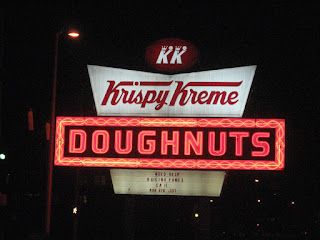 More often than not, I have my friends to rely on for help. On Day 178, I found myself in a circle with four of my co-workers all fiercely loyal to the blog, all of us trying to come up with something that I’ve never done before. It’s days like this when I don’t think the blog was a good idea. I think it was a great idea.

Nah. No spray tan (this should not be the reason I didn't want to go streaking, but sadly it is).

My friend Tray, who was not among the group discussing options, text messaged me and invited me to Hal’s to try a cigar for the first time at Hal’s a steak restaurant in Atlanta. I do want to do that, but I’ve never eaten at Hal’s either and I want to make the night an entire experience. Dinner, wine, and cigars.

So there we were, scratching our heads when finally I offered something that Mo and I had already talked about doing, “Krispy Kreme, hot off the line. I’ve never done it. Who’s in?”

There wasn’t any opposition to the idea, but I got the feeling there was a little disappointment, like this was too easy or something. And I’m sure I felt sad, confused feelings coming in my direction that in 29 years I had never done this before. But still, who can be disappointed about Krispy Kreme? Not wanting to let me or the blog down, we all piled into cars and headed to Ponce de Leon Avenue to Krispy Kreme.

I had eaten numerous Krispy Kreme donuts over the years. For some reason in high school clubs used to sell boxes of them as fundraisers which I found both odd and gross. 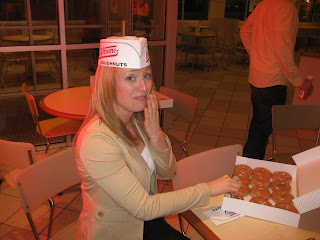 Eating them as they are first ready, “Hot off the Line” was a completely different story however, and was something I needed to experience.

Several of our crew were seasoned Krispy Kreme eaters.

“I mean, our house is right there,” Amanda said, pointing to her and husband Stephen’s place, “so sometimes on Sundays we’ll walk up here and get a box.

She stopped herself, feeling as though she revealed too much, “I mean, ‘a couple.’”

Atlanta’s Krispy Kreme is a big, well-lit place on a main thoroughfare. Despite the flashing lights and accessibility, I’ve passed Krispy Kreme numerous times before but had never stopped.

We all walked up the counter and Mo ordered two dozen donuts for five people. I mean, I knew it would be good, but that many donuts felt a little unnecessary. I soon found out he had big plans.

Amanda warned me while I was in line trying to decide what to drink, “Don’t try to dip the donut in coffee, it will disintegrate.”

I don’t know why she felt it necessary to tell me this because I had no intention of drinking coffee. It was around 10pm, first of all, and I was looking for something to drink that would make me feel less badly about eating a fatty donut. I also felt the need to be 8-years old again, so I drank milk.

We took the donuts to the table and I sensed a feeling of urgency. “Hot off the line” only lasts for a little while, so I needed to experience this right away.

So I picked up the first one, Amanda grabbed the camera and I took a bite.

The donut didn’t need hot coffee to melt in my mouth. It was unlike anything I’ve ever tasted before. Sweet and delicious. I didn’t think so before, but I believe it now: a warm Krispy Kreme donut is proof that God loves us and wants us to be happy.

If you haven’t done this, you must. Wait until the sign that says, “Hot donuts now,” and forget about where you are going and turn your car into the parking lot. If you don’t live near a Krispy Kreme restaurant, I am personally inviting you to Atlanta to eat one. Seriously. You can stay at my house. You must try one.

While still basking in the donut’s glory, Mo, no surprise, suggested we have a donut eating 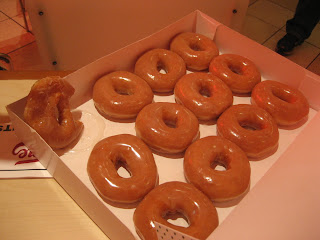 contest. As much as that sounded like a delicious idea, I knew it would make me sick. Plus, I believe Krispy Kremes are meant to be savored, not eaten in haste.

The boys went for it, though, and I filmed it (unfortunately because my computer hates me I haven't been able to upload despite numerous tries, but picture any eating contest with three dudes and donuts).

Mo, always a winner, polished off an impressive five in one minute. Justin ate three, and Stephen, despite living closest to the Krispy Kreme only finished two.

As we sat there, watching this disgusting charade go down, Amanda pointed out that the donut changes so quickly after it comes off the line, that even a 15-minute old Krispy Kreme is different from the one I just ate.

I don’t think I’ve ever in my life eaten two donuts in one sitting, but this felt like the right thing to do, so after the competition was over, I tried another.

I laughed at myself, thinking about how many donuts I’ve refused over the years, and here, only to be here at Krispy Kreme, polishing off two in less than an hour, all in the name of the blog, of course.

It reminded me of a wedding I went to in Philadelphia last fall. I passed on the filet mignon at the reception, explaining to everyone around me that I didn’t red meat. Hours later at Geno’s Cheese Steaks, however, I had no problem inhaling a Philly cheese steak. Clearly I have no problem abandoning rational thought when food is involved. 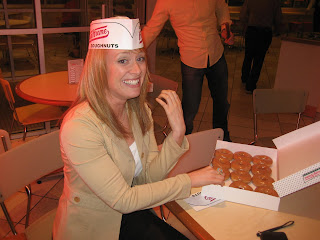 We sat around for a while at the restaurant, until one of the employees told us they were closing. I’ve been told to leave many bars over the years after last call was over, but getting kicked out of a donut shop? Definitely a first, and definitely a personal low.

The sugar rush that follows two Krispy Kreme donuts came on after I’d already made it home. I was up late, my mind unable to slow down. My body had the sugar shakes, which I would love to tell you I channeled into something positive like spring-cleaning my house or reading a novel. Unfortunately I have little to show for my late night.

A “Hot off the Line” donut is a special treat that I can’t do often, but one that I will be enjoying again. Hopefully sooner rather than later.
Posted by Stephanie Gallman at 9:00 AM