Day 174: Sisters in the Highlands

My brother Jeff and his wife Katie came to Atlanta for an engagement party on Saturday night. So, we had the entire day to hang out together. A whole day of blog possibilities.
I begged Jeff to let me set up a Facebook account for him as the thing I'd never done before, but despite understanding the obvious networking possibilities Facebook provides, he can't bring himself to join. So I'd have to find something else to do.
Unfortunately, what I quickly learned is that one 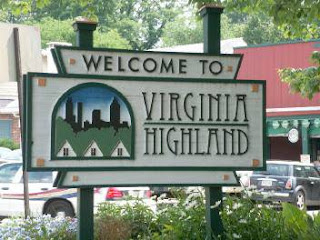 of the problems with having loved ones in town in town on a beautiful day when there is basketball on television is that all I wanted to do was stuff I'd already done before, like daytime drinking and watching sports.

Plus, hanging out with my brother married was something that I'd already done before on Day 62. But this is the first time Jeff and Katie had been to Atlanta to hang out since getting married. So Day 174 was a day of a few firsts, none of them particularly significant.

We headed to Virginia-Highland to grab some lunch and stopped by the neighborhood's farmer's market, something I'd never done before. Maybe, I thought, Jeff and Katie could find something for their house. I love farmer's markets and I love Virginia-Highland, so how could we go wrong?
Maybe we hit this farmer's market on the wrong day, or at the wrong time of day, because I found it all to be a little sad, a little lame. Instead of eclectic, creative crafts for sale, it felt like a bunch of random people gathered up miscellaneous crap from around their houses, displayed said crap on a card table, fully expecting innocent shoppers to buy it right up.
I would've been offended, had I not also tried this technique when I was six-years old. After several successful lemonade stands, I decided to up the ante and just start selling my personal belongings from my parents' driveway. My dreams of becoming an entrepreneur were shattered when some neighborhood kid picked up one of my used coloring books for sale and said, "No one is going to buy this!"

I wouldn't have ever shattered anyone's dreams like that guy did to me, but I did make a mental note that the farmer's market in Virginia-Highland is not all it's cracked up to be. 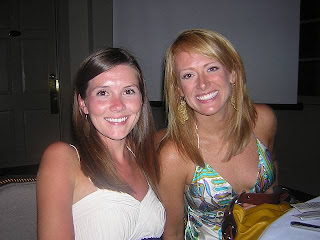 We spent the rest of the afternoon walking to several places around the Highlands and enjoying the afternoon.
I love hanging out with my brother and Katie, and I enjoyed introducing them to some of my friends in Atlanta that they'd never met.
Despite having only known her for three years, I really think of Katie as the sister that I never had. In fact, at their rehearsal dinner I joked she's the sister that I never knew I wanted. She fits so easily into our family, I can't remember her not being around. We joke around and have a relationship that feels much longer than the time we've spent together.

When we got back to my house to get ready for the party, it was fun having someone to get ready with. We helped each other pick out clothes and I even attempted to play hairdresser, taking a curling iron to Katie's hair. An attempt that was less than stellar, but my heart was in the right place.

Katie jokingly asked me, "Stephie, is the thing you've never done before to do your sissy's hair?"

Indeed it is.
Not necessarily life changing, but still new to me.
Posted by Stephanie Gallman at 9:06 AM