Day 171 was St. Patrick's Day (I know, admitting that gives me anxiety. I'm behind, but I'm trying.) and I came into work feeling like a million bucks, having slept a full 12 hours the night before. Thanks Ambien!

My alertness was in sharp contrast to others in my life who celebrated St. Patrick's Day on Tuesday.

The first was my mother, who during her Ambien-email tirade revealed to me that she had - in her words- "gotten a little silly," with her girlfriends drinking sour apple martinis at Bunco the night before. Interesting that she was so free with this information, I thought, because she is constantly telling me how much she hates it when I talk about drinking in the blog, which according to her, is a lot.

My drinking habits are no different from most people that I know, I've told her. The only difference is that I'm writing about it. 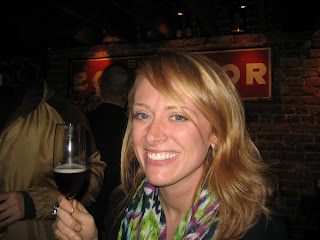 Still, at my mom's request, I'm marking this entry and everyone that follows with the the tag, "Drinks," so she (and you) can track all of the times I talk about drinking. Mom, consider this your warning, I'm about to talk about a new cocktail I tried on St. Patrick's Day.

Elizabeth was the second person who celebrated St. Patrick's Day a day early. I asked her how her day was going and she told me she wasn't feeling well.

"Too many black velvets," she replied.

A black velvet is a cocktail that she and Cynthia drank at their cooking club the night before. The drink is simple: Guinness and Champagne mixed together.

"Yikes," I said, "That sounds disgusting."

"Suprisingly, it's not," she told me "The bubbly really cuts the heaviness of the beer."

Who gives a shit, I thought? I drank a Guinness on Day 124 and the beer's heaviness is not worth mixing it with champagne to make a new drink that I can only imagine tastes completely dreadful. But still, I considered, if she has a headache, she may have enjoyed more than one. So maybe I should give them a try.

Day 171's thing I've never done before was to drink a black velvet. 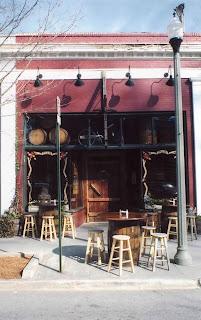 Maribeth and I had already made plans to celebrate St. Patrick's Day at one of the best bars in the Atlanta area, the Brick Store Pub in Decatur. I am not Irish, though my hair and complexion would indicate otherwise. I get the crazy looking hair, without the free pass to drink like a moron. Still, I always like a reason to celebrate and go out during the week, so, "Erin Go Bragh! Let's drink black velvets!"

The Brick Store, like every bar everywhere, was packed on Wednesday night. Maribeth and I stood behind the people sitting at the bar and shouted over them to the bartenders. Which was tough because I wasn't completely confident about what I was ordering.

"Can I get a black velvet?" I asked, timidly. I hoped someone behind the bar would know.
The bartender, a short, leprachaun looking fellow kind of paced back and forth behind the bar like he knew what I was talking about, but not really.

He disappeared for a moment and then returned, stood in front of me and loudly spoke over the people sitting at the bar.

"See, I can't make that because I don't have cider on draught," he said.

I furrowed my brow, confused.

Two older gentleman turned around and stared at me like I had horns and a tail.

"That sounds terrible," one of them said to me.

"I know! Doesn't it?" I said, thinking that our agreement over how disgusting this drink sounded would solidify our friendship.

It did not. The guy rolled his eyes at me shook his head, and turned back around in his chair, ignoring the back and forth between the bartender and me.

"Ok . . .hold on . . .," I stammered to the bartender.
I immediately text messaged Elizabeth, "Are you serious about the black velvets? I'm at this bar and just tried to order it and they don't know anything about it." 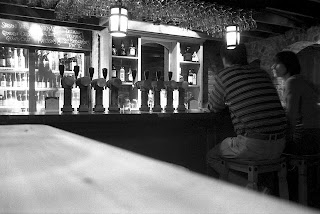 While waiting for her to text me back, I went to my Blackberry to consult the Internet. Certainly if this drink exists, Google will know. I'd been at the bar for a total of 15 minutes, and so far I'd ordered a fancy drink that no one has every heard about and now I'm texting and surfing the web on my phone. I wasn't exactly the "bar favorite" at that point, I don't think.

Sure enough, Google knew all about it. According to several web sites, a "Black Velvet" is a beer cocktail made from stout beer and sparkling wine or champagne.
By this time, Maribeth had ordered a beer and another bartender came out from behind the bar to hand deliver it to her. He looked at me, confused, assuming he forgot to also get my drink.

"Yes!" I shouted, louder than I should have and before he could finish his thought. I don't know what I was more excited about: the fact that black velvets really do exist or that I was finally going to get a drink.

"Do you want sparkling wine or champagne?"

I gave him a look like "Does it look like I care? I didn't even believe that this drink existed five minutes ago. You can make it with whatever you want."

"Whatever you think is best."

Five minutes later, my now favorite bartender slid a champagne flute across the bar in my direction.

So if everyone in the bar didn't already hate me for ordering a drink that no one except for this one bartender had ever even heard of, now I'm drinking what looks like a Guinness out of a champagne flute at a place that usually serves up microbrews in pint glasses.
Pretentious, party of one.
I cautiously took a sip of the black velvet, still not believing that a concoction of these ingredients 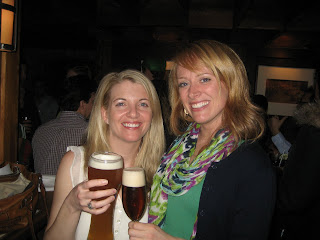 could ever taste good. But Elizabeth was right, black velvets are delicious. I can't tell you what it tastes like because it doesn't taste like anything I've ever tasted before. But I understand what she meant by the champagne or sparkling wine cutting the Guinness' heaviness. I can only really drink one Guinness, but I could drink black velvets all night.

The drink did attract a lot of attention, or maybe it was our charming personalities and insane good looks.

Nah, it was probably the drink.

Those that dared to ask about the black velvet were rewarded with a variety of answers. Sometimes I told them it was just Guinness, but that I like drinking out of a champagne flute so I carry one with me at all times.

Most of the time, Maribeth and I took turns telling people what it really was, which led to telling them about the blog.

One of the guys that we met was completely unimpressed with Project 29 to 30. Not only was he not impressed, he was angry that I would waste his time telling him about some of the less adventurous activities I'd done as a part of the project.

He seemed mildly intrigued by the the whirlwind vacation I took with Mountain Man, but overall, my attempt at doing things I've never done before really seemed to piss him off.

I kept trying to defend myself, tried to explain to him that I don't have the money or the time to travel the world and do adventurous things every single day. I'm simply attempting to do new things in the context of my regular life.

I later found out from someone who knew angry guy that he had recently married a girl from another country so that she could get her green card, so clearly his sense of adventure is much greater than mine.

Whereas wearing red nail polish or learning to play the banjo present two challenges for me, tricking the Federal Government is more his speed.
To each his own, I guess.

A few black velvets later and we called St. Patrick's Day an enormous success. New friends, we pimped the blog, and a new favorite cocktail that I will definitely be enjoying again.
Posted by Stephanie Gallman at 11:00 PM