Lucky for me, I worked early on Friday and was therefore able to leave early to enjoy the beautiful day and get ready for my brother and sister-in-law who were coming to town.

The warm weather made me want to do something "springy." 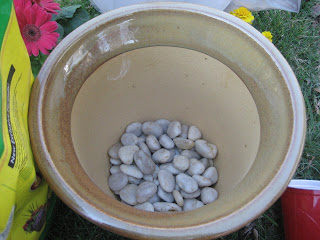 Day 173's thing I've never done before was to garden.

Maybe "garden" is a stretch. Actually it's a huge stretch. Because I don't have a yard, I had no place to actually garden. So let's make that Day 173's thing I've never done before was to pot a plant.

Going into Lowe's was a little bit intimidating, since I do not come from a line of seasoned gardeners.

After years of trying to plant something, anything with no success, my parents eventually gave up on ever having a good-looking yard at the house I grew up in. My mom spent a great deal of time and money trying to make it happen before finally convincing herself that something was wrong with the dirt. I believed her, until the next owners of that house went on to win the neighborhood's "Yard of the Month" award several times. What a slap in the face.

The staff at Lowe's seemed determined to help me succeed at this task. Every person I came into contact with was super friendly and helpful.

I wondered if there might be a lot of fertilizer and special ingredients needed to make this happen, but the sales guy said it was simple as he pointed to tell me what I needed to buy, "Pots, rocks, dirt."

Then he pointed towards an array of flowers and said that they were all annuals and best suited for this project.

I shot him a look of confusion.

"Annuals . . .meaning that they'll come back every year."

I like the idea that this plant will yield flowers for many years to come, but I think this guy may have given me far too much credit. If the plant lasts until the end of the summer, I'll consider it a success.

So I walked to aisles to pick my flowers, proving once again that one of my worst character flaws is indecisiveness. I paced up and down for half an hour, as if this decision could make or break me.

When I got back to my house, I removed the pot and dirt and flowers and contemplated where I could execute the plan. I pay rent on time, but the yard in front of the house where I live, even after five years, still doesn't feel like mine, so I actually asked my landlord where he thought I should pot the plant.

He looked at me like I was an idiot.

"Why don't you just do it right there on the grass?" he asked me. 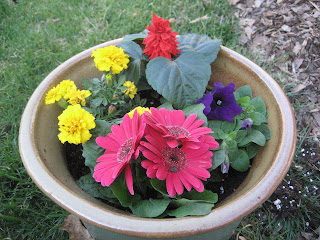 I filled the bottom of the pot with rocks (this apparently keeps the soil from washing out of the bottom when the plant gets watered) and then dumped the dirt, and then planted the flowers that I chose.

The result was a beautiful springtime present that I gave to Jeff and Katie when they arrived at my house later that night. They seemed pleased, but also mildly confused by the gift.

Perhaps because giving a plant is somewhat a reverse gift. I do a little bit of work on the front end and then pass the responsibility on to the gift recipient. Not quite as bad as a pet (though if I have nieces and nephews, I'm totally giving them pets as gifts), but now it's up to them to keep the annuals alive.

I visited my brother and sister-in-law a week after giving them their plant and it seemed to be doing well. Due to the Gallman's luck with plants, hopefully Katie is tending to it.
Posted by Stephanie Gallman at 8:44 PM