My friend Maribeth is training for a mini-triathlon, hence all the bike riding we've been doing. She tried to get me to participate with her, but I wasn’t sure that I’d have the stamina, or the time to commit to training, while also trying to do 365 things I’ve never done before.

Also, I’ve seen the outfits that triathlon participants wear and I’m just not sure I’m ready to go full on body suit in front of other people. 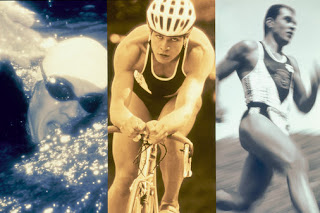 But I’m a good friend, and I needed a little boost on the exercise front, so I agreed to help Maribeth with her training. The weather had finally improved, we no longer had to be banished inside a gym, so on Day 169, the thing I've never done before was attempt a bike ride, followed by a run.

I’m not sure why I was feeling so ambitious here because I'm not the greatest biker. I'm slow. Plus the wheels on Maribeth's bike are much larger than mine, so she's often several yards ahead of me on our bike rides. Plus I’m slow.

The distance between us makes conversations difficult. I thought conversation (i.e., gossip, pointless complaining) was the reason for an exercise buddy, but when it’s the two of us, that usually involves me shouting at her and her straining her neck to turn around and look at me.

We put our bikes away and started running and I felt like a fool. Running is such a different movement than biking and when we dropped off our bikes and started to jog, I felt like I didn’t have control of my legs. It felt like they were flailing independently from my body, like the cast of Riverdance (thank you Friends for that reference, I wish I thought of it on my own).

Admittedly, it was me who asked if we could stop running, after a short jog up Maribeth’s street. I was spent.

Moral of the story here is that I can run. I can swim. And I can bike. Doing all three (or even two) of them in succession, however, now that’s a different story.

But cheering Maribeth on? That I can do. And I will.
Posted by Stephanie Gallman at 4:39 PM