The weekend had finally arrived and on Saturday I had plans to see the Trey Anastasio Band (T.A.B.) at the Tabernacle. For those of you following along, this is the concert I bought a single ticket to on Day 106, in an effort to stop buying concert tickets in bulk.

Though nerve wracking to go out on my own, I had a feeling buying one ticket to this show would probably be fine, because there would be a lot of friends interested in going that I could cruise with.

Sure enough, I was right. 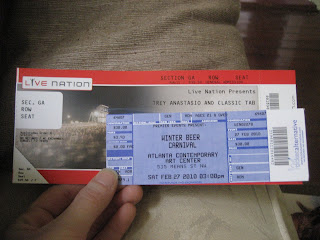 Not only did a T.A.B. crew come together in high numbers, they also made plans for a blog activity ahead of the concert.

Two of my favorite things, beer and carnivals, combined? Count me in.

Only I think I set my expectations a little high for the event, and therefore the day didn't exactly get off to a great start. Or maybe I'm just old and grumpy and would prefer drinking at home than get out and deal with traffic, parking and people.

The organizers of the beer carnival, according to Melanie, made it clear on their website that parking was limited down by the contemporary arts center, so they encouraged taking public transportation or carpooling. Apparently they forgot we live in Atlanta and public transportation here doesn't really go anywhere.

Moral of the story: I had a difficult time finding a place to park. I was met by road blocks, police officers, one-way streets, all keeping me from my final destination. Once I did find an illegal place near Georgia Tech, I headed towards where the carnival was being held. Only not really, because I just ran into a long line of people waiting to get into the carnival. My friend Mike warned me about the line and said they had managed to accidentally skip ahead of everyone waiting when they went to pick up their tickets.

This is when I started to feel old and grumpy. I try to get out and enjoy the festivities that the city has to offer, but when faced with adversaries like long lines and traffic, I assume give up and go home. "Enough with the gimmicky festivals and carnivals! Just let me drink a beer!" But I already had my ticket, so I had to wait with the crowd overly-excited recent college graduates ready to party in the afternoon. 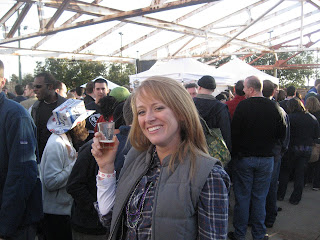 When I finally got to the front of the line and had my ID checked, and one of the staff members handed me a plastic Dixie cup and five tickets. Having just stood in line for 30 minutes, I could feel my blood boiling and I started to get irate, assuming that these five tickets were to be cashed in for five, four ounce beers.

The guy cut me off before I could finish.

"Those are for the games."

The day was starting to improve. I headed inside and ran into some other friends I wasn't expecting to see and talked to them for a bit. They pointed me in the direction of the T.A.B. crew and I was able to track them down. My friend Mike is 6'6", so that helped considerably.

And then the beer tasting commenced.

The week leading up to the carnival, super-planner Melanie suggested, and crafted a spreadsheet like she did back when we were headed to Palm Springs and I scoffed.

"Isn't the goal of a beer carnival to try them all?" I asked in an email.

"Well, yes," she said, "but a spreadsheet will help you mark the ones that you like, don't like, ones that you want to try again."

I'm sure I rolled my eyes at my desk. But then I thought of all the fun I had with Melanie and Team Spreadsheet/Temecula in Palm Springs on Days 33-36. I scoffed at their spreadsheets back then too, but thanks to all of their planning, I ended up partying at a mansion on a golf course. So I agreed that though I may not participate in keeping up with a spreadsheet, I'd at least support Melanie's cause and print off copies like she asked me too. 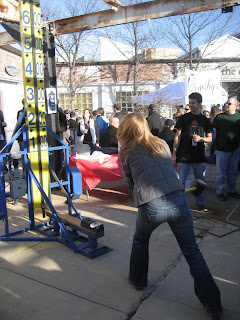 And then I left them at work.

Thankfully, no one asked me for one (and no one at work found them and assumed I was an alcoholic either).

The event was about what you would expect from a beer tasting. Lots of tables with beer reps filling everyone's small plastic Dixie cups with their special brews. It was fun. I didn't try any beers that changed my life, but I had a good time.

As advertised, the beer carnival did have carnival games, and despite no natural athleticism, I was on fire playing them. Well, most of them. I used all of my tickets and Bug's to knock down milk jugs, beer cans and puppets, all with great success.

I don't know that this is actually what it's called, but it's the game that Popeye used to always play, and win, to impress Olive Oil. The game where you take a mallet to hit a base with enough force that it will send a puck/chaser up to ring a bell.

Bug took the mallet out of the facilitator's hand, hit the base and the bell rang. She did it several times, and made it look easy.

I had never played this game before, but I am pretty strong, so I thought I'd be able to at least give it a good effort and not embarass myself. Plus I was dressed like a lumberjack, so I thought I'd have no trouble.

I can think of several reasons why I was so terrible at this game, despite its easy concept. First of all, the mallet was much heavier than I thought it was going to be, and I wasn't quite sure the best way to swing it. Plus there were several people standing around watching me to see if I was going to choke, and they were standing so close to me, I felt crowded even though I really wasn't. And finally, it occurred to me when I stepped up to take a whack at it, that I'd been drinking beer for a few hours. The possibility for injury to myself or someone else was quite high.

On my first try, I whiffed. Didn't hit the target at all. 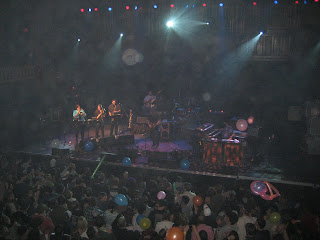 The mallet hit the ground and all I could do was turn around to look at my friends and laugh at myself. I also started to sweat, my heart started racing and though I couldn't see it, I'm sure my face was bright red.
I should've stopped right then, acted like a complete damsel in distress and passed the mallet to some cute guy to save the day, but of course, I didn't think of such a move until after the horrible experience was over.
No, instead I tried it again. And I whiffed, again. I tried it a third time and hit the target, but the puck didn't move much higher than the second line. That's two out of a possible ten to ring the bell. Embarassing.

The fourth and fifth times were much like the others. I can't remember exactly, but I either missed the target completely or hit the target and barely moved the puck.
Melanie had considered giving it a try, but after watching my piss-poor performance, she passed. Smart move on her part.

After a while, we completed our marathon day by heading to the Tabernacle to see the T.A.B. Once again, weak link over here managed to be with the group who already secured a place in line to get front row balcony seating at a General Admission show. I love my friends who think ahead, and I fear the day they figure out I'm adding little to their organization.

I've seen the Trey Anastasio Band before, several times, but this was the first time I'd ever seen them cover "Sultans of Swing," one of my favorite songs by the Dire Straits. Another thing I've never done before and a great time. A great day of firsts.
Posted by Stephanie Gallman at 10:55 PM