On Day 152, I met some friends at Cavern in the Highlands for a going away party. I usually hate this bar, because it's always crowded and difficult to move around in, but since the crew that I was meeting was already there and had already established a place right in front, I actually enjoyed it.

My friend Andrew asked what the thing I'd never done before was for that day and I told him I hadn't come up with anything yet, so I was open to suggestions. 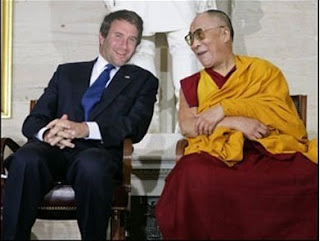 Robbie, who I had only met a handful of times before, was sitting next to me and he appeared confused until I told him about the blog and my goal to do something I've never done every day for one year. His eyes lit up and I could tell his mind had kicked into overdrive as he tried to think of a way to get involved.

"Have you ever booty-danced with a guy in a wheelchair?" Robbie asked me.

I've booty-danced with a lot of people over the years, so I had to think about it.

And immediately, he wheeled back from the table and away we went, making Day 152's thing I've never done before owning the dance floor with my new favorite person, Robbie.

Surprisingly, the best thing about this night wasn't the dancing. I mean, that was great too, because Robbie's dances better than a lot of people that I know, and we have the same taste in music. And though he grabbed my ass far more than I would normally allow someone that I just met, I really can't blame him. I mean, it was right there in his face. What else was he supposed to do?

No, the best part was that I have an inkling that when I met Robbie, I met someone who is going to become a big part of this blog. He's down for whatever, whenever, two qualities that make for a good blog participant. Among the other things we started planning, included paying a visit to the Tupac Shakur Center for the Arts in Stone Mountain.

We also considered including Robbie's cats, Mr. Pickles and Olive in our adventures, though I'm not sure exactly how we're going to do that.

I'm thinking, with permission from the people who run the Robbie Svoboda fan club on Facebook, the name of my blog may soon change to "The Adventures of Stephanie and Robbie."

Things could get very entertaining and/or very illegal pretty soon.