Since first appearing in Day 135's blog about King Cake, my friend Tray has longed for more blog appearances. He actually offered to join me on Day 149's outing at the Glenwood, but that would've defeated the entire point of me going to the bar on my own. We made plans to hang out on Day 150 instead.

Tray made several suggestions on where we could go and I chose 10 Degrees South in Buckhead. It was the place I had never been to, making Day 150's thing I've never done before to eat South African food. 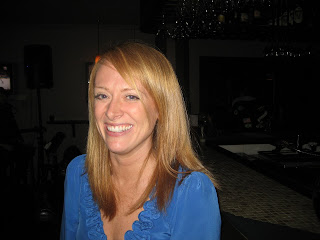 According to the restaurant's website, South African cuisine is a fusion of French, Portuguese, Dutch, German and Malaysian cuisines with heavy Mediterranean influences. I've eaten most of those cuisines before, but a fusion of all of them was going to be interesting.

When we walked in, I was pleasantly surprised at how crowded and happening the place was for a Wednesday night. These are my kind of weekday party people.
Tray had been to 10 Degrees South before, so he led the way through the restaurant to the less formal bar area, where we were going to eat. On our walk to the back, I glanced to my right and through the glass doors in the hallway was a room full of television cameras, a crew, and lights.

I stopped abruptly and stared through the door.

"Are they filming a movie?" I asked loudly and excitedly to no one in particular. I was sure that I was about to make Day 150 about much more than South African food. If I could just get a hold of one person, a director or a producer, I could tell them all about Project 29 to 30 and they could make me a star!

Or at least just let me walk around in the background of whatever production was going on. I'll take what I can get.

I recognized one of the guys sitting on the couch in the room as Bert Weiss, a cast member of Atlanta radio's "The Bert Show." I don't listen to the popular morning show regularly, but the last time I listened, Bert was weighing the possibility of joining the cast of a reality program about men in Atlanta similar to the "Real Housewives" series.

Evident by what I was watching go down through these glass doors, Bert's decision had been made. 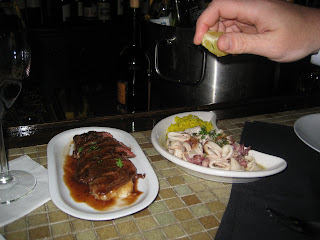 I marveled at how "unrealistic" this little scene seemed to be. Five guys sitting awkwardly close to each other on a couch, sipping on cocktails, trying to engage in conversation with at least a dozen people standing around them either holding cameras, microphones or simply gawking at their every move.
I'm certainly not naive to the fact that reality TV is somewhat scripted, but absolutely nothing about this scene appeared authentic. I was somewhat disappointed, as I had always secretly hoped that the women of the "Real Housewives of New York" are as terrible and nasty as they seem on television. But maybe it's all in the production and editing?
The shoot ended with an orchestrated toast that included all of the men rising from their seats at the same time and chinking their glasses together. I say "orchestrated" because I've never seen a group of men actually do something so cheesy before and I can only assume that some female producer came up with the idea and instructed them to do it.
I never had an opportunity to sneak my way into the production, unfortunately. I plan on keeping a close eye on Bravo for the release of this show, though, in hopes that I will see that scene, and be able to shout to all of my friends, "I was there! I was there when they filmed this!!!"
When we sat at the bar and spoke to the bartender, she confirmed that they were filming a reality show. We watched the "cast" exit the room and mill around the bar for a bit and I made Tray take my picture with some of them in the background before he ordered a drink. And then I, for the second night in a row, intently studied the wine list, determined to make the right choice. 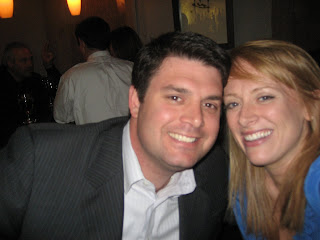 Rigal Malbec was not on the menu, sadly.

“I feel like I should drink South African wine since we’re at a South African restaurant. You know, to get the whole experience,” I said to Tray.

Tray smiled, but he was probably thinking, "this girl is a loser." Regardless, he is certainly becoming more and more aware at how authentic I aim to be with the blog. He motioned towards the guy singing cover songs with an acoustic guitar and said, “I could see about replacing that guy with Dave Matthews. He's South African, right?"

Tray is catching on. What a fabulous idea!

We ordered the sliced rump steak served over potatoes and the grilled calamari as appetizers. The steak was great, for steak, but I loved the calamari. The only calamari I had ever eaten was fried, but I like it so much better grilled. It was light and delicious.

Tray and I consulted the bartender about what we should order for our meal. The appetizers were pretty filling, so we opted to share an entree. Going for 100 percent authenticity, we wanted the most South African item on the menu.

She instructed us to order Bobotie, a sweet ground beef curry topped with savory custard that is baked until golden brown. It was served with yellow rice and sambals.

We were about to tear into what was the equivalent of a beef pie, when Tray revealed to me that despite coming from Louisiana and enjoying cooking himself, he doesn't really have adventurous tastes in food. I was concerned and not at all confident about how this was all going to go. 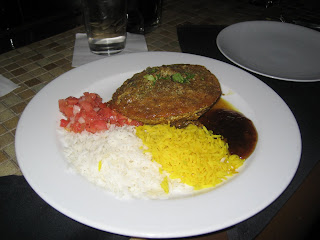 We both took a bite and looked at each other for a reaction. Tray looked a little confused, which I understood. The flavor was strange, but not in bad way. Tasty, but odd. I was confused by the dish, too, really, and I kept taking bites to try and figure out if I liked it or not. It was beef, but it was sweet. I truly don't know what is in Bobotie or how it is made, but after several tries, I came to the conclusion that I did like it, even if I didn't completely understand it.
Tray, on the other hand, wasn't sold, I don't think. He said he liked it, but I wouldn't say this meal has moved to the top of the list of his favorite things to eat. I'm pretty sure we may go back to the more predictable and familiar Mexican or New Orleans cuisine for our next outing.
I'm sold on South African food, though, and I'd like to go back and try another dish on the menu. 10 Degrees South is a cool spot full of interesting people, and not just Tray and me.
We ended Tray's second blog appearance with Girl Scout cookies and a huge round of the name game with Tray's roommate's girlfriend. Not a bad Wednesday.
Posted by Stephanie Gallman at 5:25 PM

Email ThisBlogThis!Share to TwitterShare to FacebookShare to Pinterest
Labels: Tray