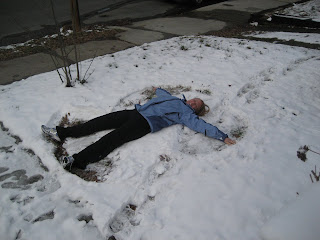 Except if I'm attempting to ski in it. Then it can snow, snow, snow!

On Day 139, I made a snow angel as the thing I've never done before. I'm sure that had I had an opportunity earlier in life to make a snow angel, I would have. I certainly wasn't nervous about it and I knew what to do. This was the only time in my life that I can think of when there has been enough snow on the ground to actually make it happen.

My friend Maribeth and I braved the cold and went running through Candler Park before I asked if I could make the snow angel in her front yard. I assumed that she'd say, "Sure!" but she actually had to think about it and how my disrupting the snow might affect her neighbors' dog, who had taken a liking to the snow.

Maribeth told me to hold my hands out to my side and just fall straight backwards into the snow. But that had "concussion" and "bad idea" written all over it. Is that really how a snow angel is made? There was a lot of snow, but I'm not sure there was enough to just fall into it. So, I took the wimpy lame route and just laid down before I "snow angeled."

Like wearing my hair in ponytails, there is something childlike and innocent about making a snow angel. A moment I savored for a brief minute until Maribeth, taking pictures of me, shouted, "Hurry up. It's cold and I have to get ready."

Check out my handy work here: 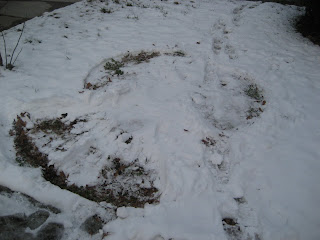 Posted by Stephanie Gallman at 12:10 AM