"But in a box beneath my bed is a letter that you never read..." -Taylor Swift

Echoing the sentiments of country crooner Taylor Swift, and several friends who have written such letters, on Day 151 I wrote a letter that I'll never send as the thing I have never done before.

I didn’t plan on becoming a living, breathing country song, and trust me when I tell you 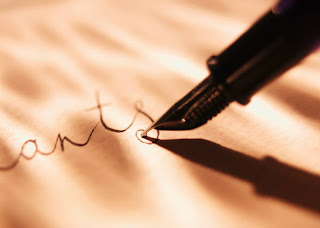 quoting Taylor Swift on this blog hurts me more than it hurts you. But when I found myself watching John Mayer's Storytellers on You Tube at 1am, crying the tears of 2010’s suckiness, I knew the time had come to take serious action. Time to get the thoughts causing me so much anxiety out of my head and onto paper.

I am actually surprised that I hadn’t ever written a letter like this, seeing as how I enjoy expressing myself through writing. I like to express myself, period. If something's on my mind, I talk about it. And if I’ve ever taken the time to craft an emotional letter or email before, I’ve seen it through, sending it to its intended recipient.

I have no problem communicating. In fact, many forced to endure seemingly endless rants about my feelings might call me an "over-communicator.”

But for whatever reason, this particular circumstance was different, and for the first time ever, my desire to keep my feelings to myself far outweighed my desire to share them with anyone. Perhaps I’m turning into the aloof, mysterious person I always wanted to be? Nah, unfortunately not, because I knew I’d eventually have to share it with all of you.

Only I don’t have to tell you what the letter said, and I won’t, because I’ve already shared far more about this experience than I wanted to. But having forced myself to participate in this activity that so many others have already participated in, I can tell you there is a reason why writing a letter like this sparked a song lyric. All the hype is true. Writing the letter helped.

Putting it out on paper was, not surprisingly, emotional, even though I knew the only person who would ever see it was me. But it was cathartic too.

And I had to laugh, that despite being sad about having to write my feelings down, a moment came when I couldn’t help but wonder, and sort of hope, in a sick a twisted little way, if anyone had every written a letter to me but never sent it.

Self-centered and ridiculous, I know.

Days later, I shared with my friends what Thursday's blog activity was. I knew some of them had written similar letters and I was hoping for a vote of confidence that this was a healthy, sane thing to do.
Maribeth nodded in understanding, "Oh yeah, I've written several letters like that."
"Really?"
"Yeah, and then you put the letter away, find it three years later, and cry all over again."
Wow. I'm so glad I decided to participate in this exercise. Sike.

So is the letter about letting all these feelings go? Or just a way to perpetuate the sadness and revisit it for years to come? Why doesn’t Taylor Swift write the letter and then burn it, or tear it up and throw it away?

Or, as Maribeth suggested to me, “Why don’t you just send it?"
Because I was, I am, fighting the urge to over-communicate. And though there are many things that I still haven't said, questions I haven't asked, I had a feeling that the letter wouldn't solicit the response that I was looking for. There is a huge chance it wouldn't solicit a response at all.
So the letter was more for me. An opportunity to put my thoughts on paper and get them out of my head. So that I can move on. And, fingers crossed, like Maribeth, I can revisit this disappointment in the future.

This is fun. I’m glad I did this. Really.
Posted by Stephanie Gallman at 1:18 PM