My friend Maribeth called me on Sunday to see if I wanted to ride bikes through Candler Park and though it was difficult to pull myself off of the couch, I agreed.

We ended up riding our bikes for a while. So long, in fact, that we felt we had earned a pizza dinner break at Fellini's, which is down the street from Maribeth's house. I like to end all periods of strenous exercise with food, usually undoing any good that the exercise might've done. But I really put forth an extra effort when I know there is a reward at the end. 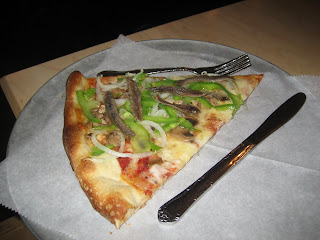 The bike ride with Maribeth through Candler Park could've been the thing that I've never done before. But that felt a little lame, so I had to make something new happen at the pizza place.

A new topping, perhaps?
Anchovies?
Indeed.
Day 147's thing I've never done before was to each an anchovy.

I asked the guy behind the counter about anchovies, and how to order them. I told him I was a first-time anchovy eater and needed some guidance. Do regular anchovy eaters just get anchovies, or do they get them in addition to other toppings?

He was a little bit taken aback by my questioning. I didn't mean to put him on the spot, but based on his reaction, I think he thought I was cornering him.

"Do you like them?," I asked, trying to keep things light.
"Me?" he said, "No, not really. They're way too salty for my taste."
He went on to tell me that most people who order anchovies on their pizza do so with other toppings. So I added anchovies to what I usually get: onions, mushrooms and peppers.
When they brought the slice of pizza, I was horrified by the way the anchovies looked. They resembled slugs lying on a perfectly normal, appetizing piece of vegetarian pizza. And they stunk. Like fish. 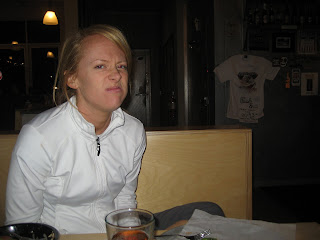 If it's true that a food's appearance and smell affects how it tastes, I should've thrown up immediately. But I did not. I held it together.
Maribeth and I sort of stared at the piece of pizza. I think she was torn on how to feel. Sorry for me that I decided to tackle this challenge, but happy she didn't have to eat them.
"Are you challenging yourself to eat anchovies or something?," one of the employees asked me.
Well, yes. I mean, no. I guess, kinda? I had to tell them about the blog, and they seemed intrigued. I wrote down the blog's website address and gave it to them to check out. Shameless.
With no one else to pimp the blog to, I had to go ahead and do what I came to do. I cut a piece and ate it. The guy behind the counter was right when he said anchovies are salty. The fish/salt sort of dissolved in my mouth and not in a good way.
I tried to give it a chance, to stretch my culinary tastes, but the flavor was just so strange. 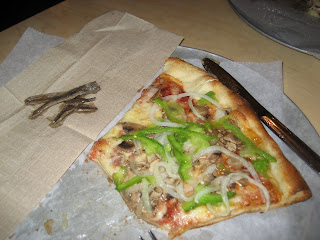 Maribeth asked me how it was, but the evidence was all over my face. Curiosity was getting the best of her and she wanted to try the fish too.
"It's not that bad, it's just salty," I said as Maribeth took a bite of one of the anchovies.
She looked horrified, "It's that bad."
I made a concerted effort to at least finish one anchovy, and I did. But it was a challenge. And I eventually took them off and put them to the side. But the smell was still permeating, so eventually I wrapped them in paper towels and threw them away. I tried, I failed to like anchovies, except when they are mashed up in Caesar salad dressing.
Pizza should not be ruined by salty, gross fish.
Posted by Stephanie Gallman at 3:00 PM