On Day 143, I returned to Mansfield, Ohio (where Shawshank Redemption was filmed, and where Luke Perry was born, remember?) for a work assignment. The trip was a short one, making Day 143’s thing I’ve never done before to fly in and out of the same city on the same day. 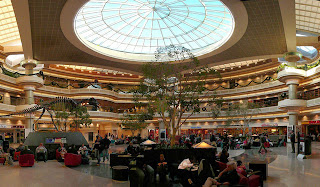 I was excited about this prospect, because despite not loving to fly, I really love airports. The fast pace, the people, the convergence of business and pleasure.

And for some reason, traveling for work validates me in my job. The fact that they pay me every two weeks and gave me business cards should be enough. But when they asked me to go out of town (even to Mansfield, Ohio), by myself and on their dime to represent the company, I'd be lying if I said I wasn't flattered. Terrified that I would find a way to screw it up, but still honored.

I've lived on my own for ten years and had a big-girl job for seven, but there is still a part of me that feels like I'm a kid playing dress up.

I drove to the airport early Wednesday morning. So early, in fact, it was still dark out. Since I only had a laptop and a purse, I loved the ease of checking in and going through security without any bags to check.

Most people flying that early in the morning were doing what I was doing, and clearly headed out of town on business. I liked thinking about the huge career moves some of them might be making that day, or the big deals they would be closing.

Once I landed, my snowy day in Mansfield was busy. I drove from one end of the town to the other, amazed at how many people I could meet and how much I was able to accomplish in one day, yet still wishing there were more hours in the day to get more done.

I barely made it back to Columbus in time to fly out, and I had resolved that I was going to miss my flight. But thanks to a delay and no lines at security, I made it and got back to Atlanta.

The whole day was very Up in the Air, except for mine lasted one long day. And there was no cocktail hour in the crown room. No love affair. No George Clooney.
Posted by Stephanie Gallman at 3:29 PM