Jackie, my colleague who bravely tackled kickboxing with me back on Day 56, walked over to my desk back in February and I could tell she had a little plan up her sleeve. She was on her way down to the company athletic club and asked me to come along.

I had been seeing advertisements for Fit Trip all over the gym she and I belong to, but hadn't thought to ask anyone about it. Jackie explained that it's a 12-week fitness challenge designed to help individuals reach their health goals while winning prizes.

The $1000 travel voucher was enough to perk my interest to get involved. The idea of possibly beating my overachieving, but rarely modest co-workers in a fitness competition was also a huge plus. Plus, Jackie explained, they start the program by checking your body fat in a tub full of water.

Forget the competition, this had blog opportunity written all over it. Day 142's thing I've never done before was to have my body composition tested by hydrostatic weighing.

I had my body fat checked years before as a teenager using what I call the "pinch method," where the checker pinches and measures skinfolds on several spots on your body (stomach, arms, back). It’s demeaning. And depressing. The hydrostatic weighing can also be depressing and demeaning, but there's no pinching involved, and according to the trainers at the club, it's the most reliable body composition test out there.

When I arrived on the day of the big weigh-in, I met one of the organizers, and my fitness consultant, Jen K. She informed me that the testing truck, where the weighing would take place, was parked outside of our office building. She told me I should take a towel and run out there.

Sure enough, when I headed outdoors, I saw, parked right in front of the building's largest thoroughfare, a truck, with a trailer behind it labeled in big letters, "BODY FAT TEST."

Just in case running into what is the equivalent of a mobile home on the side of the road in front of my office building and running out ten minutes later completely drenched isn't awkward enough, I'm so glad that they labeled the hut for what it is: BODY FAT TEST.

I should've shouted before I went inside, "IF ANYONE NEEDS ME, I'M HEADED INTO THIS 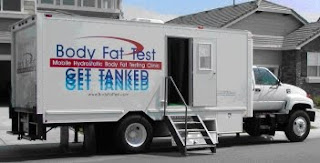 CREEPY TRAILER TO GET MY BODY FAT TESTED. JUST IN CASE."

I went inside and was greeted by the test facilitator. I saw the tub of water in the upper left corner, and two dressing rooms to the right. The room was warm and smelled like a public pool. A guy who had just had his own body fat checked had just emerged from one of the dressing areas and was getting his results by a desk located immediately left of the door.

I went into the dressing room to get ready to weigh-in. And by that, I mean, strip down to my bathing suit. I don't care who you are or how good you look, getting into a bathing suit in the middle of February sucks. (Sorry, Mom) I mean it really sucks. I felt disgusted before we even started and I didn't even know what my numbers were.

I climbed into the tub like he told me to and was immediately pleased at the water temperature. Atlanta was, at that time, still experiencing chilly temperatures, so the warm water was a nice change. If he'd let me, I could've swam in the fat check tub all day. But he was all business, and when I commented about how nice the water felt, he sort of nodded his head and then quickly told me what I needed to do.

He instructed me to get into a push-up position with my head above the water, and then he placed a weighted belt on the small of my back. He said that when he told me to, I was to take a deep breath and then, while staying in the push-up position, submerge myself, letting all of the air out under water. When he was done getting the information he needed, he would knock on the side of the tub three times indicating that I could come back up.

Seems easy enough, but anytime I'm doing something that I've never done before, the simplest of instructions are always the hardest. 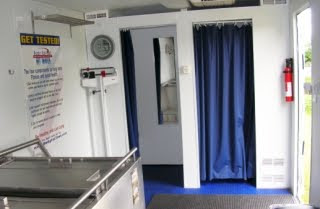 Not till you're under water.

When I knock three times.

"And I need to stay in the push-up position?"

This guy probably thought I was the biggest idiot.

Regardless, I followed his instructions, only getting mildly freaked out one of the three times we did this little exercise that he was leaving me underwater for too long. I almost had to come up with or without his three knocks on the side of the tub. But he got the data that he needed.

He got it quickly, as a matter of fact. While I was drying off, he just blurted it out.

"WHAT?!" I felt outraged immediately, though I really had no idea what that number meant or if I was healthy. Anytime I'm at a doctor's office and they weigh me, or check my blood pressure, I always like to act surprised by what they tell me. I don't know why.

"Is that good?," I wondered to myself.

And then, as if he could read my mind, he said, "That's actually pretty good for someone your age."

My age? What do you mean, my age? I hated this guy. And I fear this may have been the first of what I suspect will be years of me being sensitive about my age.

To think that twenty percent of my body composition is fat is weird though, I won't lie. 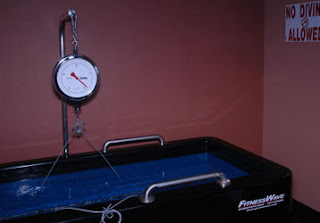 Probably because I really wanted him to say, "Wow! You're like a fitness anomaly and despite having slacked off on working out, you have absolutely NO body fat. Amazing!"

He then went on to inform me that if I lost some of my body fat, I could actually shave time off my racing time, as if this was some groundbreaking information. Thanks, Captain Obvious, for pointing out that people with less body fat weighing them down actually run faster?! Certainly something to consider, though, and I nodded at him as if he just cracked some mystery code. Look out Kenyans, I'm coming for ya!

When I was a teenager, and borderline psycho about eating and working out, the pinch method told me I was 16 percent body fat, a number that completely devastated me in an unhealthy way. At that time, I was dancing for three hours, five days a week, and eating very little. All I did was think about how I looked. Now I'm 29, I have a full-time job, I enjoy my life and I'm not nearly as bent out of shape about being in shape as I was then. So, I considered, if four percent more of my body is fat than it was when I was 16 and I feel so much better about who I am and how I look now, then I'll take it!

Still, in the spirit of competition and the purpose of the Fit Trip program, I did set some personal fitness goals to lose about five pounds over the course of the 12 weeks and therefore shed my body fat by three percentage points. To be honest (and don't tell my consultant Jen), I don't know if it's going to be possible for me to meet this goal, as this blog is sort of my big goal, and I don't know if I can achieve two goals at the same time. But I will try. I am trying.

If I stand any chance at all, I'm going to have to rely on the blog to be a part of it. New exercise classes, perhaps? Surf camp? Rock-climbing wall? They're all on the list and may have to happen in the next 12 weeks so I can get my body fat down in the teens.

Or at least just beat Jackie. We have our own one-on-one competition going on that includes smack-talking and sabotage. Jackie bakes delicious food and places it in my line of sight and I swing my gym bag in front of her face and ask her if she's worked out yet today.
Good, friendly, healthy competition.
Posted by Stephanie Gallman at 9:00 AM

Email ThisBlogThis!Share to TwitterShare to FacebookShare to Pinterest
Labels: Jackie