With a strong Louisiana contention in my office, and the Saints in the Super Bowl, King Cake consumption had reached an all-time high at the beginning of February. All of the King Cakes came from different places, but all were store bought. I wanted to make one of my own.

Day 135’s thing I’ve never done before was to make a King Cake from scratch.

This challenge was extra intimidating for two reasons:
1. Jackie is an excellent baker
2. She's from New Orleans

The potential to make this cake for her and have her think it was a huge disaster was high. She knows baking. She knows New Orleans.

Plus, she said she doesn’t even make King Cakes anymore, after attempting them a couple of times.

When I emailed her to tell her I was attempting to make one in her honor, she replied, “OMG. I’m going to cry I've done it twice... so my hats off to you. I used an Emeril recipe that is NOT good.”

Interesting, I thought, that she mentioned the Emeril recipe because I had looked that one up and passed on it for having too much lemon and other weird ingredients. Emeril is from New Orleans too, so I assumed he would know how to do a King Cake well, but this recipe did not sound good. I chose a Southern Living’s version instead.
The ingredients were simple enough: flour, eggs, sugar, cinnamon, butter. Everything is mixed 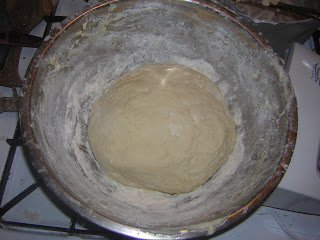 together to make a dough. I didn’t think about it until I was actually doing it, but this was the first time I’d ever made, and kneaded, dough. What a mess! My kitchen and I were both covered in flour. It was fun, though.

After the dough seemed doughy enough, the recipe called for me to cover it, put it into a warm (85 degrees) place away from any drafts.

Since my landlords like to keep my part of the house no warmer than 60 degrees, finding a place without a draft that was 85 degrees was nearly impossible. For the first round of resting/rising, I put the ball of dough in my oven. I'm sure the oven (which was turned off) wasn't 85 degrees, but at least the dough would be safe from the draft. After waiting the hour the recipe called for, the dough was supposed to rise to double in size. It definitely got bigger, but I'm not at all sure it was twice its original size.
So the next "rising period," after I rolled the dough out, filled it with butter and sugar and cinnamon, and formed it into an oval, I ended up putting the dough on a cookie sheet and placed it directly in front of the space heater in my living room. It was beyond redneck, but it worked. I think it worked. I mean, it definitely grew, but since I had nothing to compare it to, I have no idea what it was supposed to look like.

I baked it for the appropriate time, brought it out and it was less of a ring that I think it’s supposed to be, and more of a mound with a hole in the center. I frosted it and covered it with the yellow, green, and purple sugar that I had dyed. It looked glorious. 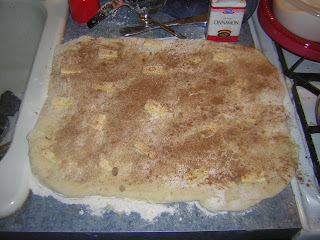 Making a King Cake is a lot like making fruit cake in that it involves a great deal of effort, and a great deal of time and tedious labor. But saying I made a King Cake did not garner the same negative reaction that saying I made a fruit cake did. And while I think both tasted good, if I had to choose one to eat for the rest of my life, I'd definitely choose the King Cake. The true test on taste, though, was Jackie, and all my native New Orleanian friends. Someone had brought in a premade King Cake that people had been eating all day. I was irritated by this because I wasn't sure how mine would stack up against the store bought version and I didn't know if anyone would still want to eat my King Cake. Mature, I know.

Jackie, who had been wearing Saints outfits for two weeks, was touched from the moment I emailed her and told her that I was making it. She got the first piece, which was still warm from having come out of my oven less than an hour before.

Her eyes widened and she said it was the best King Cake she'd ever had.

I know everyone measures success differently, but I think I can call that a universal success. Or maybe she was just being nice. I had to follow up with another New Orleanian, Belinda. She had just returned from New Orleans where she watched the Super Bowl with her hometown crew. Her voice was still hoarse.

She also agreed with Jackie that it was the best King Cake she'd ever had.

I texted my friend Tray a picture of the King Cake before it was devoured by my colleagues. He's also from New Orleans and had just returned from the Super Bowl in Miami.

He called me later to ask about the cake.

"What did you use for the baby?" he asked me. There is usually a plastic baby hidden in the King 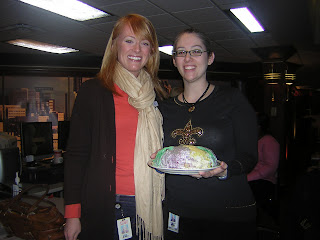 Cake and the tradition is, whoever gets the baby in their piece of cake has to buy the next year's cake.

This question had come up earlier when I confessed to Jackie that I didn't have plastic babies just lying around my house, nor did I have any idea where to purchase such a toy. She said I could’ve come to her house because having a toddler means having small plastic toys. Lots of them.

I considered taking some random trinket from my house, sterilizing it and making it the "baby." But a Washington, DC key chain just didn't feel very New Orleansy. So I did some reading about the King Cake on cooking websites and they said a bean, or an almond, were appropriate substitutes. I used an almond.

Tray disagreed with this decision. When I told him I didn't have a plastic baby to put into the cake and that I used an almond instead, he was not pleased.

"Don't tell people that. Don't say you used an almond," he said. He was serious. When it comes to King Cakes, or anything New Orleans, Tray does not mess around.

He asked me if I knew the history behind the King Cake and Mardi Gras, which I did not. He gave me a quick overview on the phone, but proceeded to, after we hung up, send me multiple text messages delving further into it. Sending a history lesson via text message is difficult, I imagine. I applauded his efforts.

I spent so much damn time dyeing sugar for the top of the cake, so I do remember what he told me about the significance of the colors. Purple represents justice, green represents faith, and gold represents power. 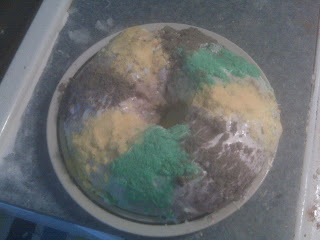 I confess I don't remember much else about what he said, so I've since gone back and read about the history of Mardi Gras. For Tray’s sake, please go learn about the King Cake and Mardi Gras here.
I left one of the cakes at home because it hadn't cooled yet, and I couldn't put icing on it. I promised I'd bring it in the next day, and then I forgot, causing literal outrage from my co-workers. Sara was like a King Cake addict looking to get her fix.
"What?! I didn't eat lunch today because I thought you bringing the other cake!!” she said, crazily.
I was taken aback. My feelings were mixed, as I felt badly to have disappointed so many people, but also awesome that everyone loved the cake this much.
I brought in the second cake the next day, but it wasn't as good the second time around. I take the blame for that, because I should've covered it to keep it fresh, but I just left it in my oven, where it had been cooling.
Still, I count the King Cake an overall success, one that I know I can only take partial credit for since all I did was follow instructions. I’m in love with this recipe.
Who Dat?
Posted by Stephanie Gallman at 3:00 PM