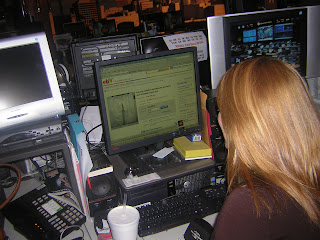 I couldn't help but think of the time when my mom tried to buy a porch swing for my brother's house on eBay during Christmas time. After having a difficult time finding a porch swing in stores during the winter, she went to eBay at a friend's recommendation. I think she thought the site was just a flea market full of random things for sale, so she didn't bother bidding on the swing she wanted. Instead, she contacted the buyer directly asking if she could just buy the porch swing. Her disregard for the rules brought out the eBay police and she was contacted with some firm language on how eBay works.
She ended up buying the porch swing elsewhere.
Thanks to many people that I know who have been scoring deals on eBay for years, I knew exactly how eBay worked. For the most part anyway.
I knew that items go up for auction and buyers/bidders make bids, driving the price up, or keeping it down. When the time runs out, the highest bid wins. Easy enough, right?
The good thing about buying ski pants on eBay is that I had the potential for getting them at a discount. I don't necessarily always buy things on sale, but since I don't ski that much, I felt it more appropriate to either borrow ski pants or get them on sale. The bad thing is that I don't know anything about ski pants or what I should be looking for when purchasing them, so going to a store and seeking the advice of a professional probably would've done me some good.
So I did what I always do in situations like this and I went for what looked good. When in doubt, ignore the utility of the pants, and go for style. Because for me, skiing is as much about looking good doing it as it is actually doing it.
The first pants that I wanted were white. My ski jacket is blue. I liked the color combination potential. At the suggestion of Mo and Justin, who had really wanted me to make an illegal offshore bet as this day's thing I'd never done before, I needed to wait until 20 seconds before the auction was ending before placing my own offer.
I put my offer in and was sure that the pants were mine. Only I hadn't set up a PayPal account, so time ran out and I lost my first eBay auction. For something I was so unsure of, I was completely devastated that I did not win the opportunity to buy the white pants. 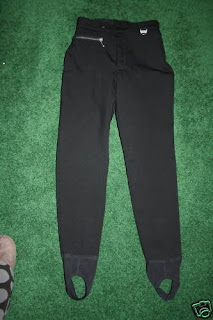 I was surprised by my reaction. eBay for me is less about the actual item, and more about winning it seems. Perhaps I'm more competitive than I thought.
There was no time for sulking, though, there were more pants to buy. I scoured through pages of pants, finding another pair, these black ones with stirrups made by Nils (which meant nothing to me, so I Googled and turned out they are a legit skiwear company for women). There were only a few bids and the auction was set to end in a couple of hours.
I returned to eBay and the price was still low on the pants. I was feeling pretty good about my chances. With 20 seconds to go, I followed Mo's advice and put my bid in for $22.50. And I won! I won the auction, not the pants. I still had to buy those.
With shipping costs, the price totaled $30. I emailed Justin and Mo a picture and told them my bid had been accepted on the pants, and no, unfortunately, the green carpet was not included. Too bad.

The pants arrived 3-4 days after I bought them, just like the eBay email said they would. And they looked exactly like they did in the picture. They are super tight, but I think they're supposed to be. I'm definitely going to look less 2010 U.S. Olympic team, more 1990 cast of Ski Patrol when I'm in Tahoe.
But they were only 30 bucks and I got them on eBay so I really don't care.
Posted by Stephanie Gallman at 9:00 AM