Yes, like a music group making multiple city stops, my friend Momo and I call our yearly treks from showers to bachelorette parties to engagement parties, "Wedding Tour."

Next stop on the 2010 tour: Amanda and Stephen. 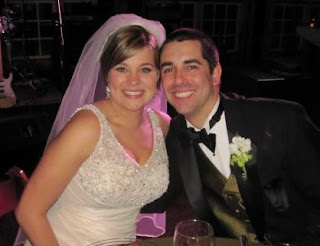 After having attended, crashed or been in 60+ weddings over the years, what could their wedding possibly offer me that is something that I've never done before?

Day 146's thing I've never done before was to attend a wedding of a co-worker. Two co-workers, in this case.

I suppose a wedding is a wedding, regardless of who is getting married, and this isn't terribly monumental in any way. And it's not.

But when I think about Stephen and Amanda starting their relationship that eventually led to their marriage, I think it's pretty cool that I knew them both, separately, when they started dating.

I remember their relationship, like most office romances, was veiled in secrecy when it first began. Not in a weird, "we're ashamed of ourselves" kind of way, more of a, "trying to maintain some level of professionalism at the office" kind of way. When I found out they were dating, I did so after stalking facebook photos of the two of them together wondering what was going on. I confirmed their relationship from another colleague who told me in confidence like the news was insider information.

I can't blame them for wanting to keep their budding romance a secret, as when I think about office romances, I always think of them creating awkward scenarios for all parties involved. The phrase, "Don't shit where you eat," comes to mind. Not a classy, or pleasant thought, I know. But sadly, when I think of relationships in the workplace, I think not of the grand possibility of it working out like it has for Stephen and Amanda, I think instead of the bitter end. 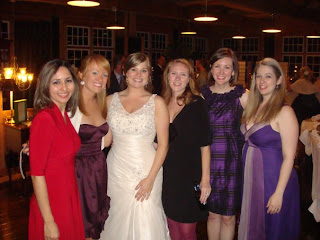 Plus, despite working with a lot of great dateable people, I like to keep my work life and my outside work life, separate. I think it's just the whole world's colliding thing. When my personal life is a disaster, I seek refuge at work with my co-workers. The merging of the two could have dire consequences.

I don't have any hard and fast rules about not dating someone that I work with. I mean I spend a lot of time at work, so the potential to meet someone there is certainly high. So far it hasn't really come up, but I'd consider all workplace dating on a case by case basis and I would tread cautiously if the opportunity ever presented itself.

After all, Amanda and Stephen have proven that finding love at work can really pay off. According to Amanda, they've never really had a fight. I find this fact both adorable and annoying all at the same time.

They ride to work together everyday, which is also adorable and annoying, but environmentally friendly too. I have to think their union is cost effective for the company as far as health insurance, though I'm not sure how. And they take their dinner breaks at the same time, which is great for them, but doesn't really affect any of us or the environment that I can tell.

So maybe love in the workplace is a good thing?

And Amanda and Stephen's love affair became an opportunity for all of my seemingly useless Atlanta wedding knowledge to become not-so-useless.

Amanda sought my advice on a wedding venue almost immediately, as I am now a professional wedding participant and attender. In fact, having just gone to a wedding at Roswell's Ivy Hall, I suggested it as a location for her nuptials and after she checked it out, she booked it.

The next months included decisions about the food, the cake, a band, her hairstyle. Obviously she made all of the decisions on them, but I felt honored to have been included in the discussion, which was often just an affirmation of what she had already decided. 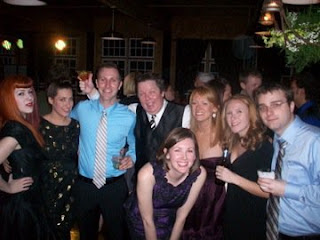 Even as a bridesmaid in other weddings, I had never been involved in so many of the decisions surrounding a wedding ceremony as I was with this one.

I even offered to get ordained so that I could perform their wedding ceremony, an idea that Amanda miraculously considered for a hot second, but then decided against. She said she would've laughed the whole time if it was me up there, asking them to recite their vows. But as I told Amanda, I know I'm a little ridiculous and silly sometimes, a wedding is serious business and I wouldn't have made it into a joke. So if anyone out there is in need of an officiant, I'm happy to do the work required to marry you. I'm serious. Think about it.

My involvement, or at least my firsthand knowledge of all of Amanda and Stephen's wedding plans made me wonder about all of the weddings that I've been in over the years. Several of them I knew nothing about prior to showing up in my bridesmaid's dress to walk down the aisle. For this, I'd like to apologize to all of those brides who I've let down over the years. I think I failed at my job as a bridesmaid, and I'm sorry that your co-workers, who may or may not have even been invited to the wedding, likely had to do all of the work that I should've done.

When the day finally arrived, I rode up to the wedding with Emily and we met some of our group at a nearby bar beforehand, which was completely unnecessary. I'm often accused of being anti-social when it comes to outside of work gatherings, though, so I didn't want to not participate.

When we arrived at the wedding, which was beautiful, I looked around at all of us, our big dysfunctional workplace family all dressed up, and I couldn't help but laugh.

I laughed a lot during the ceremony, in fact, which is what I do when moments get serious and laughing is inappropriate (not really making a strong case to become an officiant, but I am who I am). I'm sure those sitting around me who were able to keep their composure during a 15 minute ceremony were thinking to themselves, "Who's this jerk?"

The same question was probably asked again when two of our colleagues came in late and were forced to loudly shuffle across the wooden floor, sounding like two elephants trying to find a seat in church. 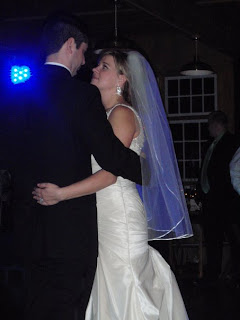 And once more when we started stuffing gummy bears from the candy bar into clear liquor drinks, and then spilling them on the floor (for the record that wasn't me, but I was guilty by association).

I imagine the questions, "Who is that?," "What are they doing?," "Why are they acting like that?" was asked by Amanda and Stephen's friends and family several times throughout the night.

Just like every other wedding I go to lately, someone, this time another colleague, tried to set me up with the only other single person at the party. Not because we have anything in common, but because we're both unattached.

As far as the actual nuptials go, this wedding was just like all of the others I've attended. All of my friends acting like jackasses, and a lot of people asking me why I'm not married. Par for the course.

I truly was honored to have been around when this romance started, to have been included in the wedding planning, and most of all, to watch Amanda and Stephen begin their lives together as a married couple.

Yea for them making a workplace romance work. Congratulations you crazy kids!
Posted by Stephanie Gallman at 5:23 AM