Traveling to and from Mansfield in one day (Wednesday) meant that I was back to work on Thursday just like any other day.

My plan to get ordained online so that I could fill in at a co-worker's wedding fell through because, unbeknownst to me, getting ordained to perform weddings is not a one-day task. In fact, it takes several weeks to achieve.
My backup plan, Day 144's thing I've never done before, was to go to the Drinkshop at the W 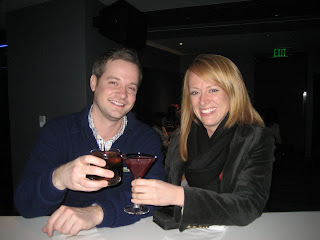 Downtown with my friend John.
Because he is a drummer himself, John always knows about music playing in Atlanta. He usually knows the performers as well, and this night was no exception. A friend of his, John Pringle was playing at the bar and another band, Georgia, was the opening act.
Both John (Pringle, not my friend) and this band reminded me of acoustic groups I used to see play at Allen's in Athens, Georgia back then I was in school there. Plaid shirts, shaggy hair, scruffy beards. Everything I like in a musician, really.
Only in this completely modern, upscale fancy bar I felt a little strange. The crowd was young and hip. But listening to their music made me feel like I should be kicking through peanut shells on a sticky bar floor, instead of watching a bartender shave through an ice sculpture lit up from underneath. I shouldn't be drinking cocktails. I should be drinking draft beer.
I went for the fancy cocktail, at least at first, ordering the "El Diablo" because it had tequila in it. And I like tequila. El Diablo also had Ginger Club Soda and Black Currant in it. It was terribly overpriced ($13) and just okay.
The night was more than okay, though. We moved the party from the W to Star Bar in Little 5 Points and saw several more bands play, including Ponderosa, a band my friend Courtney has been telling me about for at least a year. Not too shabby for a school night.
Posted by Stephanie Gallman at 1:40 PM

Email ThisBlogThis!Share to TwitterShare to FacebookShare to Pinterest
Labels: John