Day 138's thing I've never done before was to see a singing quartet in person.

This was one of those unexpected blog experiences that was not planned and just sort of happened to me.
Well, not to me thankfully, or I might've had a 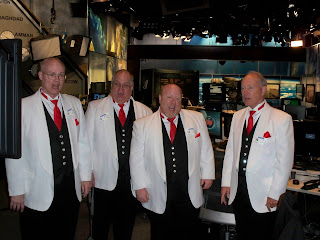 heart attack.
So when I saw the quartet enter my office, I jumped up from my seat and ran from my desk to the back of the room. Not hidden, but just out of the action.
This is really self-centered, but when I spotted them, I thought for a split second that the quartet might be coming to sing to me. With the blog and just the general rapport I have with my colleagues, I have opened myself up for such antics and I wouldn't have put it past any of them to hire these guys to sing me a tune.

Public singing embarrasses me. Maybe it's not the singing, because I love live music and going to see bands play. I think I'm more embarassed about the outward expression of feelings between two people (or in this case five: the quartet and the person they are singing to).

Proposals at sporting events stress me out. Not because I fear the woman is going to say no, but the vulnerability of the dude taking a knee in such a public forum and everyone waiting for the woman's reaction. I have to turn away.

Can we talk about Tenley on the Bachelor and her little lyrical dance for loser Jake? Yikes. I changed the channel right after she started and didn't turn it back until it was over. I couldn't put myself through it.

Shocking because while I'll embarrass myself daily, write and talk about my antics to anyone who will listen, when I think about someone serenading me or professing their feelings for me me in a public way, I freak. Category 5 anxiety.
This guy I went out with briefly in high school was the place kicker on his school's football team. I went to one of his games and when he successfully kicked the extra point after his team scored a touchdown he ran off the field and pointed at me as if to say, "That was for you, Steph! That point was for you!"
Not the game-winning field goal. Not a $1 million contest winning kick. An extra point.
I wanted to sink into the bleachers and die. The aftermath of the "kick" still haunts me and I suspect those who were in my life then who read this blog are all enjoying the memory.
I did not then, and I do not now, do well with public displays of affection. At least not ones on such a grand scale.
And then I had karma working against to me after my stunt with Lisa on Day 136. My guard was up.
Luckily I didn't need to run for safety like I did. They weren't coming for me at all. They were actually coming for one of my bosses, who handled it a lot better than I would have.
I was able to enjoy their little ditties from afar and wonder how these four guys got together and decided to form this group.
Did one guy say to the others over beers, "Hey, you know what we should do? Let's form a Barber shop quartet!"
Was such a suggestion met with reluctance, or overwhelming support and excitement to jump on board. Did someone say, "Are you crazy?" or "Hell yeah we should!"
Regardless, they were a lot of fun, and entertaining, and they weren't singing to me. Hooray!
$50 says Lisa is on the phone right now ordering me a singing telegram.
Posted by Stephanie Gallman at 3:00 PM