In 1970 President Richard Nixon proclaimed the last Friday in April as National Arbor Day, a day to encourage tree-planting and care. The day had long been celebrated, thanks to J. Sterling Morton, a journalist and nature lover, who named the tree-planting day in Nebraska "Arbor Day" back in 1872. Despite Nixon's formal declaration, several states celebrate Arbor Day on a day of their choosing, in order to coincide with the best tree planting weather. 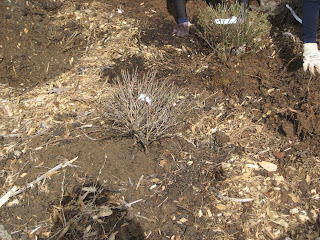 Georgia recognizes Arbor Day on the third Friday in February. So on Day 145, I made the thing I've never done before plant a tree for Arbor Day.
Well, actually it was a bush. An azalea bush.

Planting a tree to observe this special day is something I could've pulled off without any outside help. Just buy a tree and plant it, right? Only in planting the tree myself, I faced two very big hurdles:

1. Where to plant the tree (I don't own a home and therefore technically I don't have a yard. My landlords take excellent care of the yard in front of our place. If I told them I wanted to plant a tree in it, I'm confident they would have laughed in my face and before emphatically saying, "absolutely not.")

2. How to plant the tree (I know nothing about gardening. Nothing.)
Thankfully, one of the many great things about the company that I work for is that there are always volunteer opportunities to get involved with. When I saw there was an opportunity to plant trees at Grant Park, I signed up immediately.
When I arrived at the event, one of the park's employees gave us a history lesson about the park that is in my neighborhood and that I run through often. I listened intently, for a while, but soon lost interest in how many times the land had changed hands and how it was named. I had to leave the event early to go to work, so I was ready to get planting. 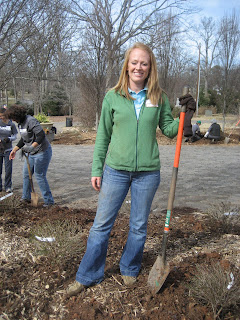 The project leader divided us into two teams, one "easy" team that would head to the top of the hill and get started on some azalea bush planting and one "harder" team that would go elsewhere and plant something else (can you tell I wasn't really paying that much attention). Good thing I was in the "easy" group.
Only nothing was really "easy" about completing the project. Thanks to the night before, I was moving at about a third of the speed that I would have normally. Walking up the hill to the flower bed was an effort of great magnitude. Plus, I didn't really know anyone else participating, so I was forced to carry a shovel, gloves, and the plant all by myself. There were lines of little kids at the park that day for field trips and I was sort of weaving in and out of them with my arms full.

Once we got to the top we wasted no time in cleaning out the beds and digging holes for the azaleas to go in. The project leader told us to make the holes for the plants about a foot deep and two feet wide.

I was surprised at how difficult the digging was. There were trees already planted in the bed, so in addition to fighting my fatigue and the compact soil, I was trying not to damage the trees' big, strong roots. 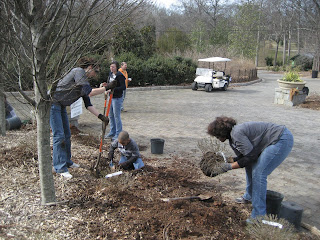 I was getting into a groove, when just like adult guy with braces in my cooking class on Day 21, someone decided that they wanted to be the leader of the group. "Yard of the Month" was dressed for a marathon, and he was ready to attack the planting project with everything that he had. I'm sure he was bummed he got lumped in with the "easy" group, so he took it upon himself to share with us all that he knew about gardening. He self-appointed himself our gardening guru and soon he was leading demonstrations on what we should be doing.

I listened to what he had to say, because I could tell he knew what he was talking about and I certainly don't know anything about gardening. But I avoided making eye contact with him. And when I had the opportunity to move to the other side of the sidewalk and start planting in another flower bed, I took it.

Yard of the Month was adamant that we needed to break up the roots of the plants before planting them, which is fine, and makes a lot of sense. But this guy took it upon himself to stand in front of the group holding up the plant with one hand and demonstrating, with great fervor, exactly how to do it. He spent a great deal of time on the roots. Too much time, in my opinion. I was ready to move on and plant the damn thing, so I stopped massaging the roots and asked the real project manager if my roots were adequately broken up enough for planting and he said, calmly, "yes."

So I went for it.

My favorite participant was one of my colleague's sons, Cameran. Cameran is an active 5-year old who was really interested and excited about the project, but unfortunately didn't have the physical strength the handle the heavy shovel and carry the azalea bushes.

Cameran loved the worms, though, and soon, the whole team was alerting him to any slimy creatures we found when we were digging through the soil. He was a cute, cool kid and I liked him immediately.

And then he said something that made me like him even more.

I stopped shoveling and laughed out loud. I don't think I'd seen or heard the words, "roly poly" in probably 20 years. It's a phrase that I just stopped saying after I decided that digging in the dirt was gross and no longer fun. I'm honestly not sure if what he was calling a "roly poly," was indeed that, but when he held up the gray little bug that rolls itself into a ball, I nodded and smiled. That's what we used to call them too. 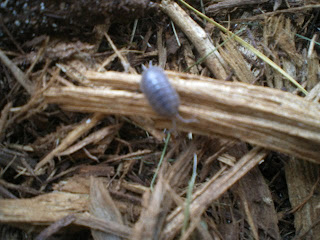 I should've asked Yard of the Month if what Cameran had found was, indeed, a "roly poly," but I was afraid he'd dive into an entomology lesson and I just couldn't deal with it.

I continued planting more azaleas until I looked down and realized I was covered in dirt and in sweat and that I had to be at work in half an hour. I don't know what idiot thinks she can breeze in, plant a couple of trees, and breeze out completely dirt free. Probably the same idiot that stays out too late on a school night at age 29.

Gardening is messy business, so I had to run home and change.

Not to mention, gardening is hard work. This project definitely helped me on my way to reduce my body fat percentage. I was working muscles I didn't even know I had. My back and arms were sore the next day.

More than one million trees were planted on the first Arbor Day in 1872 in Nebraska. Though I was responsible for just a few azalea bushes, I was happy to get out in the fresh air and observe Georgia's Arbor Day in 2010.

And though I'm mildly concerned that my incomplete root breakup might mean that my plants won't flourish, I'm excited to go back to check on them.

Posted by Stephanie Gallman at 4:50 PM