Before I decided to go to the University of Georgia, there was one major hang-up I had to contend with before leaving Columbia, South Carolina for Athens. It wasn't that most of my friends from high school were headed to schools in South Carolina or that UGA was three and a half hours away from home. It wasn't even that I had grown up cheering for the South Carolina Gamecocks and would now have to cheer for the Bulldogs. My concern: Georgia's colors are red and black. And this strawberry blonde doesn't, or didn't, wear red.

I like red just fine, just not on me. I managed the four and half years I was a student at UGA, and the years following graduation, to find ways around the red issue, by investing in red necklaces, earrings and shoes.

Maybe it was the red (and nasty) beets or the fact that we were heading into a Georgia home game weekend, but I had red on the brain. So I decided to step outside of my comfort zone and make the Day #6 thing I've never done before is wear red nail polish. 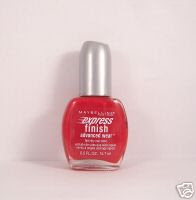 I didn't get long, strong, nice nails like my mother's. Mine are short and stubby and they tear when they get too long. And unlike Shelley, if I've ever been accused of having style, it is only because there was a lot of effort involved. So while I love getting manicures and pedicures, when it comes to color on my hands, I usually opt for colors with names like "Barely There" and "Whisper." The color I chose for this assignment: Racy Red.

Due to time constraints, I didn't get the red done professionally, adding to the anxiety of the project. I went to the store, picked out the color (who knew there were so many shades of red nail polish?) and painted it on myself. Half an hour later, and several "re-dos," it looked a little like an 8-year old did it. I managed to complete the task without ruining my clothes and furniture, however, which I count as a small victory.
It wasn't necessarily challenging to leave the house, but I would catch glimpses of my hands and be surprised to see so much color coming from them. I was the one that painted them, yet I would froget and get momentarily freaked out that my hand was bleeding or something.

Interesting point about this project is how I handle doing things that make me uncomfortable. I mean, we're talking about painted fingernails, here. No big deal to the average person, but I was so self-conscious about them! Red nails make a statement that I wasn't sure I was ready to make. I met a friend for breakfast with the red nails and before I even allowed her to notice or comment on them, I rambled something like, "Look at my nails, this is what I'm doing today as the thing I haven't done before, aren't they awful?" In my head I'm thinking, I'm gonna throw it out there and make fun of it before anyone else does.

My friend's response, "Oh, nice! l love them! I've been doing mine that color too."

Wait a minute...there seems to be a pattern forming here...could it be that all of these things that are a big deal for me aren't really a big deal to anyone else? 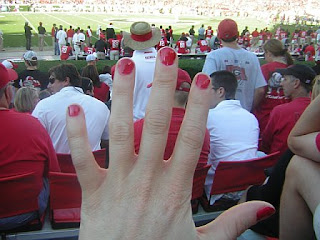 By day's end, few people had even noticed the nails. I had successfully channeled my inner-Shelley, though, managing to remain the cool, laid back person I'd always been while sporting super girly and loud red nails. It was fun. I'm not sure I like the maintenance required to keep up with painted nails, but I like the way they looked, and I plan on making this thing I've never done before something I do more often.

And unlike any of my other assignments so far on this project, I decided to let this one spill over into the following day. I left the nails red for the Georgia/LSU game, hoping they might serve as a good luck charm for me and the Dawgs.
As tomorrow's entry will prove, red nails are fun, but they were not good luck charms at all. Quite the opposite actually, and as I write this, my nails are polish-free.
Posted by Stephanie Gallman at 11:33 PM