I enjoy music the same way I enjoy sports: as a spectator. There's nothing better than watching my favorite team pull out a win with a last second touchdown, or watching a good band play an exciting show.

Friday night, my friend Lisa scored free tickets to see Kings of Leon at Phillips arena in a suite (which was also something I have never done before). On Saturday, I stopped by my friends' house in hopes that my favorite team could pull out a win on the road, and therefore help me to achieve a well-balanced, perfect weekend.

Kings of Leon held up their part of the bargain. Georgia's football team, however, for the second weekend in a row, did not. The game was embarrassing.

Towards the end of the game, we tried to busy ourselves with other things so we wouldn't have to watch the train wreck. My friend Lauren and I looked through all of my brother and sister-in-law's 1200+ wedding photos. She showed me her farm in Facebook's Farmville (whoa, this deserves more attention at another time, but what a bizarre new way for Facebookers to waste even more time). Eventually, Lauren's husband Donald, emerged with a guitar and strummed a few songs. He mentioned Scott, his neighbor and our friend, just bought a banjo. 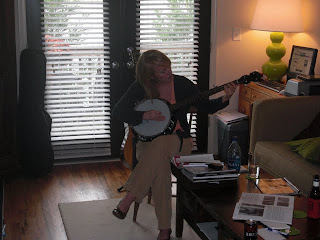 "Do you know how to play it?" I asked Donald.

"Yeah, I know a few songs," he replied, modestly.

"Can you teach me one? I've never played the banjo," I said, thinking this day was starting to turn around.
Nothing like a little pickin' and grinnin' after your football team gets slaughtered to pick you up and make you feel good. That's right, music fans, the Day #14 thing I've never done before is learn a song on the banjo.

Donald and I walked down to Scott's place to pick up the banjo, which he had kindly agreed to let us borrow for the afternoon. He also supplied us with an instruction book and finger picks, items that were appreciated, but obviously not needed for this ultra-beginner lesson. When we returned to Donald's, Lauren said sweetly, "I think I'm going to go take some Advil." 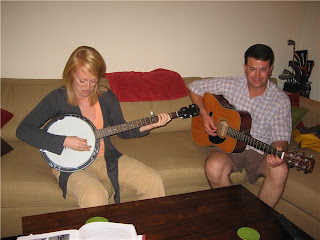 The song he decided to teach me was "Dueling Banjos," a song he has known how to play on the guitar and banjo for years. Suddenly my challenge became a challenge for Donald, who had to slow it way down and teach it to me note by note. Knowing how to do something yourself and teaching it to someone else are two completely different things.

What's funny about our lesson is that I don't know if the vocabulary he used to teach me this song is actually standard banjo-speak, or if it was just the easiest way to make me understand. If I ever take another lesson, is the way that he taught me the notes the same way everyone knows them? I honestly have no idea, but it's funny to think about, especially if it's not. I can't wait to pick up a banjo again in front of others and refer to the notes as open, 1, 3, open, 2 and have everyone look at me like I'm a complete idiot.

Not that I was terribly surprised, but playing the banjo is hard. Really hard. Thinking about moving my fingers to hold a string down and strumming at the same time is difficult enough, but actually making my fingers bend and stretch to do it is even more challenging. Within 30 minutes, my back hurt. Really? 29-years old and I can't play a banjo without back pain? Yikes!

Donald was a great teacher. He was very patient, even though I'm sure there were times he wanted to stick a knife in his eardrum. He even pulled up the scene from Deliverance to let me hear what the song was supposed to sound and look like. I was inspired!

When Donald (aka Teach) said I was ready, we invited Scott, his wife and my friend Emily, and her sister Amy, all down for my Saturday recital. The showed their support and clapped enthusiastically, proving once again, that friendship is a beautiful thing.
Alright, save the comments about my musical skills, or lack thereof. But if this is what I can learn in a couple of hours on a Saturday afternoon, think of what Donald's Banjo School can do for you!
Posted by Stephanie Gallman at 2:22 PM