Nina Sankovitch is a Connecticut woman who reading one book everyday for one year in hopes to inspire a love of reading in others. All of the books are ones she's never read, and she only reads one book per author. 365 books in one year?! I'm lucky if I finish one book in a month. Now I feel like a loser. I mean, she doesn't have a job outside of her home like I do, but she is raising four kids and she blogs about all the books she reads the day after she reads them. I'm impressed.

After hearing about Nina, a friend said that I should try and read a book in one day for the blog. Great idea, but unless children's books count, I may have to put this challenge off until I'm on vacation at a beach somewhere. I think I could do it, but I would have to completely remove myself from real-life distractions. 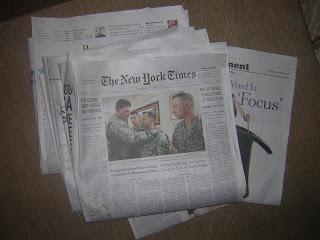 But I like challenges that force me to do things I should be doing more of anyway. Like exercising, doing kind things for others, or reading. So in honor of Nina reaching her goal, I decided to make Day #19's thing I haven't ever done before to read the New York Times cover to cover.

My first encounter with the New York Times with this project was back on Day #4 when I tried to complete the dreadful crossword puzzle. It was a beatdown and my pitiful performance still haunts me in my sleep. But I can definitely read, so really it was just be a matter of time to get this challenge done. As long as I was committed to the challenge, there was no way I could fail.

At least I thought so at first. I had a nice little rhythm going. I would make some work calls, and read an article. I'd send a few emails, and read another article. So what if I got mildly excited when I would turn the page and find a full page ad? It was a big issue on Thursday. I was making fantastic progress, though, and I was on my way to conquer the New York Times.

That is, until "Balloon Boy" happened. That's right, this 6-year old boy, that we now know is Falcon Heene, was believed to be floating through the Colorado skies in an experimental aircraft built by his parents. When news of this ordeal broke Thursday afternoon, I became glued to the television. Even worse than being captivated by the pictures, I was emotionally involved in this story, fearing for the safety of this little boy and feeling sorry for his parents. I'm such a sucker!

The whole "Balloon Boy" ordeal turned out to be a hoax, and just as the Larimer County police department is now blaming the Heene's for orchestrating an incident that created panic in their town, I blame the Heene's for distracting me from my goal of reading the entire New York Times.
Who can focus on where the health care debate stands in Congress when there is a Jiffy-pop looking vehicle floating through the air? Who?
I read many publications online, but it had been a while since I'd held a newspaper in my hands and flipped through its pages. There were stories I read that I don't know I would have even been able to find if I was reading the paper online. I feel smarter already. Did you know that the government has hired outside contractors to search for radioactive rabbit feces? And did you also know that 5400 public libraries in the United States are now offering downloadable books to their customers? And thanks to support from the community, Junior Silverio is going to keep his Greenlawn, New York video store!

And, get this-starting December 1st, any bloggers or Twitterers who write online product reviews must must disclose the receipt of free merchandise or payment for the items they write about. I guess I should mention that I have received NO free merchandise since starting my blog. But if anyone wants to give me pair of Jimmy Choos, I would be happy to make owning fabulous shoes one of the things I have never done before, and I will also be happy, Federal Trade Commission, to disclose that they were given to me for free.
You probably didn't know all of this information because you didn't read the New York Times on Thursday. But I did. Well, most of it anyway. By 11:34pm, I had looked at every section of the 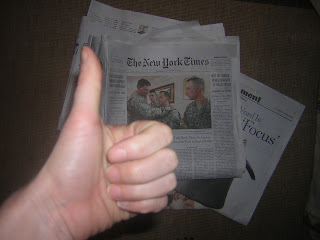 paper, but I did start skipping over some articles. I simply ran out of time.

I can't say I'll ever have enough time in the day to read the entire paper from start to finish (I mean, who knows when the next "Balloon Boy" is going to pop up), but maybe if I devoted a little more time to reading the paper and a little less time watching Keeping Up with the Kardashians, I'd probably be a lot better off.
If we're keeping score (and we're always keeping score, aren't we?), that's New York Times 2, Stephanie 0. But it's the moral victories that count, and I feel like I'm a winner.
Posted by Stephanie Gallman at 11:47 AM