Day 15: Changing My Life, One Concert at a Time

When I arrived at work Friday morning, before I even logged on to my computer, a friend of mine, who I'm now calling "Dream Killer," stopped by my desk and said, "I think you need some new ideas for your blog, Steph. Trying espresso? Not exactly life changing."

The words stung, I'm not gonna lie. I think I muttered something in response, but I was really so shocked, I really didn't know what to say.

Besides hurting my feelings, his comment made me think, am I selling myself short JUST painting my nails red, or JUST trying to complete a crossword puzzle? Are there bigger, more valid missions I should be trying to achieve with this project? Probably, yes. But even if I could think of 365, would I even be able to complete them and still keep my job? I just don't know how.

Truthfully, this blog feels like my second job sometimes. It's not easy. I'm already behind and it's just week #3.

But I never promised sky-diving type missions daily. Did I? If I did, I've misled everyone. I'm just doing things that are new to me. That's it. It was my year to say, "Why not?" when people ask me to try new things or do things that scare me.

If we want to get technical, up to this point the ONLY thing that I have done that has been life changing has been kissing a dude with a moustache, and that is the kind of change I'm trying to avoid in my life.

I suppose I felt the need to point that out because just like trying new foods, restaurants, sports, I plan on seeing musicians I've never seen before too. In honor of the previous day's music lesson, and subsequent less than stellar performance, it was time to see some professionals do what they do. 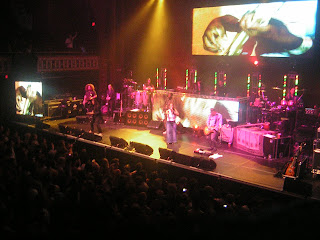 So, Day #15's thing I haven't ever done before: see Thievery Corporation, a band I know very little about, in concert. (Warning: it did NOT change my life)

There aren't any banjos in Thievery Corporation, but there was pretty much one of everything else, including a guy on the sitar, two guys on turntables, a sax player, a trumpet player, a bassist, and a whole slew of male and female singers. When they introduced the members of the band, it felt like a gathering of the United Nations. The diverse cultures of the performers influenced their performances as well. It was like a reggae, rap, indie rock, electronica show all rolled into one.
When I go to a concert where I only know a handful of songs, I usually get so distracted waiting for those songs to be played, that I can't focus on the other songs that I don't know.

It was like this band knew what I was thinking because the second song they played was the ONLY one that I had ever heard, "Lebanese Blonde" from the Garden State Soundtrack. I also happened to be in the company of my friend Melanie, who is both Lebanese and Blonde. Once that song was out of the way, I was able to enjoy the rest of what they had to offer, which was a lot.

I always get a kick out of seeing a band in person for the first time because how I picture them to look is almost never how they actually look in person. I've heard "Lebanese Blonde" a hundred times, but seeing the little African woman with dreads that almost touched the floor sing it was awesome. I wasn't expecting that.
There were some things I didn't get about the concert, like the guy dressed in camoflauge and the video of the old, creepy dude doing insane yoga poses. I wonder if, like Radiohead, maybe I'll just never understand it. Overall, Thievery Corporation put on an unexpectedly entertaining show that rocked my Sunday.
No, seeing a band I haven't ever seen before is not terribly out of my comfort zone. Seeing two concerts in one weekend for free IS new. Liking a band like this, also new. And I saw a woman with two tattoos under her armpits, definitely new.

On second thought, I think my life did just change.

Posted by Stephanie Gallman at 11:54 PM

Email ThisBlogThis!Share to TwitterShare to FacebookShare to Pinterest
Labels: Melanie