Due to an insatiable curiosity about pretty much everything, I have enrolled in several adult education classes since leaving college. From golf lessons to improv comedy classes, I've refused to let graduating keep me from continuing to learn about new things.

My mom, as a 29th birthday/I think this blog is nuts, but I'll support you anyway/you're a terrible cook present decided to enroll me in a class of her own choosing, making Day #21's thing I've never done before: take a cooking class. 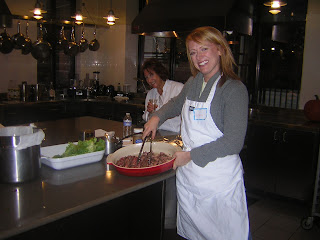 When I arrived at the class, I was a little surprised to find out that the Viking Cooking School is actually in the Viking Cooking Store, making the entire experience somewhat like an upscale Tupperware party. Come on in, we'll feed you, show you how everything works, and hopefully convince you that if you don't purchase the equipment used to prepare the meal, then you'll probably never be able to recreate it.

It must work, because I fell in love at first sight when I walked into the demo kitchen. High-end stainless steel appliances, an oversized island for us to learn on, and all the fun tools, including our very own knives, cutting boards and lime juicers. Had I stayed much longer after class was over, they probably could've talked me into buying a new range for my apartment that I don't own. I truly felt like I had walked on to a Food Network set.

Had I had that kitchen all to myself, I probably would've pretended that I had my own cooking show. I'd offer commentary on everything I was doing, look into the camera and smile, saying, "Now don't be afraid to have a little fun with it," as I chopped green onions energetically. "Cooking is supposed to be fun!"

The teacher was a little wacky and all over the place. She also felt a need, and I'm still not sure why, to remind us of her extensive cooking resume throughout the entirety of the three hour class. It was so awkward, that there were times that I wanted to stop her and say, "No need for that, Sandra. I am going to assume that based on the fact that you're teaching this class, you're pretty well qualified. Also, I've been eating the same batch of spaghetti for two weeks, so really, anything that goes on in this class will surely be a step in a positive direction."

She was entertaining and sweet though, and happy to serve us wine when we asked for it, even if it meant breaking the cooking school's rules. So in my eyes, she's Teacher of the Year. 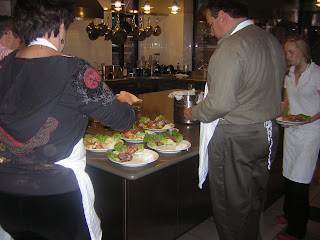 In all of the group classes I've taken as an adult, it's always interesting to see who else is going to show up. I mean, you hope that you're going to have at least one person that you can bond with. But it's been my experience that sometimes the only thing I've had in common with the other people in the class is that we both are in the class. And that's it.

In my "Thai Dinner Party" class there were two women presumably in their 30's and two couples, who were friends with each other and there to celebrate their birthdays and anniversaries. They were the ones that pushed Sandra to keep opening more bottles of wine (you thought it was me, didn't you?), telling her that they weren't able to get the full cooking experience without a little alcohol in their system.

Sandra began the class by serving us some Thai appetizers and telling us that we'd prepare three courses: Thai Beef Cups, Tom Kha Gai (a spicy soup), and Pad Thai with Shrimp. We would spend most of the class prepping each dish separately, and then during the last fifteen minutes, we'd assemble all dishes at the same time.

Five minutes into the lesson, Teacher Sandra says, "Stephanie, watch this rice that's toasting and make sure it doesn't burn."

Easy enough, I thought. Under control. We went on to chop green onions and garlic and talk about fish sauce. 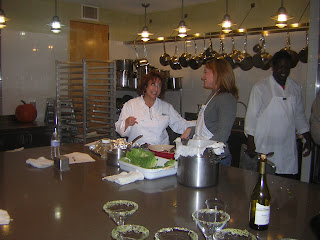 Married guy with braces from across the island says, "Well, I guess Stephanie's going to be the weakest link in this class."

Everyone laughed, including me, but I was embarrassed. We hadn't even been in the class for an hour, and this guy was already calling me out? I did not like it.

Sandra said the rice was "perfect." So there, married guy with braces.

We proceeded through the prep work for all three dishes and learned about proper knife technique, an easy way to peel ginger (using a spoon), and how to infuse broth with lemongrass. I don't think I had ever even seen fresh lemongrass before this class.

I had to laugh at the enormous amounts of "one-upping" (see: one upper, http://one-upper.urbanup.com/2497977) that went down in this class. I wanted to roll my eyes when everyone was telling Sandra just how devastated they were that Gourmet magazine went under. "I can't even talk about it," one woman said dramatically. I mean, I can hold my own in a kitchen, and I've eaten a lot of good meals over the years, but I certainly don't know everything that there is to know about food. Everyone here made an extra effort to let the teacher know that they knew all about the obscure ingredients she was talking about because they, too, had experimented with them. At one point it became a "name your favorite farmer's market," the further away from civilization, the better.

Oh how I wanted to trump all of this nonsense and tell these people I was just in Thailand less than a year ago, sampling authentic Thai cuisine. But I refrained.
We finished the assembly of our Thai meal and then it was time to eat. I had stayed close to the Tom Kha Gai (the soup) because it had been my responsibility to fish out of the lemongrass stalks with a spoon. Of all the things that we ate, I liked the soup the least, and it was the one dish that I worked the most on. Go figure. The Pad Thai, assembled by married guy with braces, was my favorite. Though we got off to a rocky start, he ended up being really cool. He actually is a really good cook who definitely knows his way around the kitchen. He and his wife biked through wine country earlier this year and had a lot of funny stories to tell. His wife asked me if I was dating anyone. I said no, and then she proceeded to rattle off a list of good ways to meet other single people, including some wine tasting class and the Atlanta bike club.

Then they both said they wanted to introduce me to their son...who is 19.

Maybe he's right, but I kept thinking about this 19-year old college sophomore having the time of his life, completely unaware his parents are trying to set him up with some girl they met at cooking class. And then I wondered if this is how my dad's conversations with potential suitors goes. Does he shoot for someone within my age range, or does he just throw it out there to anyone?

This exchange was indication that cooking class for Stephanie had come to an end. I thanked Sandra and my new friends and got the hell out of there. What a fun afternoon, though. I would definitely like to go back, if for no other reason, then just to cook in their kitchen.
Thanks for the birthday present, Mom!
Posted by Stephanie Gallman at 10:46 PM