Watching the professional skiers and snowboarders do their thing on Tuesday night inspired me to tackle a mountain of my own. Drinking too many Sweetwater and Oktoberfest beers on Tuesday night made me feel like I had been tackled. But there was no backing out. I had already committed to making Day 25's thing I haven't done before to hike Stone Mountain. 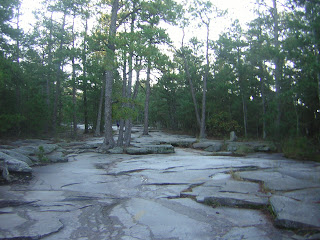 I always hesitate to say, "hike" because I don't know what "hike" really means. Isn't hiking just walking? When does a walk turn into a hike? When there is an incline, perhaps? I wrote "hike" because "walk Stone Mountain" sounded weird to me. But all we did was walk. To further confuse this issue, I wore running shoes, not hiking boots.

My friend Bug (not her real name, just what everyone calls her), accompanied me on this journey. She hikes Stone Mountain often, so she knew just what to do.
At the risk of sounding like a complete idiot, when we arrived a the base of the hike, I was genuinely surprised that the mountain was completely made of stone. I know, I know, Stone Mountain. It's in the name, dummy. Correct me if I'm wrong, though, but isn't Greenland, the country, covered in ice while Iceland is green? Can you tell I have no idea what I'm talking about? Anyway, I had no idea about Stone Mountain. Let's go hiking! 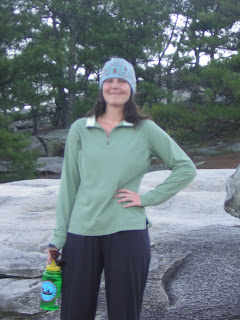 Just like any gym or park, there were people at the base of the mountain giving it all they've got doing push ups and jumping jacks before starting their workout. I don't trust people like this, I think they are show offs. I mean, jumping jacks? Next to your car at a public park? I run a 10K every year in Charleston, South Carolina and it always amuses me to watch the super runners jogging to the starting line, or even better, finishing the race, and then turning around and running the race route backwards. Sometimes we roll down the windows and yell angrily, "Overachiever!" at them. Seriously, what are you trying to prove? Are you so full of energy that you feel the need to run to the starting line? You're not late, the race doesn't start for another hour. Better save your energy for when I find you at the finish line and make fun of you for being so lame. 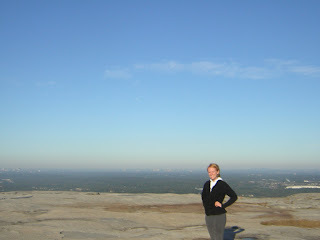 There's not a whole lot to say about the hike, other than we dominated the mountain. Are you surprised? I mean, really.
There were some pretty interesting characters along the hike worth mentioning. My favorite were a group of seemingly confused individuals twirling around in circles and shouting. At first I thought they were drunk because of their nonsensical moves and comments, but then I realized they were holding some sort of spiritual service on the mountain. They could've been dancing, although they looked more like wasted sorority girls wandering around looking for the bathroom at a band party. I am all about praising the Lord, and this was a beautiful place to do it, but I thought, "this mountain is steep, if you're going to sway around awkwardly, you should go back to flat ground." Perhaps they thought being "closer to God" meant climbing up to get as close to where God lives. Regardless, I was concerned for their safety and wished they had chosen a more stable place to worship. 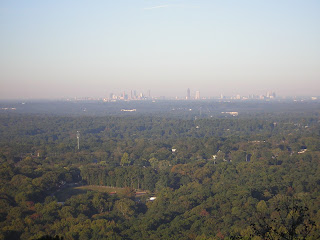 The view was pretty amazing at the top too. Luckily we chose to hike on a day that was relatively smog-free, which in Atlanta, can be a challenge. Nothing like some not-necessarily-clean-but-cleaner-than-what-you're-used-to mountain air to get your day off to a good start.

I only fell once, too...well, twice, actually, on the way down the mountain. It was bound to happen and these spills, while not graceful, didn't yield any huge injuries or bruises. Miley Cyrus was right when she said sometimes I'm gonna have to lose. But not this time.
Posted by Stephanie Gallman at 8:50 AM

Email ThisBlogThis!Share to TwitterShare to FacebookShare to Pinterest
Labels: Bug