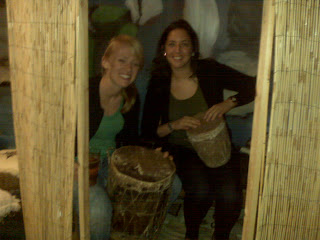 Another highlight of the espresso buzz was that it suppressed, for a time, my sometimes overactive appetite. I was enjoying the buzz so much, I forgot that it was dinner time. A couple more cups and I might drop a jean size. Unfortunately those two shots can only do so much, and by the next day my appetite had returned in full swing.

Time for a food challenge. I told a colleague about this day's challenge and his response was, "Is this whole project all about you trying foods you haven't eaten?"

So what if it is? I'm a pretty adventurous eater, I'll try most anything once, and there are currently only two foods on the list of things I do not like (thanks a lot, beets). That said, there are also a lot of foods I haven't tried, so I think this is absolutely the opportunity to try new ones.

I sort of developed an attitude about trying exotic cuisine, because for me it's as much about the atmosphere. I want to experience the culture and the people, a scenario best achieved by being there and dining amongst the locals. I've had some of the best Thai food in the United States but when I was in Thailand being served by Thai people and eating at a restaurant that resembled the house in Swiss Family Robinson, it seemed to taste better. Before I ever tried it, I wanted the first time I ever ate sushi to be in Miami at some posh sushi bar. Miami = Sushi? No, but in my head that's the city where I could fully embrace the sushi experience. 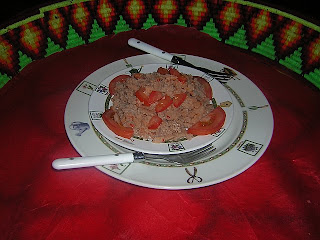 I was in 11th grade when I finally found someone that would take me to eat it and we did so in an Irmo Piggly Wiggly shopping center at a place called Inaka. Not quite how I had pictured it (I wasn't even wearing a sundress!), but the sushi was fabulous.

I don't imagine Africa being anything like Cheshire Bridge Road (unless it's full of seedy nightclubs and hole-in-the-wall restaurants) so I was going to have to modify and adjust my expectations again, because the the Day #11 thing I haven't done before was eating Ethiopian food. In Atlanta.

My brave friend Katy agreed to join me for this challenge and we met at Enat Ethiopian, http://www.enatethiopiacafe.com/ a dive of a place that I had heard great things about. Katy called me before I arrived to tell me she had made it and said, "looks like it's a quiet dinner for two."

What is it that they say about restaurants that are always busy? That probably means they're good, right? So, what about a restaurant where you and your friend are the only patrons? Is the opposite true? Should we run? We stayed. On with the adventure!

They set the restaurant up so that if you want to eat at a table, you can. But we were ready to get the full experience, so we asked the hostess/waitress/cook (not sure of her name, but she seemed to do everything there) if we could get sit on the floor. Well, not really the floor, but little stumps on the ground in front of a larger, raised stump. So we did. If I'm being honest, it was awkward. We were sort of straddling this tree-trunk like table, unsure of whether to sit straight up, or stay hunched over. I'm all about authenticity, I just think a table would be more comfortable.

The menu seemed rather basic, broken into three categories: Beef, Poultry, and Vegetarian. We went for the Tomato Fitfit for an appetizer (Chopped tomato and green peppers tossed with injera) and for the main course, Kei Wott (Hot and spicy beef stew with very lean chopped beef simmered in a hot and thick barbecue sauce & purified herb butter with exotic spices added) and the Doro Wott (Chicken cooked and perfectly simmered with seasoned sauce of berbere and served with hard boiled egg). I have no idea what any of that is, but that's my co-worker told me to order, so I did. 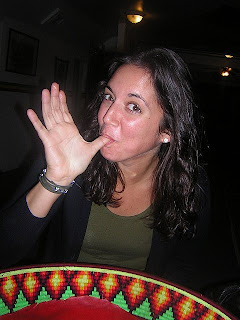 The best part of eating Ethiopian food? You eat it, as the menu points out, with the utensils God gave you: your hands. An excuse to revert back to being a toddler and make a mess with my food? Sign me up!

When the hostess/waitress/cook brought our appetizer to us, though, she did so with two forks. What happened to eating with our hands? Is that just for the main course? Or did think we couldn't handle it, so that's why she included the forks? I want to eat with my hands!

We looked at a couple that had arrived since we had sat down to see what they were doing. But they weren't eating and the hostess/waitress/cook was nowhere to be found. So we dove right in, with our hands. I don't know if we were starving, or if not having utensils overwhelmed us both with excitement, but Katy and I dove into that meal as if it would be our last. We both loved it! The injera is pancake-like bread that both dishes were served on. We used it like a tortilla to make little Ethiopian burritos. 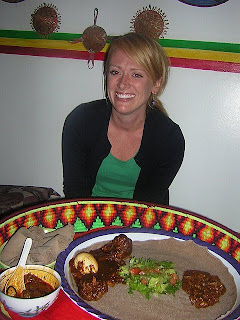 We ate until we could eat no more. Well, until we wanted dessert, that is. It was a little confusing, though because when we asked hostess/waitress/cook for dessert she said they didn't have any. Then she disappeared for a while and returned with baklava. Apparently there are Greek influences in Ethiopia, or at leas there were at this restaurant? We didn't care. We ate it right up. Katy, who is Greek, was loving it.

Still full the next day she sent me an email, "I feel like an overstuffed stuffed animal. But it was so good!" Couldn't have said it better myself.