DAY FOUR: Am I stupid? Don't answer that.

I'd like to think of myself as a fairly intelligent person. I always challenged myself academically in school and maintained good grades (not that intelligence and good grades are always related, but I learned a lot and it showed). As an adult, I've managed to keep learning daily by surrounding myself with people smarter than me, reading smart books and keeping an open-mind to ideas that may be different from my own. Most importantly, I’m very aware of the fact that I don’t know everything and I think that makes me smarter than a lot of people that know. 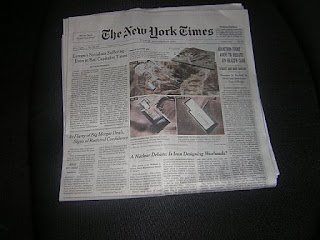 The New York Times set out to prove me and everything that I thought about my smarts wrong Wednesday, since Day #4 thing I've never done before is attempt to complete a New York Times crossword puzzle.

Now I've obviously attempted crossword puzzles before. When I was in college at the University of Georgia, the Red & Black 's crossword was an almost-daily project used to pass the time in boring lecture halls. And now, if you handed me a People magazine crossword, I could complete that sucker in a half-hour, thanks to an unhealthy amount of pop culture knowledge.

I knew this challenge was going to be different than a college newspaper or pop culture puzzle. According to crossword connoisseurs, the New York Times puzzle was the creme de la creme, no joke, serious crossword.

The friend that suggested this challenge first told me I should tackle Sunday's puzzle. Then she paused, furrowed her brow and said, "Well, Sunday's is the hardest. Why don't you try Monday's? Or Tuesday's? They're easier."

Thanks for the vote of confidence. So after my surprise concert trip on Tuesday, I decided to do Tuesday's puzzle on Wednesday to write about it on Thursday. Confused? Well then that makes two of us, because this crossword puzzle completely rocked me. Am I stupid? Or do I just not speak "crossword?"

A friend trying to make me feel better suggested it was probably the latter. "You really have to do them everyday to get good at them," he said.

But still, I would've liked to have had a better showing on Day #4 of this project, on the paper's second easiest puzzle of the week.

Here are a few, and there were a mere few, highlights of the answers I DID know.

2 DOWN: "Evil Woman" Band, for short
ANSWER: ELO (I knew liking music would pay off!)

The rest was mostly a disaster. I even put my glasses on when I got home to work on the puzzle, hopeful it would help. Turns out glasses only make you look smarter, they do not increase your intelligence, or your ability to do crosswords. 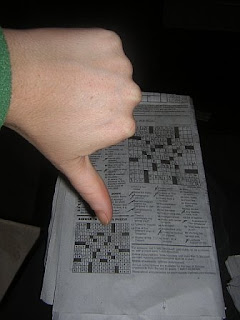 21 ACROSS: Last choice on a questionnaire
ANSWER: Come again?

33 DOWN: Insurgent Group
ANSWER: I hate you, New York Times! I hate you!

I'm down, but I'm not out. This is merely game one of what I plan on being a very long series.
Posted by Stephanie Gallman at 1:13 PM