This summer, a couple of colleagues of mine and I engaged in an email conversation that eventually led to music, which eventually led to my friend John confessing that he liked the band Nickelback. Suddenly our lighthearted, funny banter took a serious, tragically sad turn.

I was shocked. Stunned. Nickelback?! "I am without words," I wrote to the group. 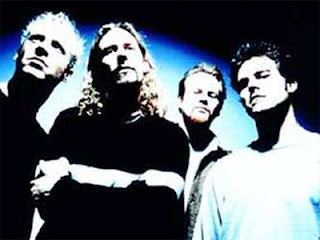 "I know it’s wrong. I know they represent all that is horrible about today’s rock music," John admitted.

Up until this moment, I had always thought John, a musician himself, had excellent taste in music. Our friendship was founded on our mutual love of the band Earth, Wind and Fire and their song, "September."

I tried to help him out, certain this was one lapse in judgment that could be corrected. I asked the group if liking three good bands could cancel out liking one terrible band.

Kim replied to my suggestion, "No. But the first step is admitting you have a problem, so bravo, John!"

This email exchange was one of many times that I have publicly divulged my hatred for Nickelback. Every time I am listening to the radio and one of their songs comes on, my stomach turns and I quickly fumble around to change the station. Even their physical presence annoys me and when they performed on one of my favorite morning talk shows, I was disgusted. I can't even stand to look at them.

But truth be told, I hadn't really ever listened to them. I mean, I'm certainly in good company by hating this band, but is it really fair to hate them just because a lot of other people do?

John sent me an article that makes a valid point: Nickelback has sold over 30 million albums over the last few years. (http://www.atlantamusicblog.com/news/2009/08/music-man-30-million-nickelback-fans-cant-be-wrong-or-can-they-pt-1.html#) Many people obviously like them enough to buy their albums. Maybe I should give them a chance before casting them aside? This is my year to be open-minded.

Or maybe I'm a glutton for punishment? Really I just want to be an informed music critic. If I'm going to talk this much smack, I think I better be able to back it up. So, the Day #23 thing I've never done before is: download and listen to an entire Nickelback album. 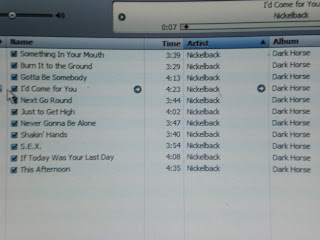 "Why? Why would you do that?" was the resounding response I received from most of my friends when I told him the day's challenge.

"Nickelback is a metaphor for what is wrong with the world," my friend Jeff said when I told him what I had done.

I agree, but I had to know just how really terrible they are.

Song #1: Something in your Mouth: This song proved that in addition to being terrible, Nickelback is also offensive. This song uses words like "thong" and "tattoo" and phrases like "sucking on your thumb." I'm embarrassed. For myself and for them.
Song #2: Burn it to the Ground: Sounded a lot like the first song, only I think it's about them (presumably the band?) going out on the town and "burning it to the ground." Good luck finding anyone to go with you.
Song #3: Gotta Be Somebody: I think this is one that I've heard on the radio. All of their songs sound like the same crap, so I'm not positive. He's saying there's "gotta be somebody" for him out there. Not if you keep creating music this bad.
Song #4: I'd Come for You: Sounds like a love ballad. I'd imagine at their concerts, this is when all the couples would grab one another to sway and all the lighters would get fired up. I hated this one the least. What can I say? I'm a sucker for a love ballad.
Song #5: Next Go Round: I can't even talk about this one. Let's just say if this song ever comes on and I'm in a moving car with my dad, I'm going to throw myself out the window.
Song #6: Just to Get High: Friend gets hooked on drugs, sells his mother's ring, ends up in an alley "just to get high." Perhaps he turned to drugs after listening to your crappy music. I don't blame him.
Song #7: Never Gonna Be Alone: Another love ballad. More gross making out by Nickelback fans at their concert. He's telling his love that she's never gonna be alone and that if she ever feels like letting go he won't let her. That poor girl. She's probably screaming, "Let me go! Please let me go!"
Song #8: Shakin' Hands: "She didn't make it this far by just shakin' hands." That's one of the lyrics. Seriously. 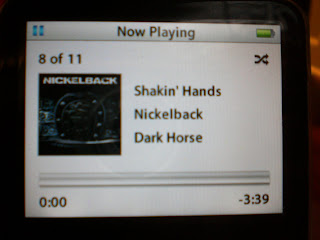 Song #9: S.E.X.: My dad would throw himself out of the window on this one.
Song #10: If Today was Your Last Day: This is the song I fumble around trying to turn the channel because it is ALWAYS on the radio. Living everyday to the fullest because "every second counts." Blah, blah, blah...so cliche.
Song #11: This Afternoon: He decides to not clean his apartment so that he can party in the afternoon with all his friends. What friends? I liked this song only because I knew it was the last one on the album.
Forty-four minutes of music turned out to be 44 minutes of torture. If hell has a soundtrack, I'd imagine that Nickelback would be singing quite a few tracks. I've jumped on a lot of bandwagons that turned out to be wrong, but it turns out the "Nickelback is horrible" bandwagon is appropriate. They suck.
Thanks to purchasing their album, iTunes is now suggesting other music "Just for Me," like Creed and 3 Doors Down. Um, no. This challenge was a mistake. Let's not continue it.
Someone forwarded me an email recently with a list of several funny comments, but my favorite simply said, "That's enough, Nickelback."
Yes, that is enough.
Posted by Stephanie Gallman at 10:47 PM

Email ThisBlogThis!Share to TwitterShare to FacebookShare to Pinterest
Labels: Dad, John, Kim B.