I am always surprised by those responding that they are reading it and even more surprised at those who have suggestions for the next thing that I should do.

My friend Paul, for instance, emails me on Friday. "How about a bear fight? This weekend. As something you've never done before?"

"Bear fight?" I respond, quite sure, and quite hopeful, that this had nothing to do with real bears.
"Yes," he replied. "A Jager Bomb, followed by a Jager shot, followed by an Irish Car Bomb." 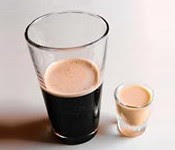 Ouch, I think. True, I have never involved myself in this kind, or any kind, of bear fight. The crowd that would be present for the challenge would be entertaining and prime blog material. I was excited about their enthusiasm and willingness to participate. So it was set. Friday night, after work, I would do a Bear Fight.

And then I started to freak about it. I really didn't want to this blog to turn into write ups on all of the stupid things I involve myself in over the next year. And this bear fight had high potential for stupidity. I asked my friend Vic if he'd ever done a bear fight. He had.

"Worst. Decision. Ever." he said. He said he did several bear fights in one night and vowed never to do them again.

"Well, it's for the blog," I explained, "as something I've never done before."

"Stephanie, just because you haven't ever licked the back of a cab seat doesn't mean that you should," he said.

Then I remembered I'd promised my dad, when I was all hyped up on espresso, that I would let his suggestion be my Friday activity. I decided to put the bear fight on hold, and keep my promise to my dad. Day #13's thing I haven't done before: contact a guy that my dad wants to set me up with.

That's right...apparently things have gotten so bad for me on the dating front, that my parents are getting involved. My dad met this guy at a wedding last month, he just moved to Atlanta, so my dad passed along his information to me and told me to get in touch.

My dad insists he's not trying to set me up on a date with this guy, and it's simply about me helping out someone that's new to town. But since giving me the guy's number and email address, he's asked me about it with the same consistency and concern that he asks me about the last time I got my oil changed and if I'm wearing my seat belt, so I'm not convinced. He REALLY wants this to happen.

Maybe I should reconsider the bear fight.

I'm always open to a set up. I've only been out on a few and none so far panned out, but all were really strong efforts. ALL of these semi-successful set-ups were constructed by my peers.

My parents and their peers however, almost always seem to miss the mark on someone that I would match up with, or they are so incredibly awkward about it, the meeting is dead on arrival.

Back when I was in college, my mom wanted me to meet this guy who was student teaching at her school. I popped in one day to surprise my mom at work, expecting for her to be happy to see me. Instead, she seemed frustrated as she exclaimed, "Eddie JUST LEFT! Why couldn't you have arrived 15 minutes earlier?!" She spent the rest of my visit trying to come up with a reason for us to take a walk to his classroom. Sadly, Eddie is now happily married to someone else, and I know my mom is convinced it's only because he and I never met.

More recently I was at a wedding and before I could even take a seat for the wedding to begin, the mother of the groom said seriously, "I've got a groomsman I want you to meet." She told me she was going to get one of the other groomsmen, David, who also happens to be my friend, to introduce us. But apparently David took too long to make it happen, because less than a hour later, she grabbed my arm and marched me across the dance floor to introduce me to this poor guy. It couldn't have been more awkward for him or for me. We struggled through five minutes of small talk and then quickly parted ways. David, who knows me pretty well later said, "Of all the people I would ever set you up with, that guy is close to the bottom of the list."

I don't know if it is my age or what, but sometimes lately the only trait people take into consideration when setting me up is that I'm single. Not what I like, what I don't like, what kind of person I am. "Stephanie, you're single, this guy's single, surely you're the only two people your age that are left. I think you guys would be a PERFECT match."

But honestly, I'll try anything once, even if it is emailing some guy that my dad thinks I should meet. So I did.

The email was short, and light. I certainly didn't want to freak this guy out. I'll save that for our first meeting. I simply introduced myself, explained that my dad had met him at a wedding a couple of weeks ago (oh my God, did I really just type that? Please kill me.), and that if he was up for a drink or lunch, I'm game.

So, with the email out there, all there is left to do is wait. What if my dad was so weird to him at the wedding that he doesn't respond? Then it's like a double slap in the face, both to pops AND to me.

Don't worry, Dad. He emailed back. I'll keep you (just Dad, not necessarily ALL of you) posted.
Posted by Stephanie Gallman at 2:22 PM

Email ThisBlogThis!Share to TwitterShare to FacebookShare to Pinterest
Labels: Dad