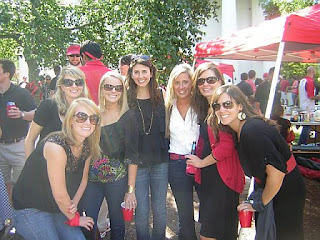 So with my red nails shining, I was ready to head into the weekend...my first weekend keeping a blog.
I'm still trying to figure out how this blog is going to fit into my regular life. I hadn't really planned ahead of time what the thing I hadn't done before would be, but I knew I was going to the UGA/LSU game on a party bus with 10 friends, so the possibilities would be endless. And sure enough, attempting to do something I've never done before proved to be a whole other experience when my friends (and beers) were involved. Suddenly the suggestions were flying.

Girl Friend #1: Steph, were you with me when I went swimming in the fountain on North Campus?
Me: Um, no.
Guy Friend #2: Streaking? Are into that?
Me: Hmmm...I don't think so.
While I appreciate everyone's enthusiasm about the blog and such creative ideas, the plan in my mind for the Day #7 thing I haven't done before was to ring the Victory Bell behind the Chapel on North Campus. I know what you're thinking, fellow UGA graduates, and I know! I'm sorry. I'm a disgrace. Ringing the bell was something I should have taken care of when I was in school, but I didn't.

So, that was the plan. But apparently I forgot to fill in my friends on the football team, because Georgia did not beat LSU. My nails are not the good luck charm I thought they were. There would be no ringing of the bell.

Prior to the game starting, in the midst of our tailgate, an over-served, super-excited Georgia fan with a moustache approached my friend celebrating her birthday. "How about a birthday kiss?" he asked. She agreed. Apparently it wasn't just the birthday girl that he was interested in, and the moustached man was ready and willing to give out smooches to anyone who would agree. My other friend turned towards me with an evil smile and said, "you've never kissed a guy with a moustache, have you?" No, I had not. So I took this spirited fan up on his offer, making the Day #7 thing I've never done before was to kiss a guy with a moustache. Not a beard. Just a moustache.

It was innocent, it was fun, it was in the spirit of the Georgia Bulldogs and the excitement of the game. It is absolutely mortifying to write about it.
I mentioned this guy just had a moustache and not full beard, because I actually happen to like guys with beards. A fact I recently shared with co-workers in another embarrassing exchange.
Me: "Girls dig dudes with beards!!!"
(Awkward Silence)
Me: "Um...well, I guess I shouldn't speak for all girls."
But Magnum P.I. didn't have a beard. He had a moustache. Just a moustache. A gross, tickly moustache. And the moment it happened, I thought, "I really hope I don't have to write about this."
Now it feels like the Day #7 thing I haven't done before is embarrass myself on my brand new blog and bring shame to my family.

Lesson learned: I can't count on anyone else for this little project, so I better have a back up plan. A better back up plan than to accept a kiss from a guy with a moustache.

Posted by Stephanie Gallman at 4:28 PM