It's that time of year again! Halloween is almost here and Thanksgiving is right around the corner. It's time to load up the kiddies in the car and take them to do various fall activities and then take pictures of them and post them on Facebook! 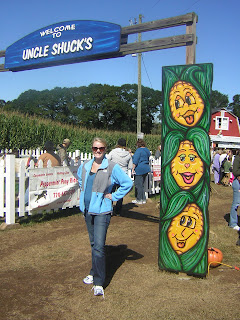 Everytime I log on, my Facebook "News Feed" is full of status updates that say, "Off to the pumpkin patch!" or photo albums full of Apple Picking/Hay Rides/Pumpkin Farm photographs. They are all ridiculously cute, but I can't help but to wonder if this is a requirement of all young families? I shared my confusion with my friend Mark, who has young kids of his own. Why, once you have kids, does picking your own produce become a way to spend your weekend, I asked him.

He had just returned from apple picking the day before. A cynic like me, I fully expected him to tell me how ridiculous it was and that the only reason he went is because his wife made him go, but he didn't. He said, "well, it wears them [the kids] out. And it is actually a lot of fun." If he's saying this, then maybe these fall activities are worth the price of admission.

I don't know when or if I'll have kids of my own, but I had to know what all of the fuss was about. So I recruited a friend to accompany me on Day #22's thing I've never done before: visit a pumpkin patch and complete a corn maze. 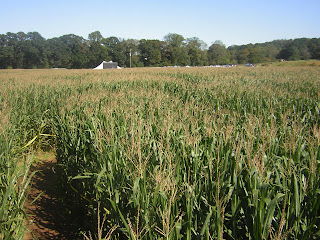 The way I had envisioned this corn maze going down was a big group of my friends and their husbands and boyfriends (all dressed in fall-colored fleece) would head to the country, share some laughs in the corn maze, high-five each other and drink apple cider. Think J.Crew catalog. But after sending an email out to those that I thought would join in on the fun, I only got one affirmative response from my friend Trish. Sometimes when I've invited friends to do something that they didn't want to do, they've come up with elaborate excuses as to why they can't, but this time around, most of them flat out said, "I just don't want to." Even tempting the girls with promises of outlet shopping wasn't enough to sweeten the deal.

Trish, the good sport that she is, was on board from the beginning. I should've known she would come along. After all, she was my adventurous travel companion the summer after our sophomore year of college when we traveled through Europe together and lived in Spain for a few months.

I'm sure she was thinking, as I was, "We dominated Europe. And now we're going to dominate Dawsonville."

We arrived at Uncle Shuck's Pumpkin Patch (www.uncleshucks.com) on a beautiful fall afternoon. I was pretty proud of myself for getting up and out the door fairly early for a Sunday. But by the time we arrived, around 1:30pm, this place was bustling with activity. There were people everywhere. Some of them were already on their way out!

Trish had advised me before we left Atlanta that she had been on the Uncle Shuck's website (awesome) and it said because of the recent rain, the corn maze was muddy, so it was best to bring old shoes when visiting the farm. The website did not say that the mud was going to make everything smell like poo. But it did.

The girl that sold us our tickets to the maze paused during the transaction, looked at both Trish and me and said, "and you know, there will be NO refunds on the maze today." I nodded in understanding, but this statement confused me on many levels.

1. What do you mean, "No refunds today?" Do you offer refunds on other days and are just choosing not to on this day?
2. What is going on in that maze that is so bad that has led so many people to ask for a refund?
3. Who asks for a refund on an $8 corn maze?

The tickets to enter the maze doubled as "maps" to the maze. I use quotes because a map at Uncle Shuck's farm is merely a piece of scrap paper with a bunch of black squiggly lines drawn on it. The minute we entered the maze, we were lost. We wandered around, picked out groups of people that we thought might know what they were doing and followed them for a while. But corn mazes, at least this one, are confusing labyrinths. Or maybe Trish and I are directionally challenged? 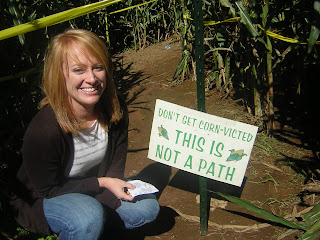 It occurred to me after being in the maze for half an hour, that I just paid to get lost. Lost in stalks of stinky corn. Aren't we usually trying to avoid getting lost? No wonder only one person agreed to participate in this challenge with me. Trish, you're a sucker.

After what felt like an hour of aimless wandering, we finally picked the right group to follow and made it out of the maze and back the farm safely. We walked around the patch for a few more minutes, but quickly realized there's not a whole lot to do at these places without kids. It was time to head to the place we felt more comfortable: the outlet mall.

On our way out to buy our pumpkins and leave, we heard a child having a Category 5 meltdown underneath one of the tents. I don't know what the kid was upset about, but I instantly felt sorry for his parents. I also looked at Trish, who is married, and said, "you do realize that when you guys have kids, you'll be hanging out at places like this every weekend?"

Trish laughed, but we both agreed that the amount of activity we saw on this Sunday was more than we usually see. "Who knew people actually did stuff on Sundays?" I said to her. I'm used to lounging on the couch, maybe doing laundry if I'm feeling ambitious and that's about it. These families were out making memories happen. I think I'm going to put off hanging out at pumpkin patches, and maybe save that for when I have a family of my own. But I think a few more productive Sundays would do me good.
Posted by Stephanie Gallman at 10:46 PM

Email ThisBlogThis!Share to TwitterShare to FacebookShare to Pinterest
Labels: Trish