Suggestions on how to fulfill my 365-day project have poured in since the blog began. I've been amazed at the creativity of some of the suggestions and amused by the ones that are repeatedly mentioned.

Skydiving is the obvious front-runner and though it freaks me out to even type the word "skydive," I am sure going to try to make it happen this year. My friend Dan has already invited me to come along on his 30th birthday skydiving trip in November. I was sort of hoping to build up to take such a jump, but maybe I need to take the opportunity when it's presented.

Volunteer projects and random acts of kindness also keep coming up, which means my friends are a lot nicer and more charitable than I thought. I got an email last week from someone suggesting that I pay the toll for the next person, which is a great idea. I have actually done that before, though, several times, but I liked the concept, so I decided to take it one step further. The Day #18 thing I have never done before was to buy coffee for the person in line behind me.

Wednesday was the perfect day to pull this one off because fall finally arrived in Atlanta. The air was a little cooler and crisper, so there was a high likelihood that people would celebrate the changing temperatures with expensive coffee drinks. Whereas people from the north know fall has arrived because temperatures start falling and the leaves start to change color, those of us in the south can tell it's fall by the specialty drinks offered at Starbucks. It may be 85 degrees outside and all the leaves on the trees are still green, but Starbucks has Pumpkin Spice Lattes, so Thanksgiving must be right around the corner.

I hesitate to call what I did a "random act of kindness" because it was actually pretty calculated. After deciding that this was the activity I was choosing for the blog, I actually drove around the city trying to find a Starbucks that had a drive-thru window. I'm happy to do something nice for someone, just as long as I don't have to look them in the eye when I do it, or--God forbid--talk to them. 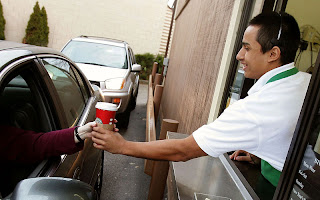 I found the place where my coffee buying would go down and pulled up to the ordering area. The shopping center was bustling, but after I placed my order, I glanced in my rear view window and saw that there wasn't anyone behind me in line. I texted a friend, "What am I going to do?! There isn't anyone behind me in line! How am I going to pull this off?!!"

She texted back, "Huh? I don't think I understand what you're trying to do." I wonder how many times this year I'm going to get that as a response when I tell people about this blog.

Isn't doing something nice for someone else supposed to make me feel at peace? So much for that! I was a nervous wreck.

I pulled up a little further and was elated when a car finally pulled in behind me to place an order. I was really hoping that a poor college student taking a study break would be the lucky recipient of my generosity, but instead it was a sharp dressed woman in a shiny Mercedes. When I was 16-years old I got into my first car accident . . .with a Lexus. Apparently I have a gift for locating nice cars and either destroying them or buying the people driving them things they could afford to buy themselves. Oh well.

I pulled up to pay and let the barista know that I would be paying for the person behind me. I fully expected him to tell me that she ordered a Venti vanilla skinny soy latte with a shot of liquid gold and a sprinkle of diamonds and that this little exercise in kindness was going to cost me a small fortune. He did not. In fact, he didn't seem at all surprised by my gesture. He just ran my card for both orders and handed me the receipts.

Indeed this idea is not one that I came up with myself, but rather something I've been hearing about people doing for years. The most notable, in Washington state, where a woman, wanting to wish a stranger a Merry Christmas with a cup of coffee, kicked off a "pay it forward"chain that lasted several days and 1013 customers participated in(http://www.kirotv.com/news/14907375/detail.html). I paid extra close attention to the local news to see if my act of kindness may have sparked a similar response, but no such luck. Too bad! 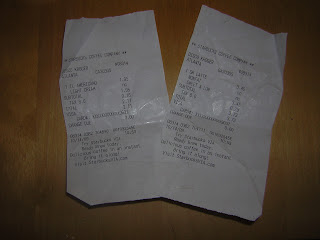 I'm not sure how this woman in Washington handled it when she bought that first cup of coffee for someone else, but I'd like to think she wasn't as awkward as I was. You would've thought I keyed the Mercedes and was trying to make a getaway, because when the barista handed me my cup of coffee I squealed out of the parking lot like a criminal on the run.

"Gooooo!" I pleaded to the car in front of me that stalled momentarily at a stoplight. I kept frantically looking to my left to see if Mercedes was looking. I'm not sure I could've dealt with her acknowledging the fact that I did something nice for her. What if she waved, nodded her head in appreciation or said, "thank you?" Then what would I do? Better, I thought, to keep it anonymous.

When I was safely out of the woman's sight, I felt the rush of what I had just done and I had to laugh. Why so much excitement for buying someone's coffee? And why the frantic need to keep it secret? If I had done something nasty to her, I probably would have stayed to watch her react to it and delighted in her misery. But thinking about her being genuinely surprised and pleased with a free coffee drink made possible by me was embarrassing. Why is taking a compliment or accepting gratitude for doing something nice, so damn hard for me?

There is a good chance that Wednesday turned out to be a great day just because it was so much better than Tuesday and that's what I was comparing it to. On the other hand, kicking off the day by doing something nice for someone else definitely didn't hurt. I also drank my coffee drink while working out at the gym, which was almost like drinking espresso in terms of energy, but it tasted better. I'm not sure if it was necessarily good for my heart, but I was definitely burning some calories on the elliptical machine. I've never done that before and it was awesome.

This blog is my personal challenge to myself. Nothing more, nothing less. My intention wasn't to be a part of some movement for everyone to find new things to do everyday. But if anyone out there is looking for something new to try, randomly doing something nice for a complete stranger is definitely worth it. I spent $3.73 on Mercedes' vanilla latte, but I really did feel good for the rest of the day. There's no way of knowing if she returned the favor for someone else, but it's nice to think about.

And not to get weird like Haley Joel Osment's character in that creepy, but "rip your heart out" sad, movie Pay it Forward, I think we could all afford to be a little bit kinder to each other. Who knows what could happen?

Posted by Stephanie Gallman at 12:41 PM