I learned to snow ski when I was in high school, and since then, I've been skiing a total of three times. Twice to ski resorts in West Virginia (which my hardcore skier friends say doesn't even count) and once to Park City, Utah. 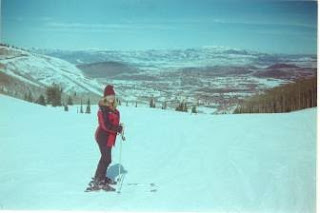 Despite a lack of natural athleticism, I'm not that bad of a skier. Or I don't remember being bad (it has been nine years). But the little skiing that I have done is far from "extreme." In fact, while the guys in our spring break group were challenging each other on black diamond slopes and moguls, my college roommate and I opted for less intimidating runs called "Easy Street" and "Serenity."

I genuinely enjoy skiing, though. I just haven't lived in a place where I had access to do it very often. I'm more of a beach girl.

Any of you jibbers down for Huckfest 2000 & Gnar? Lauren and I just purchased our tickets. Join us!

I read further down to see that this email had been forwarded from another friend. His read:

Sick grindage snuff-film screening @ Sweetwater Brewery next Tues. Anyone want to join? Drink some beers, watch a flick and plan a winter excursion?

Besides "Sweetwater Brewery," I seriously had no idea what any of this means. But Donald taught me how to play the banjo, so I knew he wouldn't steer me wrong. Day 24's thing I haven't done before: go to a Action Sports Movie Premiere at Sweetwater Brewery.

The film, re:Session, put on by Teton Gravity Research, features some of the most extreme jibbers and huckers shredding the gnar at wicked awesome ski resorts all over the world. That, my friends, is apparently ski speak for insane skiers and snowboarders hurling themselves off of cliffs and down steep mountains in several locations including, but not limited to, Wyoming, Algana, Italy, Poland, Slovakia, Colorado. www.tetongravity.com/re_session
Intense. Extreme. Honestly, some of the craziest footage I've ever seen. 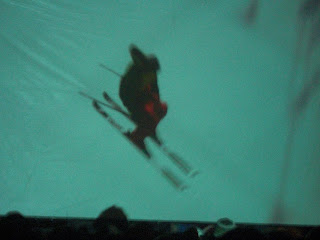 I've always been bummed that I didn't learn to ski when I was little and fearless. Unfortunately, I waited until I was fully aware that if I lose control and plummet down the mountain into a tree, I will probably die. The athletes in this film never grew up, apparently, or they lack the gene that the rest of us have that says, "don't jump off of that or you'll probably get hurt." How wicked awesome for them.
Sweetwater Brewery (http://www.sweetwaterbrew.com/) hosted the event in the courtyard of their brewery. They set up a big screen to show the film and then set up chairs, gave everyone a pint glass and said, "Drink up!" Very outdoorsy and very fun. It was crowded, too. Apparently there are a lot of extreme sports enthusiasts in Atlanta, or perhaps other bloggers trying to do something they've never done before. I even ran into some trouble trying to get my hands on a pint glass. Luckily, the crisis was adverted and no one was injured trying to keep me from the Sweetwater Blue on draft. 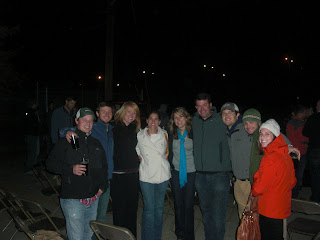 I went to the event straight from work, which was a shame, because, well, walking into this event was like walking into a room full of "my types." You know, the 30-something that looks like he's still in a fraternity that's getting ready to go camping? I'm sure they were not impressed with my suit and pearls.
What a gnarly way to spend a Tuesday night. Good brews, good company, good film and good publicity at the hands of my friend Lauren who told nearly every person she met about the blog (now all of the "my types" know that suit girl is also a loser blogger. Damn!) The movie may have even planted a seed for some sort of group winter excursion after the holidays. None of us won the raffle for the free trip to Jackson Hole (bummer), but an extreme trip in search of some fresh pow pow might just be worth paying for. And I've never been to Jackson Hole, so it would be blog-friendly.
I really hope I don't biff.
Posted by Stephanie Gallman at 12:59 AM