After an eventful and exhausting Saturday, Sunday's plans to go to a shooting range for the thing I haven't done before had to be put on hold.

My friend Courtney anticipated this might happen. She asked me when I started this project, "What happens if you wake up on a Sunday and just feel like laying on your couch all day?" One week in and that's exactly the dilemma that I was facing. To be honest, I'm not really sure how I will combat this issue. I think I may have to handle each day on a case by case basis.

Luckily I had most of the day to figure it out. I watched and cheered for the New England Patriots in their game against the Baltimore Ravens, and that was something that I hadn't done before. But that didn't really count because I was napping during most of it. I thought nothing could put me to sleep better than Sunday afternoon golf, but I was wrong.

Not sure how, or why, but from the comfort of my couch, aching from Georgia's loss, I was inspired to cook something I've never cooked before. I suspect it had more to do with my voracious appetite than it did about cooking, but regardless, the Day #8 thing I haven't ever done before was to make spaghetti sauce. From scratch. 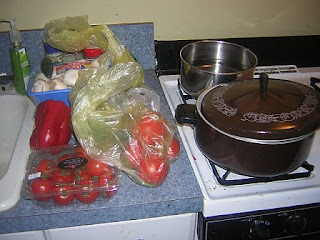 I do enjoy cooking, but I really don't do it as often as I would like. I live by myself, and cooking for one is tough. It's hard to make it to the store sometimes and I eat out so much that cooking just isn't a priority.


A few minutes into this project, and I was beginning to understand why that's the case.

Cruising the grocery store on a Sunday afternoon may have been the worst idea I've ever had. I contemplated leaving my cart full of groceries several times and driving directly to the shooting range to fire off a few rounds. The trip to the market felt like a battle that I was losing. After a solid hour and a half of wandering the aisles and mindlessly choosing ingredients, I had what I needed, and I headed home to begin.

I consulted the Internet and several cookbooks to get a general idea about spaghetti sauce, but I vowed not to follow a specific recipe. I was going to try and get creative. This is a big step for me because when it comes to cooking, I am a recipe-follower. Psychotically so. I know that it has more to do with me not trusting my abilities in the kitchen than it does about being a perfectionist, but seldom do I stray from the recipe. 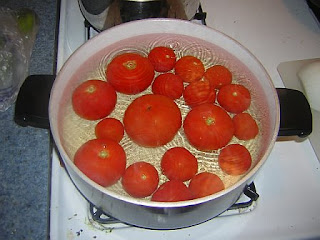 I don't know where I developed this personality quirk. My mother, who is an amazing cook, is the exact opposite. She rarely, if ever, uses a recipe, and can somehow prepare gourmet meals out of the random things she finds in her cupboards. When I ask her for recipes, she usually returns to me a list of ingredients. No measurements, just the ingredients. Sometimes I think she's doing it just to show off, and it drives me crazy.

No recipe to follow? This was going to be a challenge.

I also have about two-square feet of counter space which makes pouring a bowl of cereal difficult sometimes, so I was also up against logistics. And my garbage disposal is on the fritz, which proved to be more of a problem during cleanup than the actual cooking.

Still, I dove right in, poaching tomatoes, chopping onions, mincing garlic. Surprisingly, as terrible as the trip to the market was, I was amazed at how concentrating on the sauce was therapeutic. Deciding what spices I needed to add and which ones I needed to leave out made me forget that I was exhausted and probably would've preferred take out. The end result was delicious, if I do say so myself. I will definitely have to start trusting myself to stray from the recipe more often. 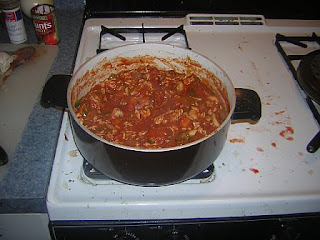 Between the guacamole I made for game day and now my own spaghetti sauce, I'm pretty sure my own cooking show is just around the corner. And thanks to my guessing on how many tomatoes to buy, and not relying on a recipe, I will be enjoying this spaghetti sauce for the next couple of weeks.

Posted by Stephanie Gallman at 4:29 PM