**Editor's Note: there were hilarious pictures taken of this outing, but they are lost on a less-than-user-friendly digital camera. My sincerest apologies.***

When I was a child, my parents signed me up to "play" rec-league soccer. The only female on an all-boys team, "playing" for me simply meant wearing the same uniform as everyone else. I certainly wasn't scoring any goals or helping my teammates to do so. I guess you could say I lacked the competitive spirit required of good athletes, because I preferred skipping around the soccer field picking dandelions like a little fairy.

Some things never change, I suppose, because while I enjoy working out and consider myself a sports fan, I never quite became an athlete. I understand the rules and am an informed viewer, but I enjoy sports from the sidelines.

Whereas food challenges have come pretty easy to me, I suspect trying new sports probably won't. But that's what this whole project is all about, right? So with the help of a much more athletically skilled friend, the Day #12 thing I haven't done before: play racquetball. 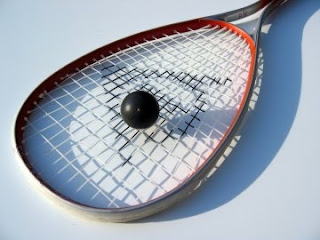 The timing of this challenge was perfect since I had enjoyed, maybe too much, the Ethiopian food Wednesday night. Thursday morning, it was time to hit the gym.

Now despite my lack of athletic prowess, I have dabbled into sports here and there. I mentioned soccer as a child. I played tennis as a teenager. I've also been on kickball teams and softball teams, my goal on both to not screw up so horribly so as to cause a loss for the team while providing enough comic relief so that the team will want to keep me around.

But I can honestly say that Thursday was the first time I have ever stepped foot onto a racquetball court.

I've watched others play and heard games going on in the gym. It looked like a lot of fun, and a great workout, but it seemed a little daunting being in an enclosed space swinging a racket around. My mom even said, when I told her about Thursday's challenge, "Well, you better wear goggles in that small room with all those balls flying around."

Sometimes this blog just writes itself.

I decided against the goggles, because they were terribly uncomfortable and I thought if a ball was headed in my direction I'd be able to get out of the way in time. The second time I hit the ball that day, I did so square into the side of my friend Brad's neck. He laughed and promised it didn't hurt. He also agreed to stay for more abuse, so I hope he was telling the truth. He opted against wearing goggles too. I wonder if he ever regretted that decision. 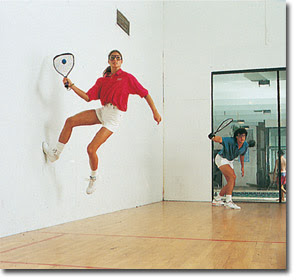 Brad explained the rules, or the rules as he knew them and we starting playing. The main object of racquetball is that the ball has to hit the front wall and can't bounce more than once before you have to hit it again. Sounds easy enough, except when it would hit the front wall and then the back wall, and I'd forget if it had bounced or which wall I was supposed to hit it off of.

Sometimes when I successfully served the ball or if Brad hit a good shot, I'd forget that the game was still going on and I had to move to hit the ball again. It was like it was 1987 again and I was tippy-toeing around on the soccer field.

Thanks to the echo that a racquetball court creates, Brad's instruction giving, my curse word yelling, and both of us laughing provided quite a soundtrack for everyone at the gym that day. My apologies to anyone who had to unwillingly be a part of this day's challenge.

Someone said to me, "racquetball is exactly like tennis." Sure, I thought, except it's not. I've now played both. Both sports use balls and rackets, but that seems to me where their similarities end.
There were a few good rallies, but for the most part what I expected to be true, turned out to be true: I'm not very good at racquetball. But it is a great workout, and I think with a little practice I could get better.

I said to Brad, "we should play once a week. I need practice!" But then I started thinking, with all of these things I have to try and all of the blogs I have to write, will there ever be any time to practice racquetball?
Perhaps the downside of the blog is that by doing a new thing every day, I'm not allowing myself the opportunity to master any one thing. Is trying something once really going to show me if I like it or not, or even allow me to succeed at it? Probably not. On the other hand, maybe this is the way I will learn what I like (Ethiopian food, concert-going solo), what I do not like (beets), and what I need to do a few more times (New York Times crosswords, racquetball) before making a decision.

Maybe with a lot more practice I can make another one of these entries Day # Whatever: Racquetball Tournament Winner.

Oh, and because I know you competitive types want to know: