After such an eventful Saturday, Day 195, Day 196 was not going to be as exciting. As much as I want to believe I'm a happening girl, the chances of be doing something as big as sky-diving two days in a row are slim to none.

On Day 196, I woke up sore, like I'd worked out for several hours in the gym. So in addition to not making it out on Saturday night, I made it a lazy Sunday, not unlike many Sundays that came before.

Thanks to the United States government, however, I did have to do something I'd never done before on Day 196: fill out my census form.

I find it somewhat humorous that the day after I cheated death was also the day that I chose to inform the goverment that, "Yes, I'm still here! I exist!"

The form looked a little intimidating with a lot of bubbles 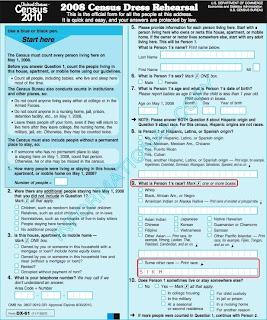 to fill out. I felt like I'd heard the rumblings of controversy surrounding the census, and I wondered if the boxes were the reason why.

But when I started reading through the questions. "What is your name?" Where do you live? How many people live with you?," I wondered, what's the big deal? Am I missing something that's controversial?

Stephanie, Atlanta, One (well, two if you're counting the squirrel, but I was not).

Or so I thought. When I returned from being out of town weeks later, in addition to stacks of mail, I also found slips of paper indicating that a census taker had been at my house looking for me.

Wha? I was annoyed, and kind of nervous. I already filled out my form! Why were they looking for me?

Then I went out to run errands and returned to find a census taker, presumably the woman leaving notes on my door, standing on my porch.

I was on a conference call, and didn't want to deal with her, especially since I'd already participated in the census. I asked her to come back the next day.
"What time should I come out?," she asked me.

Gah, what is their deal?

"Um . . .um . . .afternoon?" I would be out of the house by the afternoon, I thought. I was really trying to lose this woman, though I'm not sure why.

When I went inside my house, I almost immediately saw on my kitchen table the reason for the notes and the visits from the census taker. Genius over here may have filled out the census form, but she never sent it to its appropriate recipient.

I dropped the filled-out form in the mail an hour later.

The census taker, looking all of about 12-years old, arrived the next day, in the afternoon, and I told her that the reason I'd been on the government's black list is because I forgot to mail it.

"Nope, not gonna work," she said, "They'll just throw that form away since it didn't meet the deadline. We're going to have to do this now."

I sighed loudly, expressing my annoyance which wasn't at all fair because it was my fault she had to come to my house at all.

She went down the list of all the questions I'd already answered.

Name?
I told her my name.

Age?
29. (Yeah, that's right, 29. NOT 30. Not yet.)
"And your race?" she said, looking up at me, "Asian? White? African-American?"
Seriously? I was tan from my vacation, but give me a break.
"White."
"Alright that's it," she said, and then she turned and walked away, likely to bust the rest of the neighborhood deliquent with the census.
And that was it. I'm here. I'm alive. I'm white, 29, and I live alone. And I didn't die skydiving! Hooray!
Posted by Stephanie Gallman at 1:00 AM