Of the many things I have to thank my mother for growing up, her forcing my brother and me to write thank-you notes is at the top of the list. 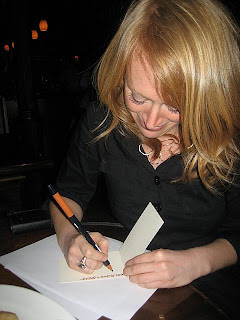 While all of our friends in the neighborhood were out and about the days after Christmas showing off their new toys and new clothes, Jeff and I had to stay inside until all of our thank-you notes were written.

She had but few rules in our house, but she was a stickler for appreciation and thanks to her, I have grown up to be an appreciative adult. In fact, one of my former bosses actually told me that one of the things that impressed him most about me was the fact that after our interview, I sent him a hand-written thank-you note, a practice that has seemingly fallen by the wayside now that email is so popular.

Since I was physically able to write, I have written countless thank-you notes over the years for gifts I've received. But never had I written someone else's thank you notes. Until Day 192, when I offered to help my friends Amanda and Stephen write their thank you notes for their wedding gifts as the thing I've never done before.

Stephen and Amanda were married back in February. Their wedding was a part of this blog, as it was the first wedding I'd ever been to for a co-worker. Like most newlyweds trying to enjoy their new lives together as husband and wife, they've been bombarded with gifts, and therefore also bombarded with thank-you notes still left to write.

I haven't yet purchased their gift, but I figured what better 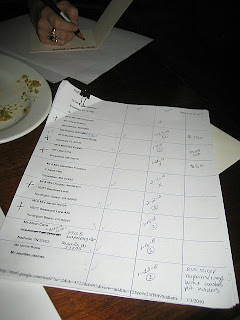 way to celebrate their union than to assist them in their thanks. Little do they know, this is my wedding gift to them: another mention in the blog and 10 less thank yous that they have to write.

We agreed to meet at the Bookstore Pub for some drinks and to tackle this task. Great bar, great food, but possibly one of the most poorly lit establishments that I could've picked, making it extremely difficult to write and see anything.

Like every organized bride, Amanda had a detailed list of all of her wedding guests. Next to each person's name was a description of the gift they'd bought.

She gave me a stack of cards and a list of people she wanted me to work on notes for, all of whom I already knew. Apparently she was willing to take my help, but not if it meant I would be writing possibly inappropriate thanks to her distant cousins.

I can't blame her. Her plan made sense.

"Now can I write whatever I want?" I asked her.

"Sure," she said, cheerfully, obviously just relieved to have some help.

The possibilities were endless and since I knew everyone that I was writing to, I planned on pushing the limit as much as possible. But I promised to share what I was thinking about writing with Amanda and Stephen before actually committing to it on paper.

But as I quickly learned, they were pretty open to whatever, so I went for it, starting with Justin. 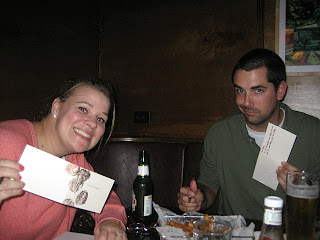 Dear Justin,
Thank you so much for your very generous gift. We took your check, cashed it and bought one hundred MDA Shamrocks at Kroger, in your name. All for the kids. We're really trying to be more charitable as a married couple, and your gift is helping us to do that.

True, Stephen and Amanda actually spent Justin's wedding gift money on cocktails in Belize on their honeymoon, but this just sounded better.

Dear Jackie & Matt,
Thank you for the silverware saver. It will definitely preserve our new silverware for years to come and we truly appreciate it. We also hope it will keep all of our illegal stuff hidden should anyone try and find it. Just kidding, Officer Matt! Thanks so much for coming out to the wedding. It was great having you guys there.

We almost nixed this one, since Matt was in the process of becoming a police officer, but he and Jackie have a sense of humor so we went for it.

Dear Jessica and Andrew,
Thank you so much for the Panini press/sandwich griddle. We will use it to make delicious sandwiches often. We also used it to brand "Ws" into our backsides, because sometimes rings aren't enough to say, "This union is legit." Thanks so much for coming out to the wedding. It meant a lot to have you there.

Anyone that gave money for a gift would obviously be subjected to the wilds of my imagination. My often inappropriate, sometimes offensive, imagination.

Dear Sara and Keith,
Thanks for the generous wedding gift. Thanks to you, Stephen has been "making it rain" for several weeks now. Your presence at the wedding meant so much to us both, and made the day so much fun. Can't wait to hang out with you guys as a married couple!

Mo was next, and though on one hand he would be easy because he would be least offended by my antics, the possibilities with him were endless, making it also difficult. 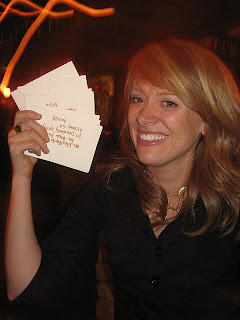 Thanks so much for making our wedding so memorable. Your performance with the pickles and the gummy bears was unforgettable. Thanks also for very extremely generous gift. We immediately cashed your check, threw the money on the floor, and, well, you know…

Dear Mayra and Devon,
Thank you for the very generous wedding present. We took the money and purchased a brand new tiara for [our cat] Coco Chanel. Everyone deserves to feel as special as we did on our wedding day, after all. It meant so much to have you there.

Those who sent actual presents were not exempt from this little exercise, though.

Dear Jill and Bryan,
It was so nice of you both to make an effort to come to our wedding. It made the day so special to have all of our work friends there. Thank you also for the wine chiller and saver. We have already put the gift to good use. In fact, we're drunk right now writing these notes of thanks.

Dear David and Sally,
Thanks so much for coming to the wedding. It meant so much that you made an effort to be there. And thanks for the cheese knives. I'm sure we will get a lot of use out of them when we have visitors at our house. Thank you, most of all for allowing me an opportunity to say, "I can't wait to cut the cheese."

Even those who hadn’t yet sent gifts got notes.

Dear Anna Rhett and Robert,
Thank you so much for coming to the wedding. Even though you haven't yet bought us a gift, we know that when you do we're going to love it. (Editor’s note: Anna Rhett and Robert have since sent a gift, so an appropriate addendum will have to be added to their note).

Amanda promised me she really is going to send the ones that I wrote to their intended recipient, though the fact that she hasn't done so already makes me a little nervous. She claims she is waiting until she's done with all of her thank-you notes before sending them all at once. We'll see about that. If I find out my notes weren't used I will be very sad that my creativity went to waste and that I didn't really help her the way I intended to.

But who knew, after years of griping to my mom about thank-you notes that writing them for someone else's gifts that I will never get to use myself, could be so much fun?

I should offer my note-writing services to others.
Posted by Stephanie Gallman at 1:56 AM