Shockingly, Katy still wanted to hang out with me for Easter after I made her come to the International Pillow Fight with me on Day 188.

Ahead of Sunday, Katy, who is Greek, had decided she wanted to host a Greek Easter dinner for her friends in Atlanta that wouldn't be making it home to celebrate the holiday with their families. My family was just three hours away, and I could've made it home, but having been out of town, I was ready to stay put for a couple of days. After repeatedly promising my mom that church was on my weekend agenda, she granted me permission to stay in Atlanta.

The only thing that I know about Greek culture is what Katy has told me and what I've seen in the movie, My Big Fat Greek Wedding, so you can imagine I was expecting everyone at church to yell "Opa," on my arrival and to, at some point during the service, throw plates.

"Wow," Katy said when I picked her up.

"What?" I said, looking down at my printed dress. She was right, it was loud. But, I said, "It's Easter! It's a celebration. Jesus is risen, let's wear bright colors."

Honestly, as a child, that's what I thought about Easter. When resurrection was just a little too heavy for me to comprehend, I thought of Easter as the holiday when God granted us permission to wear white pants and loud prints. And, of course, Easter was also when that tricky bunny came to town sending me on a wild chase through my house looking for my Easter basket full of chocolate treats and Bonnie Bell lip gloss. 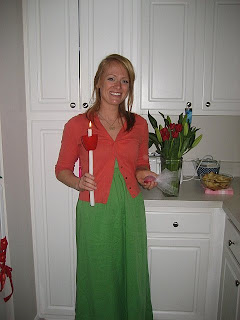 Katy had been to services at the same church just eight hours prior, at midnight, and she told me it was a very low key, sedate ceremony. Everyone's clothes were subdued.

"But it was nighttime," she said, "maybe today is different."

I was freaking all the way to the service scared that I might offend I mean, my hair is loud enough, paired with this loud dress I could potentially look like a neon sign walking through. I knew I should've gone home to go to church with the Lutherans.

Thankfully, when we arrived and met our friend Derek outside, I saw that Katy's people treated Easter just like my people do: with the appropriate amount of pastels.

In fact one was wearing a white ruffled dress with a class black hat. Very fashion forward. Very Easter.

Inside the foyer to the right was a man behind a table selling candles Katy purchased five candles each for herself, Derek, and me in the foyer of the service. She instructed us to light them at the table before entering the sanctuary.

"I bought five candles," she said, "and I say a prayer for each member of my family."

I too, lit each of the candles, placed them on the table, and said a prayer, realizing that after praying for the four members of my family, Mom, Dad, Jeff and Katie, I still had one leftover. That fifth candle was going to have to work overtime, because I used it to pray for all of my relatives, friends, Jeff and Katie's dogs Penny and Ron, and perhaps selfishly, for myself and my loud dress.

We entered the beautifully ornate sanctuary and followed Katy to the front to take a seat. I looked around and noticed that I did stand out, but not necessarily because of my dress. But because seated around us were dozens of other "Katys," beautiful men, women, and children with dark brown hair and olive skin just like her. If my dress wasn't standing out, my strawberry blonde locks and freckled skin definitely were. 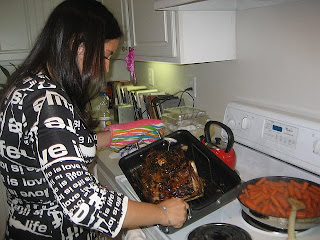 Several priests led the service, all dressed in robes, called undercassocks (I’m serious, that’s what they’re called). The head priest, Father George Alexson, wore a white undercassock that was heavily decorated in gold and red. He wore a square-shaped embellished hat, and with his long white hair and beard, he looked a little bit like Santa Claus. All of the other priests, along with three uninspired altar boys, followed him around during the service like a slow game of follow the leader singing vespers.

The service was heavily based in ritual, and I didn't understand 95 percent of what they were saying because most of it was in Greek. It really was, "Greek to me." But how I imagine Italian opera moves those that don't speak Italian, this service moved me in ways I never could've imagined.

At one point, each member of the clergy, along with volunteers from the congregation, read, or sang, the Easter story in about eight different languages. Only then, when they read in English, did I understand what anyone was saying.

Because I didn't understand the rest of the ceremony, the sound of their monotone voices became meditative for me. The service was an opportunity to not talk, just listen and let my mind relax, which I did. I didn't completely check out, but I felt very calm and at peace. I know the idea is to think about the meaning of Easter, so I did focus on that, but we were probably standing for at least half an hour at one point, so I admit my mind drifted to other places as well, and the experience was highly emotional for me at times.

After the service, I revealed to Katy that there were times when I got emotional. Like tears welling up in my eyes emotional. She said she had a similar experience the night before.

Before we left, Father Alexson gave each member of the congregation a red Easter egg, signifying the blood of Christ and rebirth. I like the idea that Easter is a time of rebirth. A kickoff to spring weather, to seersucker and as I would later learn, baseball. We were three full months into 2010, but for me, it felt like a chance to start the year anew. 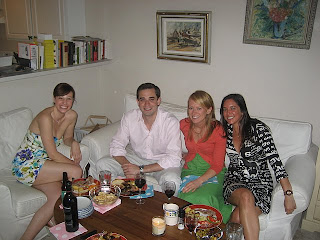 After the service, I dropped Katy off at her house so she could start preparing the food for her Easter dinner and so that I could go home and put on another loud, but less formal dress. She’d actually already started preparing the night before, and when I got back to her house, I understood why so much preparation was needed.

First of all, she’d invited several people, Carolyn, Jeff and Derek, for dinner. And when Katy cooks, people come.

Secondly, she cooked her ass off.

Katy’s apartment has been the site of many memorable meals for me, including when I learned to tolerate beets and where I attempted to make pumpkin pies from scratch. Her Easter dinner was extravagant, starting with hummus and a fish roe dip called Taramosalata. For the main course, Katy roasted a lamb shoulder and potatoes, she glazed carrots and prepared a Greek salad, and sliced Tsoureki, a Greek sweet bread.

Everything was delicious and we stuffed ourselves, and lounged around for hours, talking and laughing about nothing in particular.

After being cooped up in Katy's apartment, Jeff suggested that we take advantage of what daylight we had with an afternoon drive. How very southern and unexpected from New Jersey bred, Columbia University educated Jeff, who also drives a Jeep wrangler, dips tobacco, and loves country music. Seriously? Who is this guy who seems to be a walking contradiction?

The top was off of the jeep, the weather was glorious and we cruised through some of the nicest neighborhoods in Atlanta singing country music at the top of our lungs. Well, Jeff and I were. Katy was laughing at me, and Derek, well, to be honest, I'm not sure what he was doing because he was in the front seat.

I felt like I was 16-years old, and I even suggested we drive by houses of people we knew just so we could honk the horn, just to let them know that our Easter was better than theirs. Actually, I felt better than I did when I was 16. I was full of joy.

As if the day wasn’t awesome enough, we made our final stop at Smith's Old Bar to watch Major League Baseball's opening day game between the New York Yankees and the Boston Red Sox. Jeff is a huge Yankees fan and since I don't really have ties to any baseball team I told him and the others that I would pull for New York too.

Part of me felt badly, since I did just visit Fenway Park in November, the 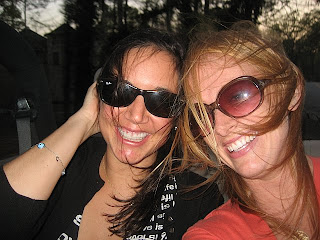 last part in an amazing cross-country trip, and thought it was great. Learning the history of the park was fascinating to me and I thought it was beautiful. But I've never seen a game there. And at that time, if my life or a member of my family's life, depended on it, I don't think I name player on the Red Sox roster.

Yet, as I sat back to watch the Yankees, the team I was supposed to be pulling for, I felt this tug in my heart for Boston. I kept it to myself, certain it would pass. I was surrounded by Yankee fans, I'd already announced that was pulling for them, plus I’ve spent way more time in New York in my 29 years than Boston, I couldn't figure it out.

I didn't tell anyone, and I suspect this news will be a surprise to them, but my support of Boston never went away. I felt happy when the Yankees blew their lead in the bottom of the seventh inning. I beamed as I sang along to “Sweet Caroline,” when Neil Diamond took the mic. And I was elated that the Red Sox went on to win the game 9-7, thinking about all of Beantown bursting with pride yelling, "Frickin wicked awesome." It was like I was a native Bostonian and not just some southerner who has spent no more than 72 hours in the city in my entire life.

My allegiance to this team that I know nothing about, while only apparent to me, was shocking. And I assumed it might be short-lived, special just for Easter, but I’m afraid I’ve become a Red Sox fan, destined for a lifetime of disappointment.

Crying in church and now I care about the Red Sox? What a weird day.

A superbly wonderful, completely awesome, weird day.
Posted by Stephanie Gallman at 8:05 AM