I wish that I could take credit for this one, but it was my co-worker Justin who emailed during the week with a link to an event going on in Atlanta on Saturday, Day 188. 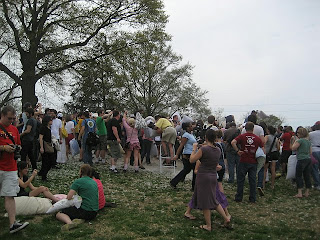 "April 3rd is International Pillow Fight Day," the website read. "Bring a pillow and meet us at Freedom Park on Saturday at 3pm."
Now, I've had my fair share of pillow fights in my life (sorry guys, none of them involved lingerie or my sorority sisters in college), but never with strangers in a park and never on International Pillow Fight Day.
But I liked the idea. I thought it sounded like fun, so I sent the link to the masses and tried to recruit some friends to come with me. I couldn't find anyone that was interested. Not one person. Everyone thought the idea sounded creepy, so I gave up, and assumed that when Saturday came, I'd figure out something else to do.

But Saturday did come, and I couldn't stop thinking about the pillow fight. I really wanted to go. 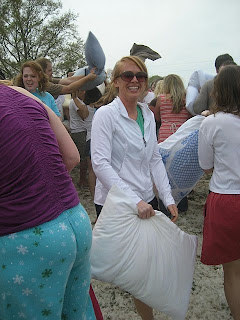 I talked to my friend Katy on Day 188 and asked her if she wanted to come. "I don't think so," she said, not really feeling up to doing anything, much less something as strange as a public pillow fight.
Still, I knew Katy, who's had her fair share of setbacks in 2010, needed to get out of the house. The weather was gorgeous, and the Vitamin D would do us both some good. So I presented the outing as a simple walk through the park where there just so happens to be an International Pillow Fight going on.
Finally, Katy agreed to join me and Day 188's thing I've never done before was to participate in an International Pillow Fight.

I quickly grabbed two pillows from my bed, removed them from their pillowcases (I'm no fool) and threw them in the back seat of my car, just in case Katy had a change of heart and felt like getting in on the action. After parking the car, and lots of discussion, we elected to bring only one pillow for the two of us to share.

I thought it was humorous, and somewhat relieving, that on our walk into the park, there were several people also carrying pillows. Anyone driving by not aware of the day’s significance had to assume we were headed to some weird sleepover or something. But at least there were others on their way to participate in the International Pillow Fight.

When we finally reached the open part of the park, we were shocked. At the top of the hill was a mass of people running wildly whacking each other with pillows. Once we were closer, we saw that despite the website listing in its explicit instructions there should be no feather pillows, there were feathers everywhere. In the air. On the ground. Everywhere. Pillow fights, at least this one, are messy. 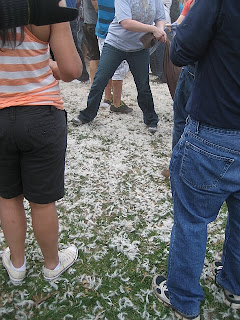 I also noticed that most of the participants were either indie rockers or overweight people in pajamas. The combination was confusing to me, but also amusing that a park pillow fight had become the common thread between them. I couldn't understand why I was drawn to the event either, and I wondered what about this event had inspired them to get dressed (or in some cases, just get out of bed), and come out to the park that day.

I also realized that people wearing pajamas in public gross me out. I don't know why. None of the pajamas that I saw were inappropriate or revealing in anyway, I just hate jammies outside of the home. Plus, it's a pillow fight. Not a pajama party. I know the two events are related, but nowhere in the event description did it say anything about pajamas. Put some clothes on.
Part of me wanted to just stand back and watch, because getting into the action felt like what slowly merging into a stock car race already in progress likely feels like. Challenging. Scary. Downright stupid. But not participating would’ve made for a boring blog adventure. I knew I had to be more than a spectator to this insanity.
Katy jokingly gave me a little push into the action while she took pictures and directed me on whom to hit. I stayed close to the outside, taking a few whacks (mainly on people wearing pajamas) and then quickly got out.
Katy had decided ahead of time she wasn't going to participate, and I didn't push it because she 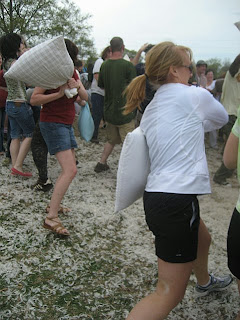 had just had some serious dental work done and if she so much as accidentally bit her tongue in there, I would've felt guilty for the rest of eternity for asking her to tag along.

But after feeling pretty safe inside the masses, I asked her if she wanted to take a turn. I could tell she was intrigued by what she was watching.

"Keep your head down," I instructed, “and DON’T open your mouth!”

She did as I said, took a couple of turns with the pillow and got out quickly.

"Seriously, this is the weirdest thing I've ever been to," she said.

I agreed. It really was.
But in that mass of people whacking each other with pillows, I couldn't help but laugh, and Katy laughed. And we both needed that. I think I smiled the whole time I was there. I challenge anyone to hit someone with a pillow and frown while doing it. Impossible.
So weird or not, I'd consider that a successful little Saturday.
Posted by Stephanie Gallman at 6:16 PM