One of the things that I knew that I wanted to do when I started this project all those months ago was to take a trapeze class. Since watching Carrie Bradshaw learn the trapeze in an episode of Sex and the City, I wanted to tap into my circus roots.

I couldn't find anyone who had ever taken I googled the words, "Atlanta" and "Trapeze," and found a link to the Trapeze Club.

"Sweet!" I thought. An entire club for trapeze swinging? I love it! 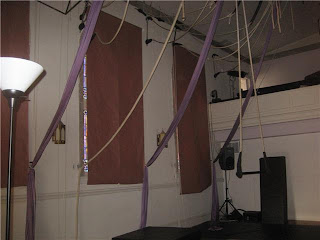 So I clicked on the link, while at work, expecting to find pictures of men and women learning how to fly through the air with the greatest of ease. What I found instead was a risqué photograph of a man and woman in various stages of undress. Since I was at work, I quickly closed the browser, and looked around to make sure no one was watching what I was doing. I was so mortified, and so confused.

In what language that I'm clearly not familiar with, does "trapeze" mean something dirty?

After asking several Atlanta natives (and possible freaks), I learned that the Trapeze Club in Atlanta is not what I was looking for. Instead of learning to swing from a trapeze, those interested in becoming members of Atlanta’s Trapeze Club just wanted to swing. Sexually.

I'd be lying if I told you that a real-life swingers club wasn't absolutely fascinating to me. So much so, in fact, that I forgot what I was originally searching for.

"What goes on there?," I asked those who told me what the Trapeze Club was.

"Do people swap keys and take different people home, or do they take care of business right there?"

"Does it cost money?"

No one could exactly answer my questions because they all claimed to have never been there before (yeah right), but I am fascinated by this alternative lifestyle, and am now determined to learn more about it. Not because I myself want to participate, I’m just interested. I swear.

For a while, I abandoned the idea that the kind of trapeze 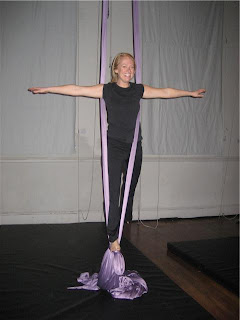 experience I was looking for existed in Atlanta, but recently I went back to Google to try again. This time I used the words, "trapeze," "Atlanta," and "LESSONS."
This search yielded much different, more appropriate results. I was pleased to find that there is a class offered in my neighborhood.

So Day 185's thing I've never done before was to take an aerial fitness class.

I recruited my friend Amanda for this challenge, which wasn't easy. She wanted specific details about what the class was all about. I told her I didn't know much, other than what was written in the description. So I sent it to her.

She perused the website, and discovered the class was held at an old church, and contrary to what she once thought, we would not have to wear flesh-colored unitards. She decided she would go with me.

The next day, Amanda arrived at the church first and she called me as I was making my way over.

I pulled up to the church and together we tried all of the doors together, at one point actually stepping over some homeless guys who were hanging out on the front steps to get inside the building. Only one door actually opened and we walked through it, but the hallway only led us to construction, and no one could tell us where to go for our class.

When we walked outside again, we noticed a door was cracked that wasn't cracked before. We walked in and it felt like we'd finally arrived at our destination. There were ropes hanging from the ceiling, along with purple fabrics, and, of course, trapezes. The instructor, Andrea, and I gave each other a second look when we met, certain that we had met before. We never could figure out our connection, so we decided we probably just recognized each other because we both went to the University of Georgia. Actually she decided that, I’m convinced we met more recently and possibly have mutual friends and I’ve been racking my brain since then to figure out when it was.

Andrea was beautiful and was living proof that hanging from fabrics all day does a body good, so I was ready to get started. I knew I couldn’t possibly leave there in an hour looking like her, but maybe this could be the beginning of a complete transformation.

There were three other people who showed up for the class, one woman and two men who looked like they had been there before. In fact, the men had been there a lot and when Andrea said the word, they started climbing the fabrics like they were ninjas.

Amanda looked at them and then she looked at me with her eyes widened, as if to say, “You’ve got to be kidding.”

Andrea started us at the very beginner level, so Amanda and I took turns first familiarizing ourselves with the purple fabrics. Touching them, pulling them, wrapping ourselves around them. The potential for bodily injury was high here, I quickly realized.

I was, quite frankly, concerned about how these shiny purple sheets were going to support my weight. Andrea assured me that they would, and just like I believe everything that attractive men tell me, I had no choice but to believe her because she was pretty.

I was also concerned about how I was going to get a good grip on them, because after taking a few turns doing various beginner exercises on them, they seemed rather slippery. Andrea gave us some liquid to put on our hands that made grabbing the fabrics a little bit easier. I got a little aggressive with the liquid and poured far too much on my hands and onto the floor assuming that “more liquid” meant “more likely to become a trapeze artist.” No such luck.

For the next hour, Andrea would tell us what to do, then she would gracefully demonstrate it and make it look easy, and then Amanda and I would fight over who had to try the move first, and then we’d take turns humiliating ourselves.

The movements were quite simple, and undoubtedly a phenomenal workout. As beginners, we never really got very high off the ground, though she did teach us how to turn ourselves upside down (there’s something to be said for letting all of the blood rush to your brain) and how to climb the fabric. 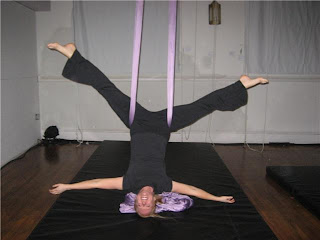 At one point while we were hanging upside down, Andrea instructed us to do sit-ups. She demonstrated, again, with ease, and since hanging upside down was a move I did pretty easily, I figured this sit-up would be a breeze. I couldn't lift myself higher than six inches. Again, gravity is a big ‘ol bitch.

There were times when I became frustrated, unable to understand how I could be so bad at this. I’m pretty flexible, I'm in shape, what's the deal? Sometimes trying new things is a drag, as it’s a reminder of how many things I’m not good at.

On the other hand, Amanda and I laughed a lot, so even if we didn’t get the workout we hoped for, there were calories burned.

But, oh no wait, we did get a workout too, because when I woke up the next day, I discovered new muscles, especially in my stomach and arms that I wasn’t even aware existed.

I told Amanda that once I regained full control over my arms, I'd definitely like to go back and try the fabrics again. Perhaps we could advance a little further, to maybe not laughing at ourselves the entire time or getting more than three feet off the ground. The part of me that believes that I once was a graceful person believes that I could be good at it.

And besides not being very good at it, I really did think have a lot of fun.

Plus, I never actually took a swing on a trapeze, I just played on the purple fabrics, so I still have some swinging left to do. The good, clean kind.
Posted by Stephanie Gallman at 10:47 PM

Email ThisBlogThis!Share to TwitterShare to FacebookShare to Pinterest
Labels: Amanda