Despite the insane sugar rush that left me up half the night (thank you Krispy Kreme!), packing to leave town for the weekend was not something I was able to pull off, unfortunately. After running errands all day, I looked at my clock and noticed it was 7pm. I resolved to go home and get packed and leave in the morning for Charleston, South Carolina, where I was meeting my family and friends for a long weekend.

I called my mom to tell her, assuming that like most parents, she would commend me for making a responsible decision to wait and come in the morning. 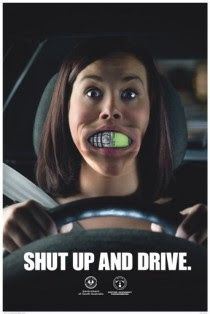 Instead, she expressed her disappointment that I couldn't get my act together and began hazing me to get on the road, despite the late hour.

"Don't you want to wake up here?" she asked me.

Well, yes, I did, but I felt I had missed my window of opportunity to leave, and I still hadn't packed my bag or even started to gather my things together.

"Everyone is coming tonight," she went on, almost whining. And here I thought parents are the ones who are supposed to tell you not to do things just because everyone else is doing them?

"Tomorrow is the only guaranteed nice day," she continued. "You'll miss the good weather if you wait and come tomorrow. What were you planning on doing tonight anyway? Watching television?"

She wore me down. I had no response.

"Alright," I relented, "I'll come tonight. But I still haven't done anything that I've never done before."

That began a back and forth exchange about what things I could do on the road that I've never done. A few weeks prior, I had signed Oprah's "No Texting While Driving," but I hadn't refused to give up talking on the phone in the car. In fact, I save phone calls to out of town friends for interstate car trips because it´s the only time I have long periods of uninterrupted time to devote to the conversation.

"Why don't you not talk on your phone on the way here," my mom threw out.

Five hours alone with nothing but my iPod and my own thoughts to entertain myself?

But thanks to my mom, that was Day 179's thing I've never done before: driving to Charleston without talking on the phone.

Without revealing too much about what a terrible idea this was, I'll tell you I cried twice listening to sad songs, got accused of being "shady" by my friend Maribeth who said I never answer my phone, and contemplated huge life changes ranging from cutting my hair off, to moving out west, to sending that letter that I decided not to send.

If only Maribeth knew that it took all the strength I had not to pull the car over on the side of the interstate and answer when she called. Half the time I was bored to tears and therefore sleepy, the other half my mind was working in overdrive.

For a while I thought my dad was trying to sabotage my goal of staying off the phone. He kept sending me text messages telling me exactly where to go once I got into town. I waited until I was safely stopped at a gas station before texting him back.

"Are you driving?!" he responded, like he thought he got me.

When I arrived, right at midnight, the whole beach house crew was there to greet me and ask me how the drive went, some agreeing that such a challenge would be difficult for them to pull off.

"There's a reason why I shouldn't be left alone with my thoughts," I said, and everyone laughed.

But I was serious.

I'm all in favor of eliminating distractive driving, but refusing myself the ability to talk on the phone distracted me in other ways. Like running without music, the soundtrack of my life is full of bizarre thoughts, and not one I´d like to always be tuned into. I certainly didn´t concentrate more on the road by not chatting on the phone, I simply channeled that focus onto other things.

But for what it´s worth, I have quit cold-turkey on the Texting while Driving.
Posted by Stephanie Gallman at 12:36 PM