On Day 183 I found out entirely too late that it was Passover. I reprimanded my friend and the blog's resident expert on all things Jewish, Lauren, for not telling me that the holiday was coming 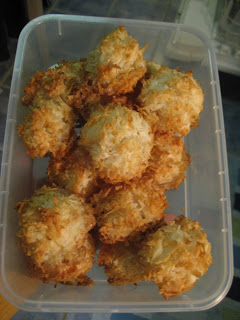 so that I could do something about it (i.e. plan a seder dinner, or work very hard to get invited to one that someone else was throwing).

I decided to acknowledge Passover in my own way, by first watching a video sent to me by my friend Rebecca (who hosted her own seder on Day 183) on the history of Passover.

I did further research and on Day 183 I made macaroons in honor of Passover as the thing I've never done before.

Macaroons are a popular Passover dessert because they're made without flour or leavening. Those celebrating Passover outside Israel eliminate any foods with leavening (yeast) for eight days.

The cookies are pretty simple to make, but I decided to up the ante and make two different kinds. One with coconut, egg whites and sugar, the other with coconut, almond extract and sweetened condensed milk. 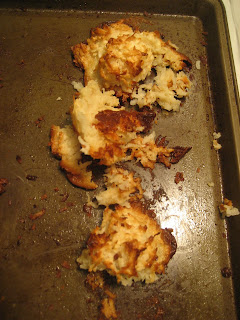 The first recipe, with the egg whites, was courtesy of Martha Stewart and the macaroons turned out pretty well. Light and tasty. Not as life-changing at my King Cake, but still, a solid effort. The cookies were enjoyed first by me, then by my co-workers when I arrived at work the next day.

Why, then, could I not quit while I was ahead?

I wanted to use up all of the coconut I bought, so I proceeded with the other recipe from a website called http://www.southernfood.about.com/ (what the hell is this website, anyway?) This decision turned out to be a colossal mistake. The condensed milk, which I think is disgusting, made the macaroons sticky. They burned when I baked them and fell a part when I tried to move them to the trash.

Lesson learned: stick with Martha. There is a reason why she has her own show. She knows what she's doing.

Other lesson learned: Passover happens every year, so no excuses on forgetting it next year. And if anyone wants to go ahead and invite me to their seder, that would be just fine.

Email ThisBlogThis!Share to TwitterShare to FacebookShare to Pinterest
Labels: Lauren K., Rebecca B.