My hell week at work had started to subside slightly, so Day 193 I was ready to tackle something a little bit more challenging than writing letters to celebrities or thank-you notes.

I was walking through my office and as I was turned the corner, I saw what appeared to be a 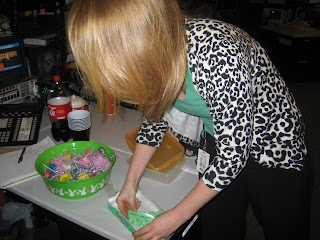 I listened closely and soon discovered that the conversation was even more serious than I had originally thought. Clearly sides had been taken and people on both sides were eagerly making their case to the other.

The conversation was about Peeps.

Having no opinion about the popular Easter candy, and somewhat confused that the little marshmallows had drawn such a large and spirited crowd, I kept walking to my destination, casually mentioning to everyone involved, "I've never tried a Peep."

Participants on both sides finally found common ground in their disgust with me for never having eaten a Peep. They were staring, and some of their mouths were wide open in shock. 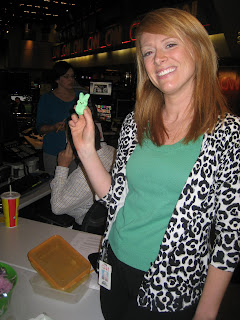 "You've never had a Peep?" someone asked me.

"Well," Jackie said, holding up the container, "Have you done the thing you've never done before for today?"

"No," I said, and I happily breezed back to her desk, making Day 193's thing I'd never done before to sample a Peep.

Cameras came out and both sides looked on, hoping that my first would mean a new addition to their team.

I took a green Peep out of the container and ate it.

I chewed it thoughtfully waiting for a burst of flavor that would force a strong opinion from me on the Peep. But it never happened. 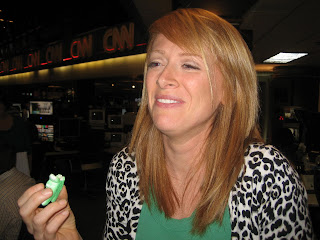 I am apparently one of the few people in the world who doesn’t have a strong opinion about the Peeps. For me, a Peep is what it is: a marshmallow covered in sugar. I don't find it to be particularly flavorful or delicious, but I'm certainly not repulsed by it either.

"I don't hate it," I said, confused that this nondescript thing that I was eating was so polarizing to most people.

I'm indifferent to the Peeps. As far as Easter treats go, I definitely prefer a Reese's Peanut Butter cup or a Cadbury Egg, but Peeps are fine. They're festive and fun.