Having participated in the Cooper River Bridge race so many times, our group has our race plan down to a science. Park the car, run the race, meet at the massage tent at the end and then walk over to Tommy Condon's for a celebratory Bloody Mary and lunch.

Another day when finding something I'd never done before was going to be difficult. Only it shouldn't have been. I had discussed running the race in costume with my friend Mark, who is like a brother to me, but I never got it together. Other suggestions like running as if I was nine months pregnant and pretending to go into labor at the finish line or grabbing random dudes' butts along the race route were both thrown out as well by my mom's friend Meg.

All great ideas, but pulling off jokes like these just aren't as funny if n

o one is there to see them. Since most of our running crew runs at different paces, there was a good chance I'd end up alone wearing the costume, or running by myself from an angry man after I grabbed his butt.

Luckily for me, I ran the race faster than I'd ever run it before, making that Day 181's thing I've never done before: to run a 10K in under 57 minutes. Not very impressive to serious runners, I know, but I was happy with it and worked really hard for it.

My time was good, for me, but not good enough, apparently to beat my 61-year old mother, who ran the race in 48 minutes.

Surprising, especially since I've never seen my mom run a day in my life and if I ever did I'd have to assume it was because someone was chasing her.

My brother and his wife forgot to sign up for the sold-out race, but told everyone they were just going to run the bridge without numbers pinned to their shirts, a practice that isn't necessarily smart, but one that is easy to do.

This idea did not sit well with my parents, the rule-abiding citizens that they are. They probably feared the worst--that they'd later end up bailing their son and his new bride out of jail if they got caught, or worse, that snipers could be circling overhead, ready to taser them for running without a number.

I really didn't think it was that big of a deal, but not wanting to leave anything to chance, my parents agreed to relinquish their own numbers to Jeff and Katie.

I should tell you that my parents "walk" the bridge, which is supposed to mean that they wait until the runners go by, and then follow behind them on a modified route. But after years of walking the bridge the right way, my parents and their friends have created their own route. They get dropped off at the base of the bridge, walk over it, and once they get to the bottom, they veer off the route and either hail a cab or walk directly to the restaurant to meet the rest of us. The window of opportunity for anyone to catch them without a number is so small, that giving their numbers to Jeff and Katie made perfect sense.

Problem solved. Or so we thought.

Instead of the chip thingy that is attached to each 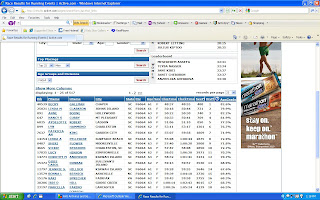 runner's shoe, it was an electric strip on the back of the numbers that was recording each runner's time this year.

So when my brother crossed the finish line wearing my mom's number, it recorded his 48 minute time as hers, making her the fastest female in the 60-64 age division.

When we returned to the house, and looked up the results, we were hysterical to learn that Becky Gallman, according to the Cooper River Bridge Run official results, placed first in her age division.

We praised her strong effort and even presented her with a plastic vase to symbolize a trophy.

Never did any of us think that her "win" would upset anyone. But we soon found out we were wrong.

After returning from Charleston, my mom received a Facebook message (yes, my mom is on Facebook and yes, I'm friends with her and yes, I think it's weird.) from a woman she didn't know. It's often difficult to gauge the tone of an email, but this one didn't seem terribly friendly.

You are listed as the winner of the female age 60-64 age category at the Bridge run 10K with a time of 48 minutes +. That is an awesome time if you ran it, Congratulations. If someone else ran with your bib number please contact . . .

This woman's email made it clear that my mom "winning" her age division may have been only hilarious to us. For all of the other 60-year old female runners who probably trained hard for the race only to get beat by some woman named Becky that no one had ever heard of it was quite upsetting.

My mom ignored the email, hoping she could just let the whole situation blow over. (Forgetting, apparently, that her daughter has a blog.)

She couldn't escape the attention, though. 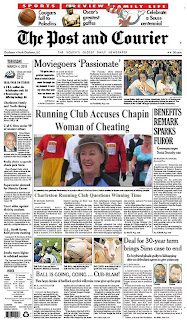 Charleston paper with my mom's face on the cover. She received a congratulatory card from my friend Trish's mom, who had heard about what happened. And our neighbor, who was on vacation in Hilton Head, said he saw her impressive results in the local paper there.

A few days later she got a call from a man in Charleston, who is affiliated with one of the running clubs.

She said she could tell he felt badly for calling to "verify her time," and it was clear he'd been forced into it after receiving an influx of angry calls from runners demanding to know how this no-name runner, who hadn't ever participated in any other races in her life and registered as a "walker" could've accomplished this feat.

My mom told him straight-up what happened: that she'd given her number to her son so that he wouldn't run as a renegade. She said she had no idea that it would cause such a fuss, and apologized for upsetting any of the "real" runners. She said he sounded relieved that there was a reasonable explanation and hoped he could settle the storm.

"Next time," he said, still cautiously,"If you want to transfer numbers, if you could just take that electric strip off the back. . ."

My mom, laughing, told him, "Oh, you don't have to worry. We won't be doing this again."

The moral of the story here, blog readers, is that 60-year old women runners are no joke. Don't cross them. Or at least don't cross the finish line before them.

Posted by Stephanie Gallman at 2:09 PM