On Day 190 had plans to celebrate the end of Passover by consuming an obscene amount of carbs with my Jewish friend Rebecca. She and I have been trying to make plans to hang out for several months and this seemed like a perfectly good excuse to do so. 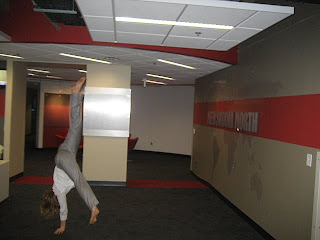 And then work happened.

When it became clear that I wasn’t going to be able to escape the job pile-on, I apologized to Rebecca for cancelling our plans and told her to enjoy her pizza without me. I think this may have been the first time work ever got in the way of a blog activity, though that’s hard to believe because sometimes I think I’m married to my job.

I had to think of something that I’d never done before that I could do at work, late at night, in front of the few co-workers that were still left behind.
I looked at my colleague Chuck, handed him my camera and said, “Can you come with me?”
A strange, downright creepy proposition from a co-worker at such a late hour, I realize, but I was desperate, tired, and delirious.
Chuck seemed willing to play along.
“Stand right here,” I told Chuck, “I’m going to need for you to take a picture of me doing a 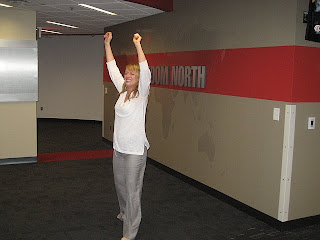 cartwheel.”
I know you’re cringing, embarrassed for me, and I’m pretty sure Chuck was too, but Day 190’s thing I’ve never done before was to do a cartwheel at work.
There wasn’t a lot of risk involved in this cartwheel, because anyone that I work for that might’ve been bothered by it had been home tucked in bed for hours.
Plus, I used to rock some cartwheels back in the day in my backyard at my parents’ house, but it had been some time since I’d attempted one. I wasn’t nervous about pulling it off, though, certain that just like riding a bike, my body would remember what to do.
And despite having been at work for 13 hours, it did.
I’m not positive it was my most graceful attempt at a blog entry, but cartwheels are fun and I promised myself I’d try and do more of them. Maybe not at work, since job security is something that I value.
I also value Chuck’s friendship, which I fear could be in danger after this little stunt.
Posted by Stephanie Gallman at 10:43 AM

Email ThisBlogThis!Share to TwitterShare to FacebookShare to Pinterest
Labels: Chuck, Rebecca B.